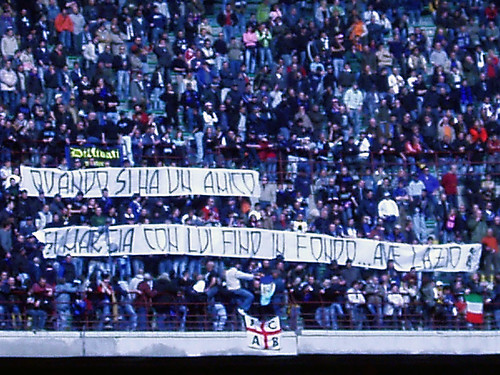 Fascism is on the rise again in Europe as far-right parties take electoral advantage of widespread disillusion with mainstream politicans. Witness the skip-a-generation election of wicked old Jean-Marie Le Pen’s granddaughter, Marion Maréchal-Le Pen (just a rank, I know, but what an evocatively Pétainist name!) while his daughter demands a recount after failing to win a seat by just 118 votes. Where does football come into any of this? Salut! Sunderland’s John McCormick has a scholarly reply, with inevitable reference to Paolo Di Canio, who has just led Swindon Town to League One …

My starting point for this meander was Pete Sixsmith’s passing comment about Paolo Di Canio and Mussolini.

Di Canio has clear links to Lazio, a club renowned and reviled for fascist tendencies among its fans. But where did those tendencies come from? Can they be traced back to Mussolini? Was he a fan, and are there connections between his political party and the club?

I had my doubts, given that every dictatorship I’ve ever looked at has seen sport as a means to an end and attempted to control clubs and governing bodies rather than enjoy sport for what it is, but more of this later. What I found was a rich vein of academic studies about dictatorships (of the right or left) and sport and what follows is only, to stretch that metaphor and pay homage to my roots, a peek down the mineshaft.

Firstly, Mussolini. He was born in 1883 in Prepaddio, a small country town to the South of Ravenna, about 230 miles from Rome and not much further from Turin and Milan, who were the dominant teams at the time. So there’s not much about Mussolini’s childhood to suggest an allegiance to a football club from Rome, or to any club at all.

After taking power the fascists didn’t just get trains to run on time and drain marshes, they built football stadia all over the country (including the Stadio Nazionale del PNF, which translates as the National Stadium of the National Fascist Party) and tried to create teams which could enhance the status of the country.

One such team was AS Roma, created in 1927 by the merger of three smaller Rome clubs with the aim of challenging the domination of the north. Lazio FC opposed the merger and remained independent. So from this premise, there appear to be no links between Lazio and fascism, rather the opposite.

However, the club had attractions for Mussolini. The “Societa Sportiva Lazio”, to give it its full name, was founded by army officers in 1900 as a multi sports club. It had a disciplined, martial ethos, with an eagle as its logo – as did the fascist party.

A lot of its members and supporters of its football team were conservative, and probably sympathetic to fascist policies.

Moreover, one of the architects of Lazio’s independence was a high ranking fascist general, Giorgio Vaccaro, who was made president of the club in order to lead the opposition to the merger. But it may be that a footballer, Silvio Piola, was as important. Piola was, to put it simply, one of the best players in the world, and he played for Lazio. Anyone wishing to impress the populace would find being linked to him, even if it was just by going to games, advantageous. (Much as Tony Blair supports both NUFC and SAFC, see https://safc.blog/2010/04/tony-blair-and-newcastle-united-when-the-truth-hurts/).

Whatever the reason, there are at least a couple of websites which report that Mussolini did become a Lazio fan and that he was frequently seen in the stands, although I couldn’t find any photos on the web that showed him at a match.

Then, of course, came the war and Mussolini’s downfall, and things went quiet for a while. According to Wikipedia, which may be dubious but can’t be any worse than some of the sites I’ve visited, ”Ultras” didn’t rise until the 1950s and they didn’t really get going until much later, including those supporting Lazio. At their best they were, and are, groups of fanatical supporters who travel en masse and put on a display to support their own team and intimidate the opposition. They don’t all indulge in the kind of behaviour we have come to associate with the word Ultra.

So yes, there are historic links between Lazio and fascism, but not enough to explain the racist, antisemitic thuggery which permeates Lazio’s Curva Nord, or to suggest why the club tolerates these fans. I don’t have the answer to that. Maybe you can help.

* With the usual health warning about Wikipedia, echoing John’s point above, this is what it says about Di Canio’s politics:

Since a very early age Di Canio has been a self-proclaimed fascista and has been photographed and videotaped several times giving the controversial Roman salute to Lazio supporters while playing for Lazio.

He created controversy by twice using the gesture to salute Lazio fans, first in a match against arch rivals AS Roma and then against AS Livorno Calcio, a club inclined to leftist politics. Di Canio received a one match game ban after the second event and was fined €7,000, after which he was quoted as saying ‘I will always salute as I did because it gives me a sense of belonging to my people…I saluted my people with what for me is a sign of belonging to a group that holds true values, values of civility against the standardisation that this society imposes upon us.’ … Di Canio has also expressed admiration for Mussolini.[26][27] On the day of his appointment as manager of Swindon Town, the GMB union terminated their financial backing of around £4,000 per season of the club due to Di Canio’s fascist views.

A source quoted in a Robert Chalmers article in 2011 has said: ‘Paolo is not, and has never been […] an ideological fascist. Certain things he has done—like the salute with the Lazio fans—have to do with his psychological history, particularly his former compulsive tendencies and pronounced mood swings.’ Though this would seem to contradict his own declarations on the subject.

** Di Canio’s column in the Corriere del Sport often took the form of writing against the idiocy of racism, Chalmers also wrote. He counts many socialists among friends and says: ‘I don’t vote, I haven’t voted for 14 years. Italian politicians — all of them — think only about themselves, and making money.’

Most of us also recall his footballing brilliance. I chose a YouTube clip that focused on that rather than taking the easy option of hunting for fascist salutes. Swindon? Wikipedia again: ‘On 21 April 2012 Swindon were promoted to Football League One after Crawley Town’s 1-1 draw with Dagenham & Redbridge and Torquay United’s 2-0 loss to AFC Wimbledon, despite Di Canio’s side having lost 3-1 to Gillingham on the same day. He dedicated the promotion to his parents, his mother having passed away shortly after his father, in the April of that year.’

6 thoughts on “Mussolini, Lazio and Di Canio: getting Swindon players to run on time”