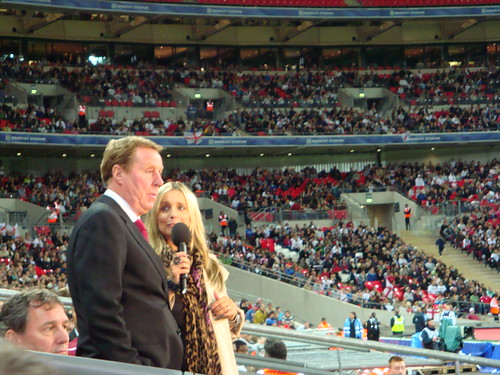 Bombshell or predictable? And now that ‘Arry’s gone, is White Hart Lane on the imminent travel itinerary of Moyes or Hiddink? In the first of two looks by Salut! Sunderland at the managerial merry-go-round, Stephen Goldsmith poses these questions and offers his own answers …

Now then, who honestly saw this one coming?

Well I suppose we kind of did. It had genuinely crossed my mind that there may have been a bit more to what met the public eye when it came to the well-documented delaying of Redknapp putting pen to paper on a new deal.

The daily goings on involved in the saga didn’t particularly enter my natural train of thought on all things football. But then that train was already pretty crammed with the enigma that is O’Neill’s transfer targets and, perhaps more importantly, what will be the extent of funds available to him whatever they may be.

Nonetheless, I was quite curious as to why ‘Arry felt the need to keep speaking about the matter. I couldn’t help sense that all wasn’t rosy in his north London garden; why else would he feel the need to tell us all he would never have allowed anything like this to happen to one of his players?

If he had confidence in his chairman sorting it then he surely wouldn’t have invited this media attention. Speaking to Daniel Levy through the medium of television indicated direct communication was proving problematic. If there was nothing to worry about, it seems unlikely this would have been the case.

Even so, his departure still came as a bit of a shock.

My immediate thoughts led me straight to England. Like Sunderland, the national side are very much in my heart and, as Redknapp was the perceived favourite for the job in the first place, I can’t help wonder whether the FA will feel they have spectacularly missed a trick.

When the unexpected appointment of Roy Hodgson was announced, the immediate kneejerk response was that the FA had gone for the cheap option. Hodgson’s moderate success was generally at smaller clubs and in countries where the standard of competition fails to live up to dizzy heights of the Premier League, though he had mixed fortunes at Internazionale.

He failed dramatically at both Liverpool and at Blackburn Rovers who, lest we forget, were among the Premier League big guns at the time.

Daniel Levy is a notorious tough nut when it comes to finance, as Sunderland have found out, with a knack of getting top dollar for his assets. After trying to buy success by appointing Capello, could the FA really afford to pay over the odds again?

One popuar theory that did the footballing rounds when when England were stuck in managerial limbo was that Stuart Pearce would carry on Capello’s work until the the climax of the European championships. The FA could then bring in somebody with more time to impose his methods, somebody like Harry Redknapp. As the darling of the media, he was the popular choice. The people’s choice even (allegedly). Had the FA stuck to this, if it was indeed ever on the agenda, then they could be getting Harry for a big, fat zero right now.

They insist Hodgson was always first choice. They would, wouldn’t they? I find it hard to believe that anybody on the FA has the footballing knowledge to have studied Hodgson’s methods and made a decision based on them. It is as hard to believe as that Hodgson’s sides are hard to beat (sorry, couldn’t resist that phrase).

But public opinion now seems to have changed regarding Hodgson. Had we lost all three games under his leadership it is highly probable the back pages would have been shrieking that their man Redknapp should have been appointed immediately, that they knew best all along.

That said, any severence package for Hodgson may seem worth paying to those stiffs at the FA now that Redknapp would cost nothing, at least before he started collecting his salary. If England should lose their next two games, it will be very, very interesting how the media will react. The king is dead, long live the king?

I feel Hodgson could have done without this.

We, as a nation, are just starting to warm to good ol’ Roy, but the longer Redknapp remains out of work, the more that certain people will want him.

Like everyone, I have absorbed all Hodgson and those who know him best have had to say. We have all seen his ideologies implemented with England in each of his three matches to date and can be under no illusions that any diversion from what we have seen will be other than minimal.

But this does appear the most pragmatic and viable option for England with the squad we have.

I will admit to having wanted Redknapp initially. His attacking football appeals to me. And perhaps my judgement was clouded by wanting the polar opposite to Capello’s soul-destroying footballing philosophy. I have never been as disheartened with England as I was with Capello at the helm. From somebody who has travelled Europe to watch them play that is saying something.

In hindsight I can’t help thinking that Redknapp trying to impose his attacking intentions on the standard of players we have available would have amounted to footballing suicide. England à la Kevin Keegan, if you will.

But bvck to Daniel Levy. You have to question his thinking and strategy behind the timing of it all. Was he putting this off at the back end of last season in the hope England would still come knocking at his door bearing gold? Has he put it off up until now knowing fine well that Liverpool, Villa and Swansea were looking for managers? Could it even be the case of “I don’t want him but don’t want anyone else to have him”?

David Moyes is the bookies’ favourite to succeed ‘Arry. I would love to see Moyes test himself at a club with the money and genuine potential to be a real force. You wonder when his patience with Everton will run out. As big as Everton are, they appear somewhat frozen with a chairman who, certainly from the outside, seems to be asking for ridiculous money for a club that will need a new stadium upon purchase.

The bookies may feel sure this was on the cards months ago and that contact has already been made. By the time this has been read by some, it may even have happened. Levy isn’t the most loyal of chairmen, though, and I’m not wholly sure Moyes would fancy it for that reason alone. Everton are often in the bottom six or seven at christmas before having a late surge. Levy won’t stand for that, and hasn’t previously stood for it, and all Moyes’s effort and time spent building and reconditioning the team could be knocked down on a February whim.

My own feeling is that they will go for Guus Hiddink.

Like England, Liverpool may well feel they have missed a trick here, too. I expect Rodgers to show little in variation from the brilliant to the woeful. If he starts to falter, or maybe if he just doesn’t hit the ground running, Liverpool fans may well cast an eye on Redknapp developments. His attacking football, and the progression he managed at Spurs, seem tailor-made for them. I am in no doubt that a large slice of the Anfield loyal would have been overjoyed to see Redknapp thrust into the famous hot seat.


And what of Chelsea? Redknapp was linked heavily to that position last season. Levy’s timing couldn’t be so precise that he was awaiting on their new managerial announcement, could it? We have heard to a tedious degree how defensive Di Matteo’s Chelsea were in European success last season whereas Redknapp’s sides play with a flair that seem right up Mr Abramovic’s street.

I think Lambert will do well at Villa and am fascinated to see what Michael Laudrup brings to the table at Swansea. It all makes for exciting times but I’m not so sure either would have appealed to Redknapp.

Sunderland fans know as much as anyone what positive momentum can be built from an exciting managerial changes. It must also be nice to have a manager who performs grandly year in, year out at the helm, managers such as Moyes and Redknapp…

The Black Cats have the best of both worlds in that respect.

Martin O’Neill’s reign seems to be at a perfect and exciting phase to us still. It appears to be still in its infancy in terms of seeming fresh to the fans and players alike; the season’s end coming at a satisfying time in halting what seemed a bit of a slump, yet drawing to a close what still seemed a general upwards momentum in the club’s fortunes. The positive feeling created by O’Neill should be further amplified when he imposes himself on the club to greater effect over the summer by improving the playing staff.

I have managed to refrain from worrying about transfer speculation sufficiently to prevent insanity thus far. That’s down to a cracking summer of international football. And this management madness certainly helps too.

29 thoughts on “What now for Redknapp and Spurs? Have England, Chelsea, Liverpool missed out?”