Observant readers will recall the excellent report, from a Swansea viewpoint, of last season’s 2-0 win for Sunderland against his team. The writer was Peter Thomas* and the piece was reproduced from his site Pierre91 in a Day. So it seemed natural to invite him into the “Who are You?” chair ahead of our visit to the Liberty Stadium. Peter, “a Clause 4 Socialist who gets angrier and more radical by the year”, talks about the Swans’ outstanding start to the season, the Sunderland player he’d take “in a heartbeat” and Michael Laudrup’s “stellar” signings …

Salut! Sunderland: A riproaring start at QPR (and then at home to the Hammers). Can you honestly say you saw that one coming?

As I’ve written on my blog, I could not. My feelings were that we would do well to come away from QPR with a point. After all, our record at Loftus Rd stretches back some years, almost always unsuccessfully, and last season saw us turn in what was generally considered by ALL Swansea City fans as our worst performance of the season (we lost 3-0) and I’ve many unhappy memories of the 80s, when we were regularly spat upon there – not a nice place in my memory. So, when the team performed so well, the 5-0 win was a real treat. Needless to say, I’ve engaged in some worthwhile banter with some Rs fans who were pre-match baiting us. I’m a believer in the concept of football karma – what goes around often comes around – often, to HAUNT you. Woohoo.

I imagine one or two pundits marked you down as relegation candidates but after a very bright first season back in the top flight, you must be feeling confident that you can now establish yourselves.

I honestly think that we have a realistic chance of retaining our status as a PL Club. That would be a magnificent achievement, and it ties in with our realistic board’s attempt to make our PL adventure long-term sustainable. Already, work is underway to develop an Academy facility at Landore, and a Club Training Facility/Sports Science centre at Fairwood in conjunction with Swansea University. This, coupled with phased Stadium Development is surely what the PL fruits should be used for, so that we have some sort of that cute word “Legacy”. I’m not foolish enough though to forget that NONE of this comes without retention of PL status, so the team must also develop. Thus far, it has, and is. As far as pundits go, we Swans have a lot of time for Lee Dixon and the MoTD2 team last year, and less for Mark Lawrenson, but I have to say that Lawro’s constant predictions of a 2-0 loss for the Swans spurred us on some. I think the only time he was right was at your place last year! Ouch!

How big a blow was the loss of Brendan Rodgers and do you feel he will become a good manager at Liverpool?

Losing BR was a blow, no argument, not least because it wasn’t the first time it had happened to us. Whelan sucked Martinez to Wigan, Sousa’s flit to Leicester was less of a shock and may have suited us, but BR had got us into the Division, so it was initially perceived as a body shot. However, our fantastic chairman and board, Huw Jenkins and colleagues, pulled another rabbit from the hat, and Michael Laudrup’s appointment was really well received by the fan base. I honestly think that BR needs to be given at least three years at Liverpool – if the fans and Board have enough patience, he will undoubtedly succeed, and pull their club nearer to where they believe they belong.

Who will be your key players this season and where do you still need strengthening?

Laudrup’s initial signings have been stellar. Chico Flores for the impressive Steven Caulker at CB promises to match SC’s achievements and turn into a “cult” player- one who gives his all and we fans love it. JdG for Sigurdsson is again a quality replacement- less goals but more skill- and this week we signed S Korea’s Ki Siung Yeung from Celtic- and he is a terrifically gifted and highly rated player. In the background, we’ve also got in several low key but developmental youngsters – Proctor, Bartley, Scheckter. And then there’s Michu – Miguel Perez Cuesta was last season’s 17 goal scoring MF’er from Rayo Vallecano and he has been a delight to watch- when you get a realistcally quality MF’er with style, who scores the sort of goal that you saw in his second at QPR, it’s a real buzz. We stand to lose Sinclair to Citeh, but since his replacement is likely to be Pablo Hernandez from Valencia at less than Scott’s fee, I’ll settle for that. We’ve been linked also with Miku at Getafe, and Alvaro Vasquez at Espagnol, but I suspect that you’re in that game too, and may out-trump us there. Whatever, I’m happy.

Is there anyone in the SAFC squad you’d like to see in your team?

I’m hugely impressed by Stephane Sessegnon, I’d take him in a heartbeat, and Mignolet is a quality keeper. I think Fletcher is a quality signing – he and Jarvis for Wolves last year terrorised us in the crazy 4-4 draw at the LIB. Since you’re offering, I suppose we’d take Adam Johnson and Sebastian Larsson off your hands – they show a lot of promise!

My over-riding memory is of last year’s defeat at the Stadium of Light – late in the second half, already 1-0 down to Sessegnon’s worldy – the crisp papers and tissues swirled around on the pitch as the wind whipped in off the North Sea – and Craig Gardner lashed in ANOTHER WORLDY. It’s true to say my chin hit my chest.

Did the success of the Olympics leave you a little blasé about the return of football or were you raring to go?

I thought the Olympics were fantastic.I was always a sceptic – cost, location etc… but got really caught up in the feel-good fever that seemed to reach all of the nation. (God bless Danny Boyle, btw, for starting it off right.) But, but, we’ve ALL got only one true love, so when football came back I was itching for it. Olympics = Good. Football= Better.

Will we ever stamp out cheating or must we accept it as part of the game? Who are the worst culprits, individuals or teams?

We’ll never ever stamp it out, but we can try. We must NEVER just accept it. Think back to the 80s, when Leeds, and Revie, encouraged players to stay down to “kill the attack”. It was ever thus. Divers nowadays? – Ashley Young, Christiano Ronaldo and Didier Drogba was the cutest of the recent variety. Teams? I’d never, ever, trust Man Utd whilst SAF is there, he has more faces than the Town Hall Clock.

Peter Thomas’s own preview of the game will appear here tomorrow … why not bookmark the home page at https://safc.blog?

Best player/s you’ve ever seen in Swansea colours and any who should have been allowed nowhere near them.

Ivor Allchurch, Alan Curtis, Robbie James, Leon Britton, Ferrie Bodde, and I suspect I’ll get to adore Michu, Miguel Perez Cuesta. ALL players who’ve played for us have my admiration. I just don’t believe in bad-mouthing people who’ve tried on our behalf. Some are better than others, but they’ve all worn the shirt with pride. Respect.


Club vs country, in your case Wales of course. Who wins for you and why?

It’s club for me.I guess it’s because I have a weekly and enduring connection with the club. Whilst the national side have been better of late, it’s the distance between national games – by the time Wales play next, I’ll have suffered the lows and highs of a weekly fixture in the “best League in the world”. Whether you agree or disagree, you must concede that it’s fun in the extreme, and beats the “blank weekends” thrown up by the FIFA fixture list.

Name this season’s top four in order and the bottom three.

Where, if not in either list, will our clubs finish?

You will be 10th and maybe upwards. We will be 11th to 14th and hopefully settling into the Division. We are having a ball.

I will indeed be at the game. I sit in G120, Lower West Stand, and I’m looking for a Swansea City win, and 2-1’s my prediction. 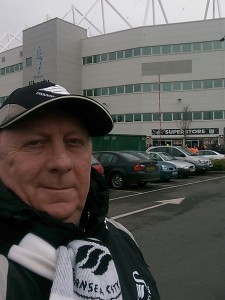 I’m a 62-yr-old retired teacher, who saw his first Swansea City game in 1963 at the Vetch Field against Ipswich Town. I write a weekly Swanseacentric blog at http://pierre91.blogspot.co.uk/ that both previews matches and reports on the subsequent game. I also write for two of the best Swansea City fansites – http://scfc2.co.uk/, which is run by Jim White, the vice chairman of the Swansea City Supporters Trust, http://www.swanstrust.co.uk/ , and Planet Swans, a site run by Phil Sumbler, the chair of that very same Swansea City Supporters Trust (Jim and Phil contributed superb “Who are You?” interviews last season – ed). As a 20 per cent owner of our current club, this was the organisation that saw us 10yrs ago almost to the day help in the rescue the club from the brink of oblivion.

I have always admired your club, from it’s “Bank of England” history through to it’s current situation, with your admirable ex-chairman Niall Quinn, the current combative manager Martin O’Neil and your wonderful, top-class, working class support. We will never be as big a club, but if we can work toward it I’ll be delighted.

All the best for Saturday – enjoy the game, and may the best team win.

3 thoughts on “The Swansea City v Sunderland Who are You?: ‘we’re having a ball’”

Next Post
Morecambe Soapbox: banana skin avoided, now on from Shrimps to Swans