This is Rob Hutchison‘s entertaining account of a memorable stay in Canada that had almost nothing to do with SAFC, beyond the passion he and his his host, Salut! Sunderland’s resident controversialist, Jeremy Robson, share for the club. It was written a few months ago but then went astray in email exchanges. Now it resurfaces with its story of fabulous hospitality, Sunderland-related reminiscence and good music – and it deserves an airing however belatedly. Monsieur Salut could add his own testimony to the fierce and impressive loyalty of Gareth Hall’s daughter – he ought to be proud of the way she sticks up for him – but won’t for now …

I’ve been subscribed to the Blackcats e-group community since the late 1990s. Living in London I found it a wonderful way to keep in touch with exiled fans like myself long before the advent on Facebook and Twitter. I’ve met quite a few of the lads on there either through London Branch events, or a face in the crowd at away games.

A few people you know are flung beyond our shores, but you get to know them through the thoughts in their post match posts, opinions of certain players/things, and personal traits that come out through the course of time, along with the vibrant Blackcats sense of humour.

It’s also an invaulable source for IT info, watering holes, music recommendations, and generally anything most normal people would find irrelevant.

Well on Boxing Day, Van Halen announced they would be touring the US in the spring in support of a new album with Dave le Roth for the first time in a couple of decades, so safe in the knowledge that European dates would not arise for some time(or ever), I decided to get myself over to Toronto and treat myself. 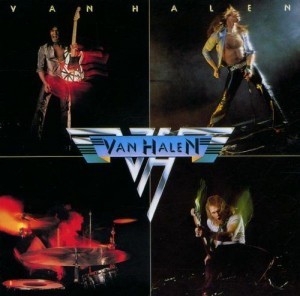 Why Toronto? Well, one of my music industry suppliers is based there and sorted out the tickets, but more importantly here was the opportunity to meet up with the lively and strongly opinionated Blackcat poster, one Jeremy Robson.

Jeremy, is most certainly not a lurker. We’ve known each other through Blackcats now for some 15 years now, and whilst we don’t agree on some SAFC issues, we both row in the same direction.

I dropped him a line and he kindly offered to put me up for a few nights. As time grew closer, a shopping list of UK Mint Aeros and Mars bars (a far superior grade, so I’m told) and some Salut! Sunderland goodies was collated, and before I knew it, meeting times and places agreed, dodgy photos exchanged and I was heading over the Atlantic thanks to Air Canada for my appointment with Mackem mayhem, and Van Halen. I could imagine how things might go wrong.

“Why are you visiting Canada, Mr Hutchison?”

To go to a rock’n’roll show!

“Where are you staying during your time in Canada?”

“Did anyone ask you to bring anything on the plane with you?”

Aye mate. I’ve got six jumbo packets of Mars Bars and some Family Size Aeros, if that’s what you mean.

True, but best not tell the passport control chappie that eh?

Flight arrived slightly early, got through customs quickly, walked through the departures door looking for a predicable greetings sign I was promised would be there. Not a soul was holding up anything, not Fabelmo, no SAFC crests to be seen, nothing.

After half an hour I was getting a bit twitchy and then a text came through “there in 5 minutes”. 15 minutes later nowt, then “where are you?”. This didn’t seem good; wrong airport immediately flashed through my mind, bollocks. After another half hour, we establish that the plane had arrived a different terminal, so I stood still, and a few minutes later Jeremy dash through the doors, with his son Dave (dyed in the wool Canadian mackem now I’m pleased to say) in tow, and hand made sign waving frantically.


An eventful start to the weekend, we drove back to J’s pad, spending the hour getting to know the respective face behind the e-postings. One thing about Sunderland fans, they go the extra mile for their own, and treat their own like royalty. Nowt is too much botha, for the red and white bond is deep and strong. Jeremy’s missus had a wonderful tea ready for us when we arrived back, the adrenaline knocked the jetlag into touch, and we chatted away until not far off midnight on everything SAFC, Blackcats, fellow fans, Bruce, MoN, SoL, Ellis and everything else vauguely red and white, and an awful lot more besides.

This continued next day. Jeremy’s hospitality continued to be impressive as we took in an excellent curry buffet in his local town Guelph, almost as good as the Indian restaurant that used to be above FineFare on North Road in Durham. Again we sat up late into the evening remembering mutual games that were atrocities over the years, revisiting some classic stories either of us might have missed . . . .

Gareth Hall’s daughter writing to complain about his treatment in ALS, various abuse Jeremy had dished out over the years to players taking throw-ins near the clock stand, why Terry Butcher had no knees, etc etc.

Friday I departed for a couple of work meetings in Toronto. Saturday morning at 8am I was flicking through every channel in the Toronto Hilton to final a channel broadcasting the Everton Cup QF. Bugger, no luck so I was relying on twitter for updates. Thank you 21st Century technology, oh thank you. The game came and went, happy with the draw at the end. We’ll dick them back at SoL (what did I know?). 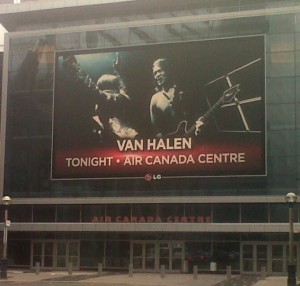 And come Saturday afternoon, resplendent in home colours, I met up again with Jeremy and family for a massive rare steak (cut off its tail and wipe its backside), perfection. Off to the Van Halen gig which was simply stunning: gig review here.

M Salut adds: you can buy Van Halen albums by clicking anywhere on this sentence at the Salut! Sunderland Amazon link.

I was collared by a Canadian Liverpool fan who complemented us on on recent win over them, and who enquired whether we would take Jordan Henderson off their hands along with Dinah Carroll. Cue fits of laughter.

On leaving the show I was almost ready to head back to my hotel before the flight back the next day, but I was struggling to take the wonderful few days in.

Only thanks to Blackcats and the internet could this have happened. I left having great friends on the other side of the pond who I felt like I’d known for a lifetime. Sunderland may be the common bond, but Sunderland fans are something genuinely unique in warmth, hospitality and humour. The weekend will stay with me for many many years to come. 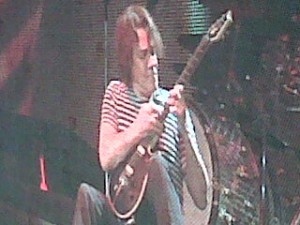 Next Post
A year in Sunderland’s life: things we may never know