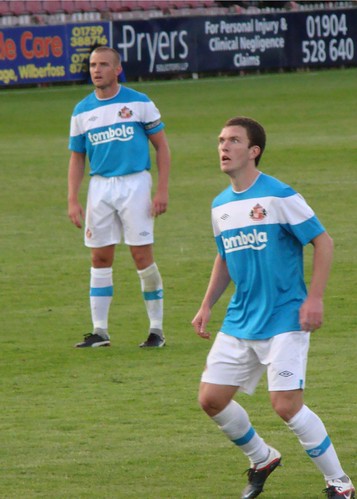 While we may be uncertain about exactly who “they” are, this old adage does tend to ring true when the subject happens to be the modern footballer.

Sunderland have had more than their fair share of personas non grata in recent years ranging from the unpleasant to the downright distasteful and frankly disgusting, ranging from the antics of Bendtner and Cattermole in Stowell Street and (Bendtner) Copenhagen Pizza joints to the carnal leanings of Messrs Brown, Alnwick and Lawrence recorded for posterity on a mobile phone.

It’s both refreshing and heart warming to see even the odd example of these privileged and well paid young men (some would say overpaid and who really disagrees?) taking the time to do something to help others. How many of them are like that? The truth is that we don’t really know.

In recent times the media have picked up on some of the genuinely good things that one of our first team regulars has been up to.

Craig Gardner, it appears is a really good egg. In today’s Independent, there’s an article about Craig’s off field efforts with the “Foundation of Light” at Biddick Junior School in Washington, where he is happily participating in activities from would possibly make many of his peer squirm, as he impersonates a variety of “beans” (that’s right, those things that come in tins and covered in orange goo, and the other kind you may grown in your garden): http://www.independent.co.uk/sport/football/premier-league/one-of-the-good-guys-craig-gardner-cultivates-games-better-image-8163765.html

Later in this same article, there’s reference to Craig’s generosity to children who have been born with severe disability or have suffered the ravages of disease. He’s quoted as saying “It’s horrible for them. I’m not an emotional person. I’m quite strong and hard-faced but I have a soft side to me as well.”

Yes, Craig you certainly do. There are two sides to Craig Gardner all right. We can all see what a decent and caring lad he is, and we should take great pride that this type of character is taking the field for our club. We can be pretty sure that his “soft side” will not be on display to members of the opposing team on any occasion. Craig probably doesn’t want thanks for what he is doing, but well done anyway.

9 thoughts on “The Robson Report: Gardner as Mr Bean. And guess the Wigan score”

Next Post
When Salut! Sunderland goes on tour: the Cattermole debate moves to ESPN