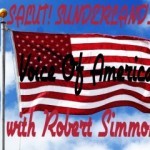 Regular contributor Robert Simmons continues his mission to turn as many American citizens as possible into die hard Mackems.

I think it’s beginning to happen. I honestly never expected it to, and I certainly didn’t expect it to happen this quickly. I think American fans of European football are coming around to the idea that there is more to the beautiful game than supporting a team with a payroll the size of some small countries. I don’t think clubs like our beloved Sunderland are going to instantly have a huge following here in the USA, but I am beginning to notice a shift in the perspective of American fans. In the past few weeks two things have happened that have led me to this discovery.

First, when we played Liverpool two Saturdays ago I threw a party. A co-worker of mine is a big Liverpool supporter and we invited lots of friends and colleagues to watch the game with us. Each of us presented what we thought were persuasive arguments of why our team should be supported to the group of about 20 who showed to watch. After sitting through a rather dull 5 minute presentation by my co-worker I went on to wax eloquent about the city, the club, and the supporters of Sunderland. I know I am very new to the scene and know much less than I’d like to, but support swayed heavily in my direction and 15 of us sat on the Sunderland side of the room cheering and singing away. This got me thinking, I believe that most fans in America choose a team because they’ve heard of a player or seen them on TV, but they don’t put much thought into it. Once a half-decent argument is presented to them on the joys and suffering of a faithful mid-table team, most of the fans (who are all pretty knowledgable sports fans) sided with Sunderland. My persistence is paying off.

Secondly, last week there was an article written by Jonathan Wilson on the front page of foxsoccer.com. As usual with Jonathan’s stuff, it was well written and thoroughly enjoyable. What was most interesting was that 8 of the 14 who joined in cheering on Sunderland with me against Liverpool emailed or texted me about the article. They are beginning to follow. Even more interesting than that, 3 friends who support Chelsea, Man United, and Arsenal respectively texted me saying how captivated they were by the article. None of them disowned their clubs and pledged allegiance to Sunderland (even if they damn well should have), but all of them acknowledged that supporting Sunderland offers something intangible and yet very attractive that supporting their clubs doesn’t.
Needless to say, I am walking around with an immense amount of pride as being one of the few but growing number of Sunderland fans in my part of the world. Even with a slightly slower start to the season than I was hoping for, I think the Sunderland revolution is beginning to grow here in the States. Hopefully we’ll pick up some points this weekend and the rest of the country can learn how to #PartywithMarty with me.
Robert’s site is http://onlysafc.blogspot.fr/

8 thoughts on “Voice of America:How I got my buddies to choose Sunderland above Liverpool”