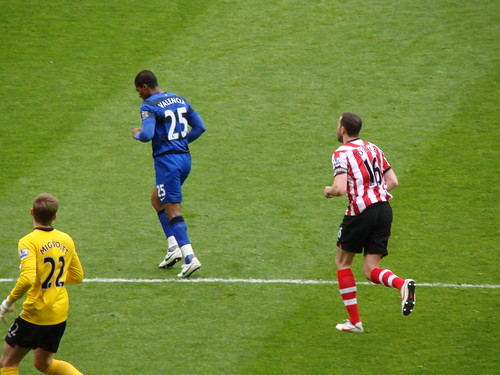 A satisfying week then for Sunderland fans. A run of mainly draws and the odd defeat that stretched back to March that no one at the club seemed particularly bothered about has now come to an end versus Wigan, and the glass is now half-full.

Despite the disappointment of dropping a point after leading for most of the previous league game at West Ham, some real positives came through. Notable was the performance of John O’Shea, who is clearly enjoying his time at the club; he really caught the eye.

We have joined Man City and Chelsea as the only unbeaten clubs in the Premiership, with a win and four draws in what has been a tough start to the season. Two great sources of encouragement so far for me – obviously Stephen Fletcher’s scoring form, and the fact that the defence has been solid.

Fletcher has shown himself to be a quality acquisition, excelling under the pressure of having to impress in a new playing environment.

He is clearly revelling in it, and has even patched up his differences with the Scottish national team boss Craig Levine (but could do with a driver for the next six months after picking up a totting-up ban – ed). This is all positive, with Fletcher’s arrival a particular tonic when we looked at one stage as if we were starting the season without a proven Premier striker.

In the scoring charts he is in the esteemed company of Robin Van Persie and Luis Suárez, with only a certain Demba Ba from the deluded barcodes ahead at this stage.

The case for the defence is also strong, despite the injuries to the gifted Phil Bardsley and Wes Brown, the departure of Kieran Richardson and Michael Turner, and the recent introduction of on-loan full back Danny Rose. Testimony to our solidity is the fact that we have never been behind in a game so far, not least because of the excellent form of Simon Mignolet between the sticks, and the excellent contribution of Craig Gardner at right back.

The main point, as I see it, is that with the present choice from John O’Shea, Carlos Cuellar, Matt Killgallon and Titus Bramble for centre backs, we are very well covered in the middle of the defence. Bramble put in an excellent performance against his old club at the weekend.

And this leads me to look back at some of the great centre backs that Sunderland have had over the years.

These are players who do not just perform their jobs as players outstandingly by dominating the penalty box, but have also been great, resilient characters who could pass on their drive, determination and infectious will-to-win to the whole team.

Centre-backs I have seen play for the Lads that stand out are Charlie Hurley, Dave Watson, Jeff Clarke, Ian Atkins and Gordon Chisholm as well as Emerson Thome.

To join this parade of legends you have to have not only one or two great games, but several great seasons. These players used to be called “pivots”, and although that term has fallen out of use, in a real sense the whole team would rotate and function around them, such was their importance.

The players listed above shared similar traits, being:

* great tacklers, who can anticipate the play

* excellent in the air

* leaders of the back line, who do not know the word “defeated”

Emerson Thome had a nickname of “the Wall” and I really saw him in action from close range side at a 2-0 win at West Ham in early 2001. The whole back four were a unit that day, but Thome was particularly impressive alongside Jody Craddock, Mickey Gray, Chris Makin with Thomas Sørensen between the sticks. We were right down at pitchside and could hear the players driving each other on and actually communicating among each other, so important.

From the current team I believe that all three of our current fit centre halves, John O’Shea, Carlos Cuellar and Titus Bramble can join that list. They have most of those qualities I outlined, but one could just wish they were five years younger.

* Salut! Sunderland offers its customary thanks to The Roker End, a commendable website featuring former players of SAFC, for permission previously granted to reproduce photos that appear there.

Next Post
Manchester City v SAFC ‘Who Are You?’: yearnings for ‘liddle old Citeh’