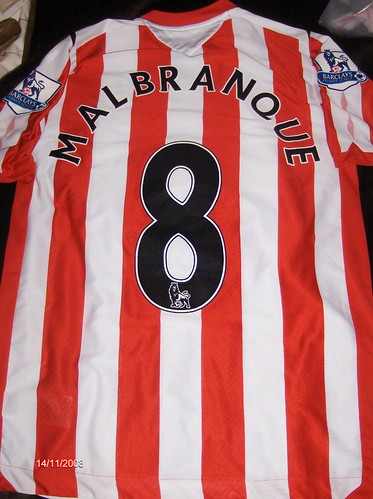 The word to describe a strong contender for Lyon’s man of the match – again – was chosen by Paolo Biggeri, Sport24.com’s man at the match. And he quoted the OL keeper, Rémy Vercoutre, as saying Steed should be called up for the French national side.

Footballing clichés know no borders. Vercoutre said it had been a pleasure to play the Corsicans because they did not arrive in Lyon pour mettre un bus devant les buts. And without that bus parked in the penalty box, they quickly went two down, recovering to 2-2 before Steed and Co marched on to a comfortable win with sendings off reducing both teams to 10 men.

Steed made the fourth goal and scored the fifth, from a penalty. Memory failed me so I asked at Twitter if he had ever taken penalties for Sunderland. I was quickly put right, by three other supporters (@Glenneth__, @Graeme86FTM and @Herring_SAFC), who remembered that he took and missed one against Stoke (the 2-0 win two years ago).

I make this appeal: if a national coach ignored age and track record, he;d have to pick Malbranque. I’d really love to see him called up. It’s going to happen so and he deserves it so much. He’s our Mr Big, our Mr Extra. I really hope he can quickly be part of Les Bleus. As for the start of the Ligue 1 season, there’s no one to touch him – he is the best!

Makes you think of our own midfield, n’est-ce pas?

Brilliant for Steed, a sobering reminder of what we lack. OK, he wasn’t always like this for Sunderland but although people often dismiss the French top flight, we are talking about a team currently lying third, only a point behind the leaders Paris Saint-Germain.

Talking of PSG, admirers of level playing fields will have been delighted to see they not only lost at home – 2-1 to Saint-Etienne – but had the big, bruising and lethal Zlatan Ibrahimovic sent off for a wild high lunge that connected with the chest of the Saint-Etienne keeper Stéphane Rusffier. No matter; I fear that with their pots of Qatari dosh, PSG will still win the title by the clearest of margins.