Jim White* is a happy Swansea City supporter, vice-chairman of the Swans Trust that part-owns the club, the owner of his own email marketing company and the man behind the leading Swans fan website SCFC2.co.uk. He is loving life in the Premier (and since writing this a trip to Wembley – ed) just as much as when he was last here and will be flying high, up in the sky, to keep the white flag flying at the Stadium of Light …

Salut! Sunderland: My fellow ESPN writer, the one who covers Swansea, gave your club 10/10 in his mid-term review (my mark for Sunderland was 5). Spot on, or was he going a little too far?

I think he was pretty much right. I would have given us 9 out of 10 at the half way stage, to be honest but we will take that! The score is fair based on the upheaval we had during the summer. We have had to change our manager again and lost 4 of our first team players (Caulker, Sinclair, Allen and Sigurdsson) and everyone expected us to experience 2nd season syndrome. So to be 9th and in a Cup Final come the third week of Jan is about a 9.5 out of 10!

Whatever your answer to that, the Swans’ form has been outstanding since promotion and has continued under Laudrup without the Rodgers departure mattering a hoot. Which of them deserves the lion’s share of praise?

The praise at Swansea City is always given to the managers which is fair to an extent but fans from other clubs don’t see the infrastructure and philosophy which the club have set up which makes things work for these managers. Huw Jenkins and the board set that tone and outline the way in which they want the club to play and then managers apply that. Every manager we have had has added something to us. Martinez started a type of play, Sousa made us defensively strong, Rodgers adapted that and Laudrup has taken us on again!

Who else has been crucial to Swansea’s progress? And how does the club sell South Wales to the Wags?

I guess I have answered this in the above question and all Swansea fans are happy that we have a Chairman and day to day executive that treats club money like his own. We also have a strong head of recruitment (David Leadbetter) who works alongside the Chairman and Management team to help us bring the right type of players in. Swansea Legends like Alan Curtis also give the club stability but the reality is Swansea City’s growth is a collective achievement rather than the work of 1 man or woman

How far do you honestly think the club can now go? And with what emotion do you view the strong possibility of Cardiff being promoted?

In terms of how far we can go then no one at the club is setting expectations too high. If we can stay in the Premier League for the next few seasons then this will be fine for us. We will use the income to grow off the pitch (we have spent on an academy, a new training complex and have plans to extend our stadium) and try and stay as competitive on the pitch as we can and establish ourselves in the premier league. We all want to see us get higher and higher but reality for a club of our size, survival is the key for the next few years. As for Cardiff being promoted then if they do go up (and they should from this position but they have bottled it in the past!) then some will say its good for Welsh football but most (inc me!) will say I would rather it not happen but if it does, we will be grateful for the 6 points ? – they will find it very hard in the Premier League I think as Reading have seen this season

Who are the greatest players you have seen – or wish you’d seen – in Swansea colours and who should have been allowed nowhere near them?

Robbie James has always been my all time Swansea favourite. I only saw a few years of him when I grew up but he was awesome and my Swans hero as a child. Leon Britton is fast becoming my modern day hero. He has become a Swansea legend over the years and we all hope he will carry on with us for a few more seasons and get to 500 appearances. We spent many years in the lower leagues and so we have seen plenty of dodgy players earning a crust for us. Picking one is difficult but it would probably be a forward called Aiden Newhouse! Awful!

I do and don’t! The vetch was a wonderful, traditional football ground that had an amazing atmosphere and there was something special about going to see football there. However, we would not be where we are now unless we had moved and we are now making the Liberty Stadium our new fortress

Can you share some thoughts on Sunderland – the club, Martin O’Neill, the fans, the region? 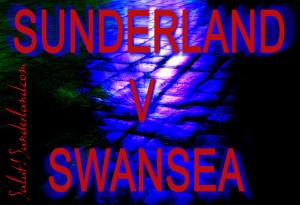 The north east is a hot bed of football and it’s clear that you fans have an incredible appetite for football. I actually have a link to Sunderland as my Dad’s father (who died before my dad died) was from Sunderland and so I may even have some relatives up there! I have to say that I thought Martin O’Neill was going to do an amazing job for you but it all seems to have gone a bit flat for him if I am honest. The challenge is always expectation levels with 40,000 fans I am sure but in fairness to him, he has had money to spend (you spent £22m in the summer on Johnson and Fletcher) but whether he has spent it wisely or not, time will tell!

What were your impressions when we drew 2-2 at your place early in the season?

To be honest, I thought you got away with it. You had 2 shots on goal all game and scored from both and so we felt disappointed not to win the game. However, you also showed your PL maturity by getting the draw and Fletcher did look decent on the day. You seem to be hard working but to me lacked that bit of quality which can open up Premier League teams but maybe this was just something I didn’t see on the day?

What will be the top four in order this season, who is going down and where – if not mentioned – will our clubs finish?

Man U, Man City, Spurs, Chelsea will be the top 4. The bottom three will be Reading, Villa and QPR. I think that we will finish around 10th and Sunderland 12th

Has the time come to accept cheating as part of the modern game? If not, which form most appals you and what would you do about it?

No not at all!!!!! I think that gamesmanship is now part of the game but cheating is cheating and deserves to be punished. The worst of the lot for me is manly, strong lads acting like Walter the softy when tackled or challenged by another player. I hate this kind of behaviour and when they use it to get others sent off, I think they should be retrospectively fined and banned. That is the only way to stop it happening in the future

Which single step should Swansea or the football uthorities take to improve the lot of the oridnary supporter?

I think that we all want to see ticket prices become more reasonable. In tough economic climates, we need to ensure we help fans as much as we can

Is the Club versus Country argument fought as keenly in Wales as in England? Who wins for you and why?

We are all very proud to be welsh and I used to go away a lot to watch Wales. However, seeing Cardiff fans attack Swansea fans overseas (I have been threatened myself) makes the experience not worth the while and sad that it is but I think many feel like that now. I want both to win for sure but if I had to choose then it would be Swansea for me. They are the team that are really in my blood!

Yes I have booked my flight and will be coming up! I am looking forward to it. I think if we could get a point then we would be very happy and so I am going for 1-1!

* Jim White on himself:

Still need to lose a few pounds and have more grey hair! The site is doing well thanks and we are always looking for new ways to improve it! The Swans Trust name (I am Vice Chair) and its reputation are also growing and we are trying to help Supporters Direct show other clubs that fan ownership of clubs can work! There is a long way to go but we have done it the sensible way and I think we should be an example to other clubs that you can reach the PL without having to put the future of your whole club at risk!

Next Post
Everton: what’s this about a bogey team?