Three games – Swansea at home, Wigan and Reading away, and not a single reader came up with a correct scoreline prediction. See if you can do better with Arsenal at home. Snowed off is not an acceptable entry …

Let us not be intimidated by a couple of good international performances by a couple of the best English players around. Make no mistake: Arsène, Arsenal and every Gooner will be be quaking in their boots at the prospect of a cold Saturday afternoon up against the slick goal machine that is Steven Fletcher, ably supplied from midfield, both wings and all four stands.

We’ve had the Arsenal “Who are You?” – see what Sam Limbert made of our questions at this link: https://safc.blog/2013/02/safc-v-arsenal-who-are-you-on-girouds-dive-on-real-fans-footballs-gentrification/

The impossibly young-looking Sam is in his final year at uni and working on a dissertation comparing football passion and religious. I liked his description – from his “Who are You?”, not the dissertation though I bet it gets a mention there, too – of the empathy between club and community in Sunderland: 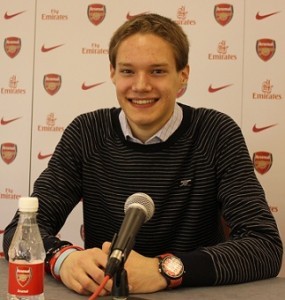 I’ve been on one visit to the Stadium of Light. It was the last match of the season in 2008 and it was a fairly uneventful 1-0 to the Arsenal. Even though it was slightly colder than I expected given it was May, you felt as if you were in a football town. There were red and white flags and scarves on buildings, outside pubs and hanging out of windows. Everyone there takes pride in their team, giving more of a community feel to the club. I love Arsenal being based in London and there is a community around the stadium, however very quickly fans disappear from around the ground to wider locations, however there was a feeling in Sunderland that the football team is woven into the fabric of people who live there.

Sam, at a guess like most people in football, is going for an Arsenal win. This, after all, is one of those clubs whose fans have an expectation of victory at every game. That doesn’t make them necessarily bad people, just different.

And in our usual spirit of friendship, Guess the Score is open to both sets of fans and, indeed, to neutrals. The prize for being first to post the correct score below is a Martin O’Neill “Team of All Talents – work in progress” mug. It coems for once without the buy one/win one condition and will be sent with an amended design if an Arsenal supporter happens to win.

If Arsenal will be clear favourites, the evidence of the past is that a Sunderland capable of raising their game can make home advantage and, maybe, greater passion count. Take the evidence of Nov 2009. A casual Google search took me back to this report from that fountain of wisdom and truth, The Sun:

What is painfully obvious is that Arsenal cannot win a game when they play badly. Manchester United and Chelsea can. They grind out results against the run of play.

Take United. They were outplayed by Sunderland at Old Trafford, yet still equalised in the last minute.
Arsenal, by contrast, were not outplayed by Sunderland. But they certainly did not batter Steve Bruce’s men into submission. This was the first time they have failed to score all season. Why? Despite dominating possession, they did nothing with it.

There’s no Darren Bent to force home the winner any more. But Fletcher has proved he can score provided he gets the service. Wenger knows that and will do his utmost to crowd him out of the game or starve him of supply. Enter Danny Graham; a home debut goal would have the pantomime boo boys – who, in fairness, were jeering a Mag-supporting opponent – singing his name in admiration.

You don’t have to wait to win Guess the Score: click here for the Martin O’Neill ‘Team of all Talents’ mug: £9.50, post-free for UK buyers, from the Salut! Sunderland Shop

12 thoughts on “SAFC v Arsenal: no need to fear Wilshere or Walcott, then. Guess the Score”

Next Post
SAFC v Arsenal ‘Who are You?’: on Giroud’s dive, real fans, football’s gentrification