Con Kondonis* is an Aussie, resident in the UK for 10 years or so, and an adopted but keen supporter of Fulham, our opponents at the Stadium of Light on Saturday. He has little time for cricket, loved Fulham’s European adventures, urges players to stop behaving like a bunch of softies, misses Danny Murphy, couldn’t give a hoot about Fayed’s Michael Jackson statue at Craven Cottage and would like to see sushi and wine replace meat pies and sausage rolls in football catering …

Salut! Sunderland: As the time of posing these questions, we are 12th and 13th in the Premier, you ahead of us on goals scored in an otherwise identical record (it changed with Fulham winning and Sunderland losing. Is that good, acceptable or disappointing for you?

Personally the season is a little disappointing mainly due to the lack of improvement. I think the team was playing better football ( as much as it pains me to say it) under Hughes especially the 2nd half of the year.

Is Martin Jol the man to lead you forward and what are the limitations on how far forward anyone can realistically take a club like yours?

I think he was looking for a cushy job at a club that doesn’t have that much ambition or expectation for that matter. I can’t see how he has improved the side. We were lucky to have won some games early but now struggling at home to teams like Wigan, Southampton and even Sunderland.


As an Australian/ settled in London, you could have chosen to support much more successful teams. Why Fulham – what is the history of the allegiance?

Having followed the English soccer since I was a kid, always preferred to Rugby League played in Sydney, I happened to go to a Fulham match when they played at Loftus Rd. Enjoyed the friendly family atmosphere that Fulham provides. My son was about 12 at the time so I thought it would be a safe environment to take him to Fulham matches, so we became season ticket holders. He is now at university in Exeter so it’s just down to me going alone.

Awesome especially the final in Hamburg. Having qualified for Europe I said to my son that this is the year we are going to get relegated, knowing we didn’t have a huge squad. However I did promise him the if we get to the final (thinking this is a safe bet), I would take him. The rest is history!

Have there been other highs and lows during your time supporting them?

I will start with the lows and they were probably the Sanchez era, although the positives that came out of that was the signing of Danny Murphy. If you look back at our success during the Europa League, it was him that held the side together and was the backbone of the side. That’s who we miss most. Highlight: Juventus at home, Oh what a night … simple!

And what do you make of Mohamed Fayed, Michael Jackson statue and all?

I don’t have a problem with Al Fayed. The long die hard supporters love him. So he has brought some good to the club. As for MJ, who cares? Was never a fan. I think Al Fayed met him and had the statue made for Harrods. He sold Harrods so stuck it at the Cottage. 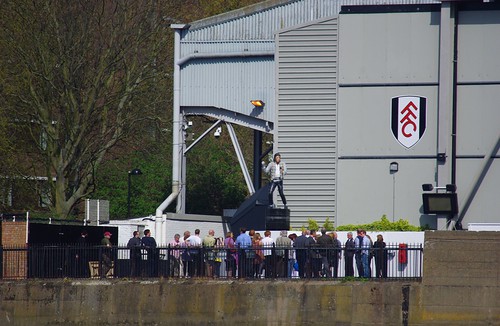 There have been lots of links between our clubs – Malbranque, Melville, Lee Clark, Kevin Ball, Kieran Richardson, Dickosn Etuhu, Paul Bracewell. Thoughts on any of them?

Malbranque great on the ball and dribbling but for me no end product. Dixon had a problem of predicting the bounce of the ball the other I don’t know much about.

What did you make of Sunderland at the rather strange first game that we won 3-1?

If we had kept our 11 it could have been a draw, I suppose.

Would you welcome any member of Sunderland’s squad in Fulham’s team?

Who will finish top four this season and in what order? Who is going down and where will our two clubs end up?

Manchester U in 1st , Manchester C in 2nd, Chelsea 3rd , Arsenal 4th . Going down. QPR, Villa and possibly Wigan. Our two clubs about 11th and 12th.

Has cheating become so commonplace that we may as well accept it as part of the modern game? If not, which form most annoys you and what should be done to stamp it out?

Probably asking the wrong person here. As an Aussie we believe and a taught from an early in fair play. We see it in League where guys get smashed and he gets up and plays the ball not showing any signs of being hurt, as this is not man enough! Football/Soccer is the complete opposite one slight touch and they roll around as if they are going to die. There is no pride! Maybe it is just a European way that has evolved over many years. Not so evident in England but mainly on the continent.

What matters most to you, Aussie successes at international level in cricket, rugby and, less so obvioiusly, football or Fulham FC?

I am not a real cricket fan but because its in my face here in the UK I am always reminded when England do well. Rugby I suppose, only at international level as the club game is not a big thing at home. Rugby League is bigger and a better game. Definitely follow the Socceroos but yeah, more into Fulham!

What single step should Fulham or the football authorities take to improve the lot of ordinary fans?

Facilities are absolutely ancient barring the Emirates and Wembley. For an international competition that the Premiership is and remember this is an international competition now played in England. If it wasn’t Sky would not put money into it, the facilities are appalling. Coupled with morons that serve in the shops it’s like a blast from the past. They still believe in sausage rolls and meat pies, who eats that s***? Move along freshly made sandwiches with Sushi and wine.

Unfortunately there is a thing called work so I won’t be there. But due to modern technological changes, where there is will there are ways of watching the game live. (In later conversation, he took a punt on 1-1)

* Con Kondonis on himself:
I go to all the home matches and enjoy watching Fulham. My business is in web designing and development. I help many small business get a presence on line if you want have a look at what I do check out http://www.seo-web-designs.com

9 thoughts on “SAFC v Fulham ‘Who are You?’: forget prawn sandwiches, give us sushi and wine”