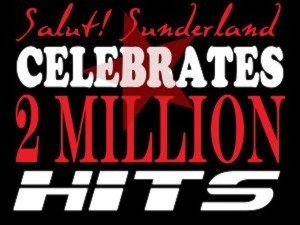 The milestone has been and gone. But you have a last chance this weekend to try for a prize in the grand Two Million hits competition … the deadline in midnight (UK time) tomorrow, June 30 …

Salut! Sunderland invited readers to post short, sharp verdicts on the season just gone. But it was not meant as a strict limitation on subject matter so no one will be disqualified because they looked forward or further back than one season. Also, as previously stated, you may try as many entries as you wish while confining each one to a single thought.

I am happy with the standard of entries but would be delighted to see even more before I decide who has won the £200 holiday voucher from Hays Travel and the quality clobber from Philosophy Football. Since no one who helps out around here gets paid, contributors are welcome to enter the competition (and some already have).

Now that the end is in sight, I will relax the previous requirement that all entries should be posted at https://safc.blog/2013/06/salut-sunderlands-two-million-hit-party-even-newcastle-are-invited/. That remains the logical place for them but entries posted as comments to this article will also be valid.

This was how I described what I was looking for:

And here is a glance at the offerings so far:

* The last 40 years as a Sunderland fan: Sh*t Sandwich.

* There are seasons when I’m glad I live 170 miles away. This is one of them.

* Can someone work out Lee Cattermole’s hourly pay rate as a player and give it to me?

* Never have so few owed so much to so many.

* I’ve heard of “total football” but what they served up this season wasn’t even “partial football”!

* Be careful what you wish for,e.g O’Neill

* I’ve always named my pets after Sunderland players, I’ve a tortoise called Danny Graham’ (pinched from the message board)

* It’s not fair. We keep getting bullied by this big lad. SAFC defenders v Lukaku.

* Could be worse. At least I’m not a mag

* A draw at WHU then a win at MKDs then it all went wrong.

* or Now this is not the end. It is not even the beginning of the end. But it is, perhaps, the end of the beginning…I wish SAFC would make their bloody minds up!

* “I’ve often said there’s nothing better for the inside of a man than the outside of a horse.” (Ronald Reagan)

* Ever present frustration, ultimate despair, but always the hope and occasional hallelujah moment. I love this club and, more importantly, its supporters.

* The Newcastle French Revolution.Well, a lot of people certainly did lose their heads.

* Martin O’Neill was sacked because of a combination of illness and fatigue. The fans were sick and tired of him. [Apologies to John Ralston ]

* Ben Arfa? At present he’s not even Ben Quarta

* About time premier managers grew some balls and stop handling players with kid gloves, PDC and his methods should be applauded

* Is it possible to have negative cup campaigns ?

* Highlight of the season had to be the win at St James’ Park…lowpoints…too many to mention, the defeat to Bolton in the cup (I live near too many Reebokkers), the six-one at Villa Park, the failure to neat 10-man Norwich at the SoL…

* A sleepng giant? Newcastle United make Rip van Winkle look like a mere catnapper. ( from the Guardian a few years ago )

* Last season has gone. Look forward with optimism and hope.

* Vaughan goes for the strike…

* Just want all you Make & Take…ems (I think thats right in’it) to know that I fully intend to finish the job I started back in 2008!

* (Mag entry): Well well looks like another exciting season ahead for both cubs. You’ve got a raving lunatic as manager and we’ve got a blithering idiot as football director. I’m afraid both clubs are become jokes in the football world.

* If we open a quarrel between past and present, we shall find that we have lost the future.

If you think you can do better, go ahead in the time that remains …

6 thoughts on “Salut! Sunderland gets ready to sort the winners from the losers”

Next Post
Is lack of inspiring transfer activity a real concern?