Monsieur Salut and Pete Sixsmith are like two squabbling old codgers. Sixer gets to write about non-league football and rugby league but complains at any mention of rugby union, demanding equal space for the Pia Donkeys. M Salut rambles on about women’s football. This is the last of a trilogy* on the female game. And the Donkeys? Emphatic winners of the French rugby league premiership, the club is based in the Pyrénées (and is properly known as Salanque Méditerranée Pia XIII). The league also boasts teams named after bisons, wild boar and grizzly bears – Sixer will at least agree Donkeys would have fit our own lot, Sunderland AFC, quite well in the season just gone). Now back to the girls …

Five smiling young women, a line-up of all the scorers from a friendly on the Riviera between Sporting Toulon Var and Old Actonians, a west London side featuring M Salut’s younger daughter Nathalie.

Alas – or even aLass – Jennie Willard is the only Englishwoman among those who found the net.

There were six goals in all and Jennie, who is in the process of making an unusual career change from childcare to managing a coffee shop, scored only once. That will give you an idea of the result.

It was not quite as heavy a deficit as Jonny Wilkinson and his Toulon team-mates suffered in the French rugby final at the Stade de France (19-14 to Castres), but we know enough about the oval ball game to realise that doesn’t make losing 5-1 in football seem better.

At half time, it had looked highly respectable. Acton were just one goal down and trailed only because Jennie had managed an extraordinary miss at 0-0 when she found herself with the ball in front of an open, empty net after a collision between the Toulon keeper and a defender. Not even Danny Graham would have dragged the ball wide; Jennie did.

So her well-taken late consolation goal was probably all that stood between her and having to buy every round on the night out that lay ahead.

Even Toulon’s opening goal had come only because an utterly cruel bounce on the synthetic pitch took the ball away from a defender and put it at Lynda’s feet. Her finish was clinical.

The second half was a walkover. Acton had a couple of chances, forced one excellent save and were perhaps unaccustomed to the strong south of France heat. But Toulon were fitter and slicker and the four-goal margin was only slightly unkind to the visitors.

“We lost movement in the second half,” said the one male in the English touring party, Phil the coach. “But
our season ended six weeks ago so it still wasn’t a bad effort.”

The English girls kindly clubbed together to buy a bottle of wine and a cake for M and Mme Salut in honour of all they – and especially Mme Salut – did to make the visit happen and run smoothly (we shall draw a veil over .
the noisy 5am return from clubbing by three or four of the team that disturbed sensitive, previously slumbering hotel guests and probably set back the entente cordiale 100 years).

Neither team had fielded a full first team. Acton’s side was a mix of first and second regulars, Toulon played their second string as the first team had a play off the next day – which they won toe secure promotion. But I remember being told when I first visited the Bon Rencontre stadium, Toulon’s main football ground, where women’s games are played on the training pitch across the road, that there wasn’t a huge difference between them.

* Sunderland to shake the Super League: hail our conquering heroines 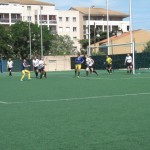