Pete Sixsmith captured it in his seven-word verdict: ‘Oh Vito Mannone. Oh Vito Mannoe. Hero.’ Now it’s Gus Poyet‘s turn and he rightly hails a wonderful night, a tremendous team effort (from the keeper’s pentalty shotoout saves to the glorious 9,000-strong away support) and a result that brings sunshine shining on a season that looked so gloomy …

It’s difficult to understand what happened in the game but it’s a great feeling.

We worked hard, it was incredible, it was unexpected but it was a great night of football – a great, great cup game.

I think the idea was just to try and realise what we had done, we were on penalties after two legs and extra-time against Manchester United away from home and that was already a big achievement – now we needed to go for a step further.

I was quite confident with the penalty takers, but it didn’t work out, so then it had to be Vito [Mannone] having an exceptional night – afterwards even the players were singing his name, which is a great feeling for him.

Everything we’ve tried to convince the players of, everything we believe in, they wanted to do it.

When the players went over to the fans at the end – if you asked the players if they wanted to stay there, they would say to you, ‘Yes,’ because it was an incredible atmosphere.

Vito was the man, I said to the players that I believed in him and that he is going to save one, so make sure you score yours – I didn’t expect him to save so many.

Firstly, thank you to the fans, because they were outstanding, secondly I’m very pleased that they can go home feeling very proud of the club and of the players – I hope we can have a similar day at Wembley.

Let’s make sure we get plenty of points in the Barclays Premier League between now and then so we can enjoy the day. 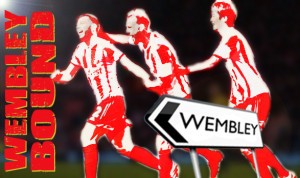