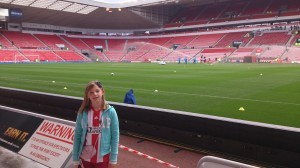 We must all be having our different ways of trying not to think too hard about tonight. A friendly Hammers voice on Twitter – @whustuff – offered a deal: they win, we still stay up. I declined on the grounds that we probably couldn’t do the last but without the first.

Instead, I called up this lovely account of a typical day spent at the Stadium of Light by 10-year-old Hayley Penman, a Scots lass I occasionally see with her dad in the East Stand concourse. I also sat with her dad at Wembley – Hayley settled for the promise of a ticket for One Direction, though I am not sure which Scottish league they play in. Ah for the innocence of youth …

My day at Sunderland

I wake up early in the morning, very tired. I have my breakfast and get ready to go.

First we drop off Kirstin at my gran’s.

My dad always gets me sweets to eat during the game if I am a good girl (how can you stay good watching that? – ed).

Then we drop of the car and take the bus to the station. On the train, we sometimes we see a Sunderland fan – for some reason he never looks very happy. I sit down and play my Nintendo DS.

Eventually, we reach Newcastle and change to the Metro.

Dad on daughter (1):
Hayley is becoming a very astute observer of our games. During our game against Southampton, after watching them string about a dozen passes together with little effort and us chasing shadows, she turned to me and asked, ‘ have they got more players than us?’

In Newcastle there are very fat men. And the ladies don’t seem to wear a lot of clothes!! My dad says it’s not that bad a thing (tell him he has to double your pocket money or you’ll tell – ed).

The other thing about the fat, ugly men in Newcastle is that they can’t sing. Their voices are terrible, even worse than mine! Though the Metros are very wobbly so maybe that explains why.

I reach the Stadium of Light and my dad buys me a Black Cats book that I find very interesting. I go into the ground and watch the warm-up. I’m sure Giaccherini is the same size as me!! Back down in the concourse, I meet Pete (Sixer) as well as as Doug (Forrest), Joan (Dawson) and sometimes Monsieur Salut himself.

Dad on daughter (2), while watching MUFC vs SAFC:

Hayley once again provided me with another of her now famous remarks. She has never rated De Gea. Every time she sees him play she dismisses him but last night every so often she would say ‘De Gea is rubbish , why are we not having shots at him?’. Well as the ball squirmed through the Spaniard’s hands in the 119th minute with our first shot on target and in between the squeals of delight as she leapt about the room she said ‘ I told you, I told you’.

Later, I reach my seat and the first thing I do is ask for those sweets (knowing you can’t stay good when watching what’s about to happen most games – ed).

I think Sunderland will be staying up in the Premier (hallelulah -ed). Crystal Palace are a very dirty team and the game that Saturday was a disappointing result. We have to score and the scoreline said Sun-Cry on TV!!

The game finishes and my little sis Kirstin phones me to get the result and I ask what she is doing. Then I text her and she said “having a cup of tea in Tesco”. Back in Newcastle, we get on our train and I look at my Black Cats book until we reach Edinburgh.

Tram trackway is all over the place. The trams probably have more money than Sunderland do!!

I take the car home and have my dinner and after that I look for my bun then it’s bedtime. But I do watch Match of the Day.

Dad on daughter (3):
Her passion for the team is unwavering though. Her bedtime reading has moved from the One Direction annual 2014 to the 100 greatest players to play for Sunderland !

1 thought on “Hayley Mulls: forget One Direction, give me my new Sunderland book”

Next Post
Sixers Says: Allardyce’s Hammers need to be nailed