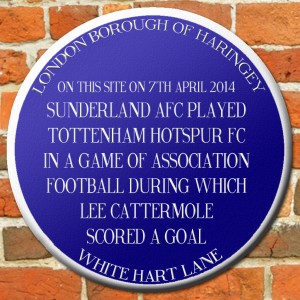 Keir Bradwell’s Easter homework could get in the way of his ratings out of 10. Expect a few minuses once he is able to oblige.

And Sixer – just imagine what his journey back north from London N17 must have been like, too late even for fish and chips at Wetherby unless they stay open a lot longer than seems possible – had already warned us he would be unable to rush into prose, declaring several days ago: “Report on Spurs will not be done until Tuesday evening – if I want to write about a dismal defeat.”

So we are left in the good hands of our illustrator-in-chief Jake.

“When Cattermole scored I intended doing a lighthearted blue plaque to commemorate that, but after that second half capitulation I don’t think anybody’s in the mood for lightheartedness….,” he wrote.

But I was intrigued so encouraged him. Hence the first of his images (above).

And then this is his second … 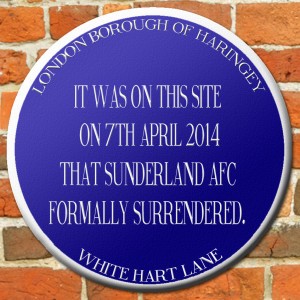 Next Post
Poyet: no poyetry, no motion, not even many words after Tottenham debacle