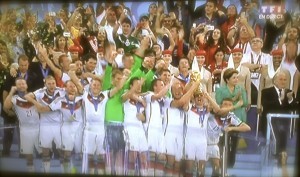 It took a slice of true footballing genius to win it for Germany. But, anxious moments for Neuer aside, was there ever any serious doubt? …

It finally became clear to me that Germany would win the 2014 World Cup on 60 minutes when the best goalkeeper of the tournament, Manuel Neuer, had his Harald Schumacher moment.

Until then, it had been a game dominated on possession by Germany but with Argentina mostly looking likelier to score. Pete Sixmsith considered that even our Jozy would have buried the chance that fell to Gonzalo Higuain, thanks to Toni Kroos thinking he was David Luiz for a second and heading vaguely towards Neuer but putting the forward clear on goal. He screwed it wide.

Higuain later celebrated for what seemed like five minutes after beating Neuer to slot home a low cross, inconveniently one of two Argentine players caught offside.

That wasn’t Neuer’s Schumacher moment either.

It came when the German raced against Higuain to be the first to a ball on the edge of the area. Neuer flew through the air, clattered into Higuain as if he were an advancing Frenchman called Patrick Battiston and punched the ball clear. Was it a penalty? Or did he punch it from outside the area, ie a free kick and red card? Double let-off; the otherwise outstanding Italian ref Nicola Rizzoli gave a free kick but, wait for it, to Germany. 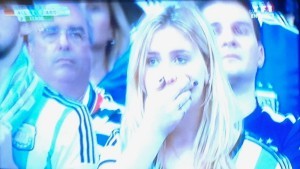 I had no idea how the victory would come. The excitement continued to occur mostly in Neuer’s area, after smart Argentine breakaways. Germany, save for that header by Howedes against the post at the end of the first half, had still failed to seem that menacing. The most efficient, disciplined team of Brazil 2014 even started misplacing passes. someone on Facebook, thought it a “great final” and – when I questioned this – retorted: “Pretty absorbing for a final.”

But I knew it would. Extra time, penalties, Lineker’s law somehow prevailing if even those means to triumph failed to hand the Jules Rimet trophy to Die Mannschaft. Why, the last phase of the Salut! Sunderland World Cup poll had them on 72 per cent of the vote.

And when it came, it was not from a fluke, nor from a rotten decision, nor even from the lottery of penalties, but from apiece of magic. Mario Götze’s control, on his chest, of a wonderful cross from Andre Schurrle was exquisite; the finish he then produced was, as Arsene Wenger put it on French TV (TF1), magnifique. The second period of extra time had barely begun, but it was all over.

Brazil 2014 had it worthy winners, the team that had impressed most and most often.