From our Own Correspondent, as the BBC might say. Richy Duggan, Salut! Sunderland’s man on the Algarve continues his diary of an enviable little break following the Lads – and the Boys, it seems – on pre-season duty. Mika’s tweet (see below) summed up his own feelings; the picture accompanying this introduction shows him in fan-friendly mode …

Walking through the town on the eve of Sunderland’s first match at Albufeira you could find Sunderland shirts all over, packing out the city bars where the wearers enjoyed the local favourite “Super Bock”. After one or two of these were sunk in true Mackem fashion, the lads headed up to the Estadia Muncipal stadium.

As we turned up the ground was starting to get a sense of buzz about it. There were many flags of people from all over the country and even Feyenoord fans here supporting the lads. One flag was so big the lads were climbing the white poles in the ground to pin it up to the amusement of many at the ground.

Before the game many noticed the first-team regulars were sitting in the stand. This started some of the fans to sing some new songs about the lads….”Hey Giaccherini…” going through the full team. The champagne was on Connor Wickham, there was orange everywhere and Jordi proved he was a Mackem!…….and if Altidore scored you know we were on the pitch!

The game kicked off with the young guns who destroyed Hartlepool and Carlisle all in the starting line up. Both teams looked nervy in the first half with chances very limited. The best of them came to Martin Smith [crikey, he must be in his 40s! – Ed] who rattled the cross bar with a curling freekick and young David Ferguson followed up with a left footed strike to see the ball inches wide of the Recreativo goal.

Recreativo nearly found the net in the second half when they beat the offside trap on a clever worked free kick only to hit the Demba Ba too.

A second half substitute saw the introduction of Greek winger Mavrias who went on a mazy run into the box and was fouled. Big Mika (Mandron) picked the ball up to smash it in for his second goal in three games for the Black Cats. There was little chance to reply for Recreativo as the Lads killed off the game with just 12 minutes remaining. 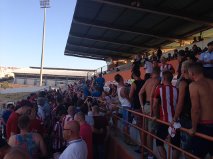 A good solid performance from the young Cats against a well disciplined, very technical Recreativo will have given Gus and his staff food for thought as they once again proved one or two could be ready to make a senior impact this season.

George Honeyman was pulling the strings, Watmore was like a whippet up and down all night and Mika was solid in leading the line and when it most counted he did not let the Lads down. The matchwinner even stopped for pictures and signed autographs for fans who waited after the game.

As the sun went down over Albufeira it will have left many Sunderland fans happy to hit the town with smiles over their faces.

We have seen Sunderland win in Europe….hopefully Gus can turn that into the “Real Deal” sometime soon.

Last season’s cup runs and Great Escape gave us the biggest roller coaster the club has seen since the 1973 cup campaign. Will this season bring another roller coaster? The unbeaten pre-season and new additions has give us good reason to hope. So for now, sit back in the sun, have a Super Bock or two and roll on Sunderland’s next game: CD National. #AwayTheLads

Delighted to add another goal to my name! Hopefully many more to come.. So blessed ??????