Who are You? – interviews with fans of teams SAFC are about to play – is a feature of which Salut! Sunderland is quite proud, even if it sometimes seems a thankless task. What you are about to read makes the whole thing feel worthwhile …

Raich Carter, son of the man who played 278 times for Sunderland and nowhere often enough for England (13 caps) despite being one of his generation’s finest footballers, was a popular choice as the winner of Salut! Sunderland’s annual “Who are You?” awards. He’s a Hull City fan – dad was their player-manager from 19478-1951 and made a huge impact on Humberside – with a massive soft spot for Wearside.

The prize for contributing what our judges found to be the best interview with any opposing fan last season was $200 worth of gear from our brilliant year-after-year sponsors http://soccerpro.com

Raich junior decided he had pretty much all the football clothing and memorabilia he’d ever wish to possess. But wouldn’t it be great, he said, if some children’s football team in Sunderland, and best of all Hendon where his dad was born, could have his award.

Raich, reached by phone today, is chuffed. “My dad was born in Hendon, in the Ocean Queen pub – long since demolished – on or close to the site of where they built the Raich Carter sport centre,” he said. “My grandparents had the pub after injury ended my granddad’s career [Robert Carter had played for Port Vale, Fulham and Southampton – Ed].

“I am absolutely delighted if my prize is going to help, in however small a way, lads in Hendon.”

And so is Richy Duggan, project manager at HYPP.

His initial response set the tone: “Cllr Michael Mordey has put me touch with you regarding some funding that might be available for our junior football team. The team is made up with local lads playing in the Russell and foster Youth league. The team is called ‘Wearside HYPP Football club’ … this [is] very positive for young men in Hendon especially with the Raich Carter link.”

Richy opted for training equipment: the wonderfully named KwikGoal Infinity Squared Popup Goal 4 Foot (two of them of course). You see it below. 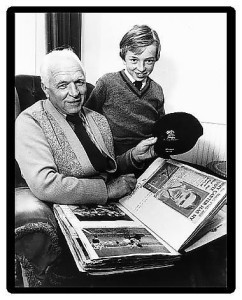 And today, the order was placed with soccerpro.com (who promise – maybe Rory Delap style if it’s all the way from the States – throw in a ball).

“Thanks again from everyone here,” says Richy. “You’re a star.”

No Richy, the stars are Raich, father and son.