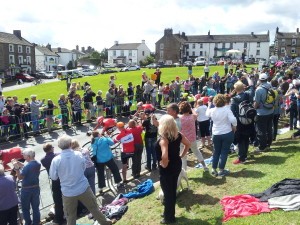 Along with Kate and Wills and Harry and Dave, though in rugged Reeth rather than posh Harrogate, Pete Sixsmith took part in the great British love-in with the Tour de France’s Grand Depart in Yorkshire. Here’s an account of his day …

The younger brother (a mere stripling of 60) is a keen cyclist. The youngest one has been known to get on one and pedal. Sixsmith Major has a shocking confession to make: I cannot ride a bike and have never really had the inclination to do so, ever since I fell off Dennis Robinson’s green Raleigh and took the skin off my elbows and knees in the gravel pit that was known as Drybourne Park.

Sixsmith Minor spends much of his time cycling the highways and by-ways of Macedonia (Greek version) and winning races and titles. His enthusiasm for the sport goes back many years and I enjoyed a reunion with him and former members of the Crescent Road Club when he was over in November as they yarned about cafes, Sturmey Archer gears and how they fell into and out of hedges around South Durham and North Yorkshire.

So, when God’s Own County was awarded the Grand Depart for 2014, I was determined to see it. And see it I did from one of Monsieur Salut’s favourite places, the splendid Swaledale village of Reeth, home to three fine pubs, a bakery that is revered and a pattern of dry stone walls that are the envy of the rest of Yorkshire and, by default, the rest of the world. 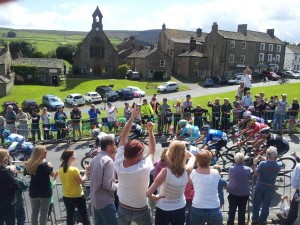 Like all good things it was important to be there early, a fact which put off one good friend who fancied the ambience of the day but not leaving Sixsmith Towers at 6.15am. By 7am I had the day’s first big decision to make – Leyburn, where there was a fan hub, or Reeth, where there was no big screen but there were the aforementioned dry stone walls.

I took the grittier option because, as that fateful tumble many years ago showed, I am a gritty kind of guy.

True to form it rained all the way there and was still raining as a Yorkshire farmer relieved me of a tenner to park in his field at Grinton, a mile or so from Reeth. As I walked along to the heart of Swaledale, hundreds of people were going the other way, walking up to Grinton Moor to see the cyclists tackle the third climb of the day. I took one look at the long slog up the road that separates Swaledale from its gentler neighbour of Wensleydale and made for Reeth and bacon sandwiches.

And bacon sandwiches there were a plenty as I hit the town at 9am. The sizzling of the rashers and the smell of frying pig assaulted the senses as the village green was perambulated and the Methodist Chapel was chosen as the port of call principally because I could have a sit down and a read of the paper. Which I did.

By the time the inner man was satisfied, there was a three-hour wait before the caravan arrived and five hours before we got a glimpse of the peloton whizzing past. In the meantime, the cyclists of Britain were arriving and departing, some having ridden parts of the course, others having risked life and limb riding their bikes along the narrow roads, weaving in and out of cars and camper vans to reach what was, for them, the Holy Grail – the Tour de France in Yorkshire.

By 11am I had found a good viewing spot, slightly down wind of the accordionist who regaled us with his medley of well-known popular songs. The first Ilkley Moor Bah’t Tat opened his set and was to be repeated three more times before he finally stopped just before the race arrived.

The village green filled up slowly at first and then more rapidly and soon there was enough Lycra in Reeth to cover the entire Swaledale fells – or so it seemed. It was matched in quantity by the number of dogs brought along by their spectating owners. To Johnny Foreigner, it must have looked as if Britain was inhabited by a dog-owning, bike-riding, Lycra-clad sub-tribe who emerged from their lairs for occasions such as these.

By 10am the safety stewards had arrived to join the green clad Tour Makers, one of who attached himself to me for a half-hour monologue which I thought would never end. The safety men and women had been bussed in from London and the two I spoke to had never been outside the M25 before. They were astounded at the scenery and the beauty of L’Angleterre Profonde and seemed more interested in the dry stone walls and stone built houses than crowd safety.

There will be much talk of Reeth, Fremington and Grinton in Brixton, Shoreditch and Lambeth in the coming weeks.

My neighbours on the area in front of Reeth’s understated war memorial were Felix, Finley and Harvey, two brothers and a cousin, whose dads kept sloping off to find a “good place to take pictures” but who came back with a whiff of curry and Yorkshire ale about them.

The three lads were good ones, but whatever happened to proper names like Peter and Colin and Malcolm? You rarely come across those when going through a register nowadays; plenty of Coles and Joshuas and Harrisons.

Maybe by the time they have their offspring good, solid post-war names will be back in fashion again.
And then, the procession began.

British motorcycle cops waving at the crowds and letting their sirens off, interspersed by stony faced gendarmes who sped through on their blue bikes. Lots of Skodas carrying officials and timekeepers and team members and then the caravan arrived in Reeth.

If cycling is something you want to take up, read this to stay safe. Although a lot of times, it can be quite fun but there can be times where it can become quite serious.

The merchandise vans blared out that peculiar brand of music known as Europop, so beloved by the southern Europeans, who are far too busy idling around on the beach to concentrate on writing proper stuff. They sped through to be followed by vehicles disguised as bottles of fruit drinks, bottles of drinking yogurt and wrist watches.

Smiling girls distributed boxes of Yorkshire Tea (two pensioners were involved in a fight to the death for one of them; that’s what we have come to in Cameron’s Britain), packets of Mentos were flung at the multitude causing serious head wounds to those unfortunate to be hit by them and there was a collection of Welcome To Yorkshire convertibles driven by leggy blondes, the other front seat inhabited by great Yorkshiremen.

I saw lookalikes of Mr HD (“Dicky”) Bird, FS Truman and Brian Glover aka known as the wrestler Leon Arras, Mr Sugden from “Kes” and Mr Heslop from “Porridge”. I may have made up the last bit. 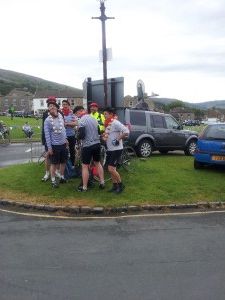 The arrival of the helicopters, hovering over the Swaledale fells like huge birds, told us that the cyclists were on their way. Jens Voigt shot past us four minutes ahead of the peloton and then, with a whizz and a whoosh, the other 190+ participants shot down the hill to the bend at the bottom. It was a blur of colour, similar to that that a fish may see as a kingfisher plucks it out of the water.

And that was it. Felix and Finley folded up their rugs, the lady in front of me untangled her bichon frise from the barriers and the man from Norwich who had abandoned his bored female companion so he could take photographs, (that one won’t last beyond the weekend) returned to a less than rapturous reception: “We’ve sat here for six hours for that?”

It didn’t sum up the mood of the crowd who had had a great day out eating bacon sandwiches, supping Landlord, Black Sheep and Copper Dragon ales and taking in the wonders of the greatest county on earth. It really was a day to remember – and it’s one I will never see again. 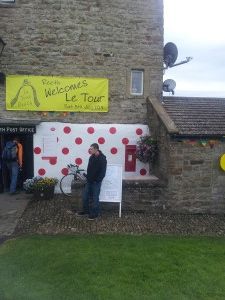 Next Post
Only four left: Argentine, Brazil, Germany and the Netherlands vie for votes