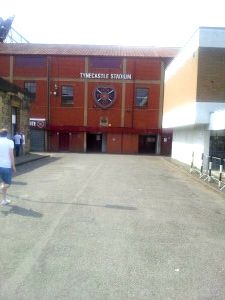 We have our spies, or at any rate a spy, in Portugal who promises faithfully to act as Salut! Sunderland‘s foreign correspondent. No spies in Lincolnshire, so far as we know, so we must just trust the reporters got it right and Danny Graham really did score. Pete Sixsmith had mates there who can fill us in on the detail if they wish. The man himself felt Tynecastle held more attraction than either, or was just an easier or better trip …

I decided to miss out on Portugal and also on the Development Squad’s visit to Boston; Boston, Lincs not Boston, Mass, from where Fabio Borini flew back to England, hopefully to pen some kind of deal with us.

Had I visited the home of the Boston Stump, the name given to the 272 feet high tower of St Botolph’s Church, I would have witnessed something that few red and whites would have seen – a Danny Graham goal. His leveller in the second half of a game played in searing heat gave the youngsters a 1-1- draw and it may well kick start Danny’s career on Wearside – or perhaps not.

While Keith Scott and Peter Hayes were witnessing this, I was revelling in the pleasures of a Scottish Professional Football League Petrofac Training Cup 1st Round game between Heart of Midlothian and Annan Athletic at Tynecastle Park, the Jambos’ first competitive game under their new owners.

As always, the trusty Senior Railcard got me there on an East Coast First Class Saver. East Coast are the state run railway company which the Coalition will not allow to bid for the franchise for the line when it comes up next year. Formed when the previous franchise holder, National Express, walked away after only two years, East Coast have run their routes well, hence the refusal to allow a nationalised company to compete with the likes of Virgin, First and Arriva.

A pleasant journey up, with the sun shining on Lindisfarne (the island, not the band) and the carriage being virtually deserted (no sign of Vic Reeves sketching fellow passengers) meant that I was ready for all that the Petrofac Cup could throw at me. Tynecastle beckoned.

But first, I took a ride on Edinburgh’s new trams.

If one wanted to see a prime contender for engineering shambles of the early 21st century, this would be a very serious candidate indeed.  It took seven years and over £1 billion to build a single line from the airport to the city centre. The original plan had it going through to Leith. It doesn’t.

They ran out of money and goodwill and ripped up the lines that had already been laid along Leith Walk, but not before a number of businesses had ceased to be. The good citizens of Edinburgh had to put up with years of disruption, but it finally opened in May of this year.

The trams were smooth, relatively inexpensive for travellers rather than council tax payers, but it all seemed a little pointless to me. All of the places accessed could be done by bus or train and I was hardly aware of anyone on the way out heading for the airport. They do look graceful as they swing through the city centre but the cost cannot be justified by the returns – a bit like Danny Graham.

After my tram ride, it was into HP Mathers Bar in Queensferry Street, my favourite Edinburgh watering hole. The management have cleaned it up and put a few more tables and chairs in, but it is still a pub for the drinking man and woman. The steak pies are to die for and the pint of Nightfall from Morecambe’s Cross Bay Brewery was up to the pie standard. 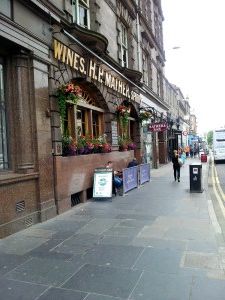 As good a way as any to spend an hour in Edinburgh.

A walk along Gorgie Road took me to Tynecastle, one of the most atmospheric grounds in what is still the UK. It was extensively rebuilt in the 1990s, having hardly changed since the main stand was put up in 1914. Manchester City had sent a strong team there the previous week to celebrate its centenary.

They were relegated from the SPL last season after having to start the campaign on -15 points as a result of what could be described as “financial problems”. The club is now owned by a newly set up company called Bidco, fronted by Ann Budge and they have pledged to pass the club on to the Foundation of Hearts, a supporter financed group, within five years.  We shall see.

The first meeting between these two clubs was a trifle one-sided. Hearts have a mixture of promising youngsters and have been given the go ahead to sign some more experienced players. The former Rangers and Cardiff City keeper Neil Alexander is probably the best known, while Osman Sow, a Senegalese born Swede, arrived from Crystal Palace.

He scored the second goal in the 20th minute, taking advantage of an excellent flick on from Dale Carrick and exploiting some poor defending from the visitors.  Billy King had put them ahead in the eight minute with a splendid curling shot from the edge of the box.

The game was all over in the 39th minute when Callum Paterson headed home from a King cross. The young full back looked a good ‘un but he was stretchered off on the stroke of half time.

Hearts played some decent stuff throughout and the 6,000 crowd (Annan brought about the same number of fans that Fulham usually bring to the Stadium) enjoyed the 90 minutes. Morgaro Gomis, a Senegalese journeyman who numbers Windsor and Eton, Lewes and Cowdenbeath among his previous clubs, struck me as the best player on the park. Malcolm Dawson would not have approved of him as he wore one pink and one blue boot. He would have liked Dale Carrick who wore two black ones as did Annan sub Steven Logan. Well done, boys.

They have lost Wonga as a kit sponsor and the maroon shirts are unsullied by any commercial name this season.  The shirts are reminiscent of the ones worn 100 years ago when 16 of the first team squad enlisted in Sir George McCrae’s Volunteer Battalion. Of the 16, seven were killed in action; their names are commemorated on a special war memorial at Haymarket and Hearts request not to play at home around the 11th of November.

A brisk walk back to the city centre followed by a look into the Café Royal for a pint of Inkie Pinkie from Inveralmond Brewery. The CR is a wonderful looking pub which features in Chariots of Fire and has some splendid Victorian tiled murals. How Hilda Ogden would have loved them. 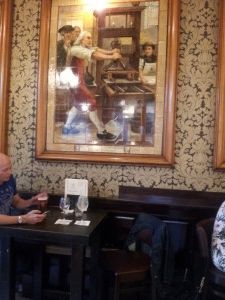 A quiet week football wise this week, but the internet will be scoured for news from Portugal and from Transfer Window House. Only three weeks to go now.

Next Post
Are we in the mix for the Money Football League?