It seems only five minutes, but is more than five months, since we were all putting a thumping at Arsenal behind us and watching a spirited first half at Wembley in which Fabio Borini scored one cracker, from Adam Johnson’s marvellous long ball, and ought to have had another. Citeh then produced two even better goals and, as we pressed for an equaliser, an entirely undeserved third on the break to kill us off.

Is St Andrew’s the start of another quest for glory? And if so, can it be achieved or at least competed for without the distraction of a desperate battle against relegation.

I can think of better places to start this season’s Capital One Cup campaign. Birmingham’s lamentable travails since relegation would have them gagging for a Premier League scalp even without the added spice of Lee Clark as manager to remind us all of another Wembley date and that SMB t-shirt.

Clark will doubtless get a barrage of boos from the travelling support. I fancy even Pete Sixsmith will allow himself a comment or two short on hero worship in the general direction of the Birmingham technical area. Like me, Sixer still respects what Clark did for Sunderland in the promotion season; his gesture at Wembley was either a piece of undisciplined idiocy or a symptom of his calculated resistance to playing for the club in the Premier and theoretically against his beloved Mags.

But who’ll be laughing at the end of the game? The match must produce a definitive result, according to league cup rules, so that means extra time and penalties if necessary.

For Guess the Score purposes, it is best to forget penalties and go for the score at the end of normal play whether that be after 90 minutes plus stoppage time or after extra time but before any shootout.

Since it’s the first cup game of the season, and in the competition that gave us a great day out in March, another Salut! Sunderland mug will be awarded to the winner. There’ll be a choice of design, which would be modified in any case in the event of a Birmingham fan being the first to predict the correct scoreline before kickoff. Monsieur Salut’s decision will be final.

Ha’way the Lads, whichever Lads Gus Poyet decides to try out for the match given the imminence of an important game in west London. 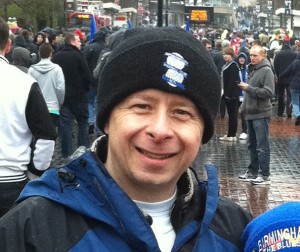 ** SEE ALSO: The Birmingham City ‘Who are You?’: with their Kevin Ball back in our hotseat

14 thoughts on “Birmingham vs SAFC ‘Guess the Score’: Lee Clark, SMB and another Wembley dream”

Next Post
Birmingham City vs SAFC ‘Who are You?’: return of their Kevin Ball