What better to accompany the tea or coffee, or stronger, in your rollover pair of prize mugs than a few tasty wafer-thin mint chocolates with cream inside?

The idea of asking Nestlé to stump up the modest price of a box of After Eights as part of this week’s prize was put in Salut! Sunderland‘s mind by Ian Wilkinson, a member of our Facebook group (join the 400+ members at https://www.facebook.com/groups/salutsunderland/).

Ian posted this image as his verdict on Southampton 8-0 Sunderland with Arsenal at home to come: 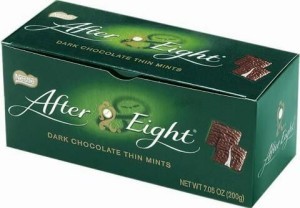 Sadly, the Men and Women in Suits who decide how to promote the food and beverages giant were having none of it.

An e-mail was ignored and a follow-up call proceeded as if the man on the other end of the line had no idea of the impact of one result – highlighted on the national news, interviews with forlorn fans (including our old friend Cass Farrar, who had been at West Ham and Watford, too) and finally the players’ offer to refund travelling fans the price of their tickets.

Monsieur Salut suggested that any public relations or promotions department worth its salt would jump at the chance of such a burst of very nearly free publicity. Finally, he wearied of these efforts to get him and Nestlé to enter into the spirit of the occasion, flatly pointing out that all sponsorship requests had to be made months in advance.

If only we could tell that far ahead that our team was going to be walloped to within a solitary After Eight’s width of its life.

See also: Shocked by such displays as Sunderland’s at Southampton but completely against the moneyback culture:
https://safc.blog/2014/10/gambles-rambles-yes-to-mannones-humilty-a-resounding-no-to-moneyback-culture/

But where corporate Britain (and Switzerland and the world) let us down, our own star writer Pete Sixsmith lifted us up. The sponsorship budget at Sixsmith Towers is smaller, or so we believe, but the great man instantly offered to buy the box of chocolates himself.

This, along with two slick Sunderland mugs from our much more fun regular sponsors Personalised Football gifts (or Arsenal ones if you support them and win), awaits this week’s winner. It is a rollover because, oddly, no one predicted 8-0 last week.

Guess the score for Saturday’s match. If you are right, first to be so and post your scoreline before kickoff, you win the lot. You must have a UK delivery address but there are otherwise no restrictions; even supporters of neither club may enter. M Salut’s decision is final.

* Check out the Personalised Football Gifts range at http://www.personalisedfootballgifts.co.uk/.

21 thoughts on “After Eight: a mint Sunderland vs Arsenal edition of Guess the Score”