Despite the air of resignation that has drifted into the tone of comments posted by Salut! Sunderland perceptive band of readers, the overwhelming majority of us fervently want one outcome to the season, safety for SAFC.

Actually, quite a few would quite like another outcome, too, the relegation of Newcastle United, but the 35 points Toon won before they decided winning and drawing are not really much fun will probably be enough assuming they don’t get hammered in each remaining game and pick up another point or two.

That leaves us to fight the battle alone. Without wishing to humour Smoggie unduly, I’d like to see all three major North Eastern clubs together in the Premier. I’d prefer those clubs to be Sunderland, Newcastle and Shildon but you cannot have everything – and at least Shildon have the consolation of remaining on course for the Northern League title (that would have my dad, the club secretary at Dean Street when that role mattered in amateur football, resting contentedly in his grave).

Back to the Premier. Saturday takes us to Stoke City, not an especially happy hunting ground in most recent visits, just one win and on draw in six. Mark Hughes has them playing solidly. We all know our own limitations.


But who can tell? The formbook says home win but even modestly talented footballers can sometimes raise their game, especially under a new manager, and if that happens Sunderland have a chance.

So to Guess the Score. I said earlier this week there would be no rollover despite the absence of a winner for the ruinous Palace result. There were two stabs at a 3-1 away win, both from non-Sunderland supporters.

But I wanted to keep a prize for the Denis Smith competition. Which competition, I hear you say?

I invited suggestions as to the identity our Stoke City “Who are You?” interviewee, a man with connections to both clubs. As the response indicated, without telling the full story, that left plenty of options.

You came up, between you, with Phil Bardsley, Alan Durban, Iain Munro, Danny Higginbotham, Loek Ursem (a real wild card: he played four on-loan games for us!), Liam Lawrence, Dean Whitehaed, Rory Delap, Graham Kavanagh, Kenwyne Jones. Someone cam up with Calvin Palmer but quickly realised he had died, just last year. No one plumped for Danny Collins or Thomas Sorensen and I may have overlooked others, too..

That leaves one name that was put forward, by our illustrator Jake, and he was right.

Our star interviewee is Denis Smith, lifelong Stoke City supporter, very nearly a Jimmy Armfield-style one-club player (407 league starts for Stoke, 37 for York at the back end of his playing career) but manager of Sunderland, a good one, from 1987 to 1991, winning promotion twice (including the runaway championship of the old Third Division after that humiliating relegation before his arrival).

Come back tomorrow for the full interview, arranged with the kind help of Stoke City Old Boys (@scoba on Twitter at https://twitter.com/SCOBA1863), the club’s former players’ association and especially John Ruggiero, its secretary.

It’s a good interview from which I have chosen this taster:


Salut! Sunderland: I believe you are Stoke born and bred. How much pleasure do you get from seeing them more than holding their own in the top flight and how big a regret is it that you never managed them? 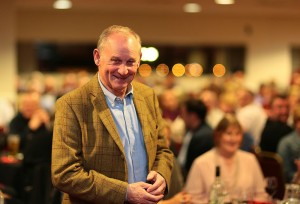 I am delighted having watch Stoke City from being a boy to see them in the position they are today. I was offered the job of managing them in the past but my wife Kate talked me out of it because it would have been too painful when I was inevitably sacked.

Jake was good enough to ask whether he was eligible to enter the competition. It is not as if anyone’s lining their pockets from keeping Salut! Sunderland afloat so the answer was a resounding Yes. And his answer was correct. He has our permission to use his prize, a mug from our competition sponsors Personalised Football Gifts, for tea, coffee, rioja or San Miguel, as taste dictates out there in his Spanish exile.

First though, he needs to supply a UK delivery address.

And get guessing on Saturday’s score. Stoke City supporters are very welcome to enter; such a winner would receive a mug with suitably amended design.

Next Post
Stoke City vs Sunderland: win a mug as the buildup starts here