As night follows day, the release of the new home kit for Sunderland AFC draws an exchange of early fire.

“I like it,” declares Andy Crake at Salut! Sunderland’s Facebook pages. “A modern twist [with] black meshing detail on the collar, sleeves and hem,” says the club. “Too much white, not enough red,” was Mick Goulding’s judgement at the Blackcats e-mail loop. 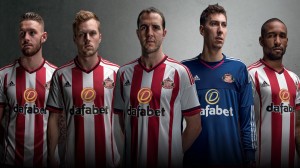 Monsieur Salut? I am instinctively with Andy. It’s smart and looks a lot better when you see an enlarged image of the upper half of the player wearing it. I can live with the logo, too; betting firms pay this part of the rent – they even pay a peppercorn rent here from time to time, which helps with the bills – and dafabet can hardly be expected to say “no, that’s fine, just leave us out of it”.

If I have a quarrel, it is as identified by Mick.

Last season, there were three broad red stripes with hints of two more either side as the player faced the camera (or crowd). Look at the photo of Seb and it has come down to two red stripes flanked by one vertical sliver apiece. Two just seems insufficient.

This quite significant design change may grow on me, and even on Mick and another doubter, Jeremy Robson, who writes:

I think it looks really smart; or at least it would do if it was for somebody else. It’s not a SAFC kit at all to my eye. There’s no need to mess about with kits at all in terms of their main make up; which is in our case the stripes. Put different trim on it and change the texture of the material, the style of neck and collar etc but ha’way man, you can’t mess with our stripes … our new kit does look more modern though. I’ll give them that

But while we may rue the days when we played in red and white stripes and that was an end to it, we may also misremember them.

I have seen photos of Ian Porterfield sporting three frontal stripes – as when he scored the 1973 FA Cup Final winner – but also two.

Since I was around in those days, that fact that I had to look it up may suggest these fashion choices matter rather less than the football we watch. And plus ça change, plus c’est la même chose, as one Jean-Baptiste Alphonse Karr wrote in 1849. The more things change, the more they stay the same.

So here is what safc.com has to say about the new home kit:

Sunderland AFC has unveiled its new home kit for the 2015-16 Barclays Premier League season, with the new-look strip set to go on sale across club stores on Thursday 18 June. As always, the shirt features Sunderland’s famous red and white stripes, but has been given a modern twist this season by sportswear giant adidas’ cutting edge design team. As one of the world’s leading sportswear manufacturers, adidas are renowned for their quality and innovation in kit design.

In a departure from recent kits, the 2015-16 shirt uses white as the base colour, making the traditional stripes stand out. Adding a modern twist to the garment, there is black meshing detail on the collar, sleeves and hem of the garment and this is complemented by the iconic three stripes of adidas, and finished neatly with red detailing.

Embedded with adidas climacool performance technology, providing a breathable kit on the pitch, the shirt bears the name of the club’s new principal partner Dafabet. This logo will not feature on junior shirts however, due to Premier League regulations.

The shorts are traditional black, set off by a red trim and adidas detailing and the socks are black with a red trim.

Fans can pre-order their shirts now, online at www.safcstore.com. The home kit will go on sale on June 18 and will be available online or in the club’s three retail stores located at the Stadium of Light, The Galleries in Washington or Debenhams in The Bridges, Sunderland.

Over to the Salut! Sunderland jury …