Lars Knutsen has had about as much ‘excitement’ as a Sunderland supporter can take. He wants the S word – stability – along with enhanced Premier status. Here, he looks back with some admiration on Roy Keane’s time at the club and ponders Dick Advocaat and succession. His choice for the Dutchman’s successor, assuming his stay is limited to one season, will divide fans …

Well we have had yet another “exciting” end to the campaign, and obviously all Sunderland fans are delighted that we stayed up, after what has become our usual late run.

Dick Advocaat did well for us, and won the hearts of the fans. Those tears at the Emirates told us that the club had got under his skin. With the right signings and his more attacking tactics we can do a lot better in 2015-16.

A valid question though is “are relegation battles true excitement or just ordeals laced with dread?”  It is that horrible sinking feeling of possibly losing our place in the Premier; since Newcastle bounced back in 2010, only three teams have gone down to the Championship and come straight up – West Ham, QPR, who did not last long, and now Norwich City.

It is a hard league to get out of, and Norwich did very well to get promoted via the play-offs last season.

Relegation for Sunderland could easily have ended with a stay of several seasons in a tough division where Blackburn Rovers, Derby, Leeds and Middlesbrough still languish.

So the coming season will be our ninth successive campaign in the Premier. I feel, like many fans, that we should be a more established EPL side, higher in the table with Everton, and more recently Southampton and Swansea as role models. Are we developing enough local talent, and signing the players who will develop with the team?
As an avid consumer of football autobiographies I have just re-read Roy Keane’s most recent effort, The Second Half. It is a compelling book, with many insights into an often fractious character, and although I would not call it literature, the tome co-written with Roddy Doyle provides a personal inside account of his time as Sunderland manager.
As a club, we owe a debt of gratitude to Keano, who as manager rebuilt the side and took us back up as Champions in 2006-7, restoring respect and passion after the chaotic 15-point Premier season the year before.  His achievement was all the more impressive given the five defeats at the start of that campaign during Niall Quinn’s brief interim tenure as manager.
My view of Keane is that he was an outstanding player and the driving force behind Manchester United in the time he was there, in the same way as Graeme Souness and later Steven Gerrard were at Liverpool. Keano has seemingly not yet been replaced at Old Trafford, and it seems clear that Liverpool will also struggle to replace their talismanic midfielder.
The point I want to make though is that top players rarely make great managers. My theory is that it is to do with perfectionism, but more of that in a moment.

Roy Keane was initially unsure whether to take on the Black Cats’ job, but in the end the Drumaville consortium from Ireland, with Niall Quinn fronting them, were persuasive enough. He came on board after those successive defeats in August 2006, and rapidly signed players who would get us out of that division.

He was the right man at the right time, bringing pride and professionalism to the Black Cats, consciously doing things to enhance the reputation of the club.

We were still 19th in the league in mid-October 2006, but this rookie manager inspired the team to new heights and we went on an unbeaten run from January 1st until mid-April 2007, which propelled us from 10th in the Championship to the top spoi by April 9th and we stayed there until the end of the season.

Keane referred to the Championship as one of the toughest leagues in the world, and notes: “I won it as a manager.”  He did very well for us but often admits to his inexperience as a rookie leader of our beloved football club, and owning up to some mistakes.

I noticed at the time that he had trouble with keeping a settled team. Injuries did play a part but if a player had a bad game, he would be dropped, almost vindictively. This is not something Keane admits to in print, but it happened, especially in defence. I believe like many others that a team has to have a settled back four and goalkeeper to be successful.
Why did Roy Keane not stay longer as Sunderland manager?

Well as it happens, his 100 games and two-and-a-half year stay makes him one of our longest serving managers of recent times; two more games than Steve Bruce. It has been a bit of a revolving door since Keano, and I believe everyone at the club wants stability at the top and the on-pitch success that can evolve from that.

Keane’s book goes on to describe Keane’s first season in the Premiership, 2007-8, and his pride in leading SAFC to survival in the world’s top league.

So what about his departure from the Black Cats? At the time I likened it to Kevin Keegan’s resignation as England manager after a 0-1 home defeat by Germany: a perfectionist who is used to winning being racked by a level of self-doubt and walking out on his job. Many top players have can have quite fragile egos – look at Gazza for example. But this is not the story that emerges from Keane’s book.
The end for the Irishman did come though; he described a fractious phone conversation with Ellis Short after the change of ownership, which had led to some misunderstandings.

Short accused him of only being at the club one day a week, and told him to move nearer with his family.  The team had just lost 1-4 at home to Bolton and “the conversation did not end well”. It was a case of “no one tells me where I should live” and Keane’s arrangement of a flat in Durham had been working well until that time.

After that call he phoned his lawyer on speed-dial and never went back to the club again; assistant Tony Loughlan brought him the items from his Stadium of Light office.

However, moving is exactly what he and his family did when he later joined Ipswich; the stay with the Tractor Boys, also featured in the book, was relatively brief but they built a house in Suffolk.
Keane made the point in his book that he did not walk out on, or resign from, Sunderland and that matters were dealt with “by mutual consent”, although he never met the current owner face to face. He was out of the door, not wanting to work with Ellis Short and Ricky Sbragia took over. Sbragia led the team to 10th spot at the end of February before a slump set in, but the Scotsman eventually guided our team away from relegation with a 36-point total in 2009 before he resigned and the club appointed Steve Bruce.
Keane admits that he was disappointed in retrospect and wishes he had remained Sunderland manager. That could have happened if he had actually sat down with Ellis Short for a direct conversation.
As one might expect from someone with a short fuse, there were some violent incidents in the Keane era, such as pinneing Sunderland-born Kevin Dillon’s head to a table and grabbing his tie to hold him down after a defeat at Reading – Dillon was on the Royals’ coaching staff and had apparently called Keano a “w**ker” several times during the game. But he generally exhibited admirable calm on the Sunderland touchline.
Yet these incidents still seem to follow Keano around; he was cleared of a recent road rage allegation: http://www.telegraph.co.uk/sport/football/teams/republic-of-ireland/11686473/Roy-Keane-not-guilty-of-road-rage-incident-with-taxi-driver.html
Overall, though, I am grateful to the man, first for bringing Sunderland back to the Premier League, but also for writing a solid account of his 100 games in charge of the club, with some unique insights that fans rarely hear. He comes over as an honest if sometimes too passionate person who still speaks highly of his time at the club.
So we are now looking forward to 2015-16 in the hope that the “Advocaat effect” is extended into the new season and next year, with future transition to another experienced manager who can bring consistent success to the Stadium of Light.
That choice will be absolutely crucial, and my vote would be for our former player Sam Allardyce, after his planned sabbatical. 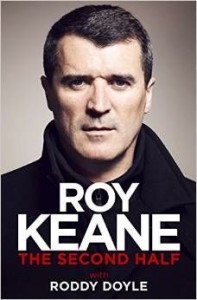 * Roy Keane’s book can be bought via the Salut! Sunderland Amazon link at
http://www.amazon.co.uk/exec/obidos/ASIN/1780228821/salusund-21

4 thoughts on “The Lars Word: from Keano to Advocaat – and then Big Sam?”

Next Post
Relegation 2016: Bournemouth and Watford, Norwich or Leicester. Not Villa or Newcastle (or SAFC)