Fresh from his media blitz – video clip for The Guardian, Total Sport on BBC Radio Newcastle –
Pete Sixsmith climbs back upmarket to share with Salut! Sunderland readers the 10 things he’s hoping for in the coming season …

1 That we have a quiet end of season with a few meaningless games as we sit safely in the upper mid-section of the table, top of the “S” clubs having scored 70 goals, beaten Newcastle twice in the league and twice in the cups and filled the Stadium of Light with proper football supporters, not the clappers and tourists who turn up at Stamford Bridge, Old Trafford and Ashburton Grove.

2 To see any club(s) break up the apparent top four monopoly of Chelsea, Manchester City, Arsenal, Manchester United with Liverpool and Spurs trailing them and the rest puffing and panting in the peloton. I think many genuine supporters have an irrational dislike of the six clubs mentioned. I can take City, Arsenal and Spurs at a pinch but the other three annoy me to death – which shows how little there is in my life to get excited about.

3 For the national press to switch off from the self-styled Big 4 +2 and look at football in general. I love The Guardian, it has good football writers and some valuable insights but every day there are stories, often of no interest to anyone other than some Old Trafford obsessive from Oxford or an Anfield aficionado from Andover, while the rest of football is squeezed in to five columns between croquet from Wimbledon and Badminton from, er, Badminton. And if the Grauniad does that, I dread to think how much coverage other clubs get in the red tops.

4 Wouldn’t it be good to see one of the bigger clubs go down? The last one to do so were Our Friends from the North but I feel that they blew their chance of a day out at Blackburn last season. Villa are vulnerable as are we, but I would love it, just love it, as KK once said, if a Liverpool or Chelsea were dragged down. Well, an old man can dream can’t he?

5 That we get to at least one cup final and win the bloody thing. Heaven would be knocking Newcastle and Middlesbrough out on the way to Wembley, thereby cementing our position as “Cock of the North” and bringing European football to the Stadium of Light. If Bala Town, Lincoln Red Imps of Gibraltar and HB Thorshaven from the Faroes can do it, why shouldn’t we? Even Hull City played in the Europa League although it didn’t do them much good.

6 Some new chants and better behaviour at away games would be nice. I do get tired of hearing that Alan Shearer is a follower of Onan and that Lee Howey’s brother is a ladies’ front bottom – especially when it is sung by pimply youths who never saw either of them play. By the way, I always felt that Lee was a much more complete centre forward than the world’s most famous fence creosoter, reaching that conclusion after supping a gallon of Robinson’s Old Tom a night. They could also stop the lager throwing extravaganza in the concourses as well, although I don’t blame them for not wanting to drink such rubbish. 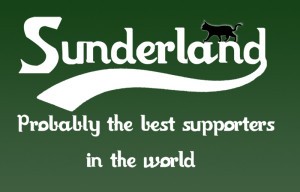 7 I long to see the demise as pundits of Robbie Savage and Alan Green, a combination so insufferable that I would even prefer a match radio commentary done by Lord Haw Haw and Bruce Forsyth. Savage continuously tells us that he has played 600 league games, while Green tells us very little about what is going on on the pitch and regales us with his allegedly pithy comments about the state of the game, the nation, the world and the universe. More of John Murray and Connor McNamara please BBC.

8 Shildon almost won the Northern League last season so I am hoping that they go one step further this. Being greedy, I also want to see them at Wembley and win the FA Vase as it could be the last time that the FA play this game at the alleged “home of football.”

9 Some entertaining football from Sunderland would be lovely. If Stoke City can do it, why can’t we? The last four seasons have been awful with little to inspire future generations as Johnny Crossan, George Herd and Charlie Hurley inspired mine. I have some positive feelings about the upcoming campaign but others do not – four out of 11 Guardian/Observer football writers have tipped us to go down. The only one I now have any respect for is Jamie Jackson who had the Mags dropping into the Championship. Oh how I hope he is right.

10 A season where Jose Mourinho says something worth listening to, Brendan Rodgers pays the ultimate price for jumping the butcher’s queue in Birkdale and Harry Redknapp replaces Steve McClaren in December. One of those might happen ..

Bottom 3: Watford, Leicester and Aston Villa (so no job for me on The Guardian).

Promoted from the Nether Regions: Middlesbrough, Wolves and (a wild punt) Preston.