Skip to content
After Connor Wickham’s home debut for Crystal Palace, in which he hit a post at 1-1 versus Arsenal and generally impressed supporters, the Palace blog HLTCO had this to say:

Having spent four years at Sunderland, Connor Wickham could be forgiven for thinking that football fans seldom get behind their own players, but after his first experience in a red and blue shirt at Selhurst Park, the striker was quick to reference the backing he received.

The writer did not expand. He may have had in mind the stand-emptying gesture that reappeared in Saturday’s defeat to Norwich having been seen in the equally wretched game against his own team last season.

But is the implication that our fans do not get behind their players remotely fair? Of course it is not. Given what they have been required to endure almost throughout the present nine-year Premier run, the wonder is they stay so loyal and supportive.

I do not imagine the coach operators in South Norwood have a problem providing enough vehicles for Palace away games, though I invite HLTCO to provide stats to prove or disprove my assumption (having a small ground works as an excuse only for the massively smaller home attendances).

It is easy for those of us spend part or all of the year in foreign exile to say we would not walk out of a match with a lot of time, maybe even the second half and more, still to go. When you consider what the week-in, week-out support has seen as an alternative to entertaining, effective football in recent seasons, it is hard to criticise.

For last season’s game at Palace, Sunderland sold 2,273 tickets (including one to me). It was the first away game after the 8-0 mauling at Southampton, which I also attended. Even allowing for the sizeable proportion of southern-based fans, that is support at a phenomenal level for a round trip of 580 miles for a midweek evening fixture. It’s bad enough getting there from west London.

When Palace travelled north for the return game, it was what used to be a normal Saturday afternoon kickoff and Palace were on a roll. I can find nothing in a cursory online check but would guess they brought between 500 and 1,000 supporters (if this is any guide, their match at Swansea drew an away contingent of about 1,200; but see comments below for an update – I was wrong, though the point stands).

And what happens at away games when Sunderland play as badly as they can? The fans given incredible backing, singing “things can only get better” and roaring their side on to the most improbable of fightbacks. Some left early as the goals flew in a St Mary’s, but most of us saw it out to the bitter end. Plucking a couple of games from the air, anyone present at Hull the season before last or the Emirates last season will testify to the full-hearted commitment of the away support.

Attending football games almost certainly hits the pocket harder, in terms of proportion of disposable income, for people in the North East than London. Yet a team that turns in abysmal performances with such monotony finished sixth in the Premier league table for average attendances last season. Our 43,000 compares somewhat favourably with Palace’s 24,000.

But once the money has been paid and the journey made, the supporters feel entitled to express their feelings according to what they perceive to be the effort, passion and basic footballing technique on display. They’ll even put up with dire quality if they sense the players are giving it everything they have.

If Wickham considered the supporters did not always seem to be fully behind the team at Sunderland, he would also know the reason why. 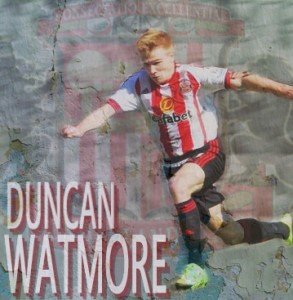 Duncan Watmore will tell him the other side of the coin, coming on with the team three-down and 20 minutes to go, playing his heart out and having the remaining supporters practically blow the ball into the net for his consolation goal. By the same token, if Jermain Defoe really is acting like a southern whinger, wanting a move closer to London (some wag rightly suggested Leyton Orient might be suitable) so soon into his contract, he can expect a cooler reception.

The relationship between Sunderland and Palace fans is not always especially warm. But in case Palace fans generally or HLTCO in particularly think we’re a bunch of chippy northerners boasting about our garden shed being bigger than their ground, they might bear in mind that one of their supporters, the actress Kellie Shirley, was shortlisted for last season’s Salut! Sunderland HAWAY awards for interviews with opposing fans.

19 thoughts on “Wickham’s reception raises question about Sunderland, Crystal Palace and their supporters”