Pete Sixsmith is not dewy-eyed about Jeremy Corbyn, whose victory in the Labour leadership poll was announced as he (Sixer) was gawping at Michael Foot memorabilia at the National People’s Museum. He just cannot get that song by a Sunderland-supporting folk singer, Bob Fox, out of his head. Labour’s post-war victory, so it went, would mean jobs and holidays in the sun for all and the Lads to win the cup. Package hols were the easy part, the jobs bit never happened and it took 28 years for the cup prediction to come true. We’ll leave Sixer to muse over how long it will take Corbyn to get the Lads back to a winning Wembley visit. Here’s what else he did on Saturday …

International weekends and Sunday kick offs give me a chance to do some exploring in the leagues below those run by the FA, the Football League and Sky television.

The recent international weekend saw me touring South and West Wales at Port Talbot and Carmarthen, ticking off two Welsh Premier League clubs and doing senior ground No 91 by taking in Bristol Rovers v Oxford United at The Memorial Ground.

Having “completed” the 92 last season, I was stymied when Rovers and Barnet came up from the Conference, so The Mem and The Hive just had to be done as soon as possible.

For the weekend of the Spurs game, I looked for an FA Cup tie involving a Northern League club on a ground I have not been to but drew a blank. I thought about Leamington v Stamford but trains were pricey. So I opted for a brand new ground which was hosting its fourth league game and which gave me an opportunity to visit a city renowned for its radicalism, its football and its ale.

No prizes for guessing that it was Manchester, home of the Peterloo Massacre of 1819, two of the biggest teams in English football and Joseph Holt and Hyde’s splendid ales. Trains were frequent and relatively cheap and this was an ideal opportunity to tick off FC United of Manchester, who had just moved into their new stadium at Broadhurst Park.

FCUM are a fan-founded and fan-owned club, formed in the aftermath of the Glazer takeover and have, over the 10 years of their existence, moved up through the leagues, rising into National League North for this season.

They have no sponsors; nobody’s name is on the player’s shirt fronts and there are no executive boxes in their brand new stadium.

They have played at dear old Gigg Lane (fondly remembered for that wonderful night in 1999), Bower Field, the home of Stalybridge Celtic and Curzon Ashton’s Tameside Stadium, a relatively new ground which had some influence on Broadhurst’s design.

I spent a couple of hours in the People’s Museum in Spinningfields, once known as the National Labour History Museum and was admiring Michael Foot’s “donkey” jacket (bought from Harrods and minus NCB on the back) when news came through of Jeremy Corbyn’s overwhelming victory in the Labour Party leadership contest. Spontaneous applause broke out from the visitors and I swear that the Foot dj twitched in anticipation of socialism returning to the Labour Party after a lengthy vacation.

I took the tram from Central Manchester to Moston and Newton Heath, the area where the original Manchester United were formed by workers in the Lancashire and Yorkshire Railway’s Carriage Works in 1878, so this was a return to roots for FCUM. The Railway, a large Holt’s pub, typical of their estate, sat at the top of the road, selling Holt’s distinctive Bitter, a beer that is redolent of the 1950’s before we were invaded by foreign lagers, keg beers and fruity chemical ciders.

The club and pub had joined together to finance a bus to take fans to the ground but I chose to walk off the lamb hotpot eaten at the Museum and the ale supped in The Railway and strolled the mile from pub to ground. The ground was built on playing fields used by Moston Juniors. The city council allowed FCUM to build there as long as they shared with the Juniors, which they agreed to with alacrity. They were determined to be part of the immediate community.

They started work in November 2013 with plans for a main stand and terracing behind both goals. They had a stroke of good fortune when they purchased the old Dane Bank Stand, a leviathan of a stand, from the defunct Northwich Victoria Stadium and placed it behind the goal that ran parallel to the main road.

It took 18 months to build the new stadium to National League standards and it was well worth the wait. I was impressed with the fact that it is ecologically sound, with wood being used as a fascia; historically accurate as well as it reflects the origins of the original Manchester United. I liked the ground and enjoyed the game that was in front of me.

The visitors were Corby Town so it was last years Northern Premier League champions against the Southern League champions. Both sides were evenly matched, with the Steelmen the better organised of the two. But, like Spurs 24 hours later, United later grew stronger and nicked a goal just before the end, much to the chagrin of a noisy bunch of Corby fans who rather spoiled themselves by wearing black and white striped shirts. They are the clubs colours but for this game, and for my sake, they wore purple. 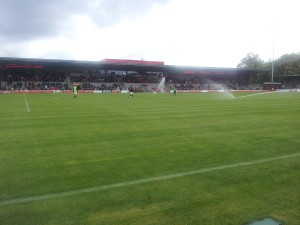 The ground is still a work in progress with much fitting out to be done, but they have come so far that they will complete it sooner rather than later. The National League beckons for them and then maybe the lower reaches of the Football League, which is a long way to come for a fan owned club. I wish them well in the future – maybe they will be playing another team in black and white stripes in a few years’ time.

Next Post
Buck’s Fizz and Fabio’s Bar. Sunderland and Spurs on a Sunday