It’s only a couple of years ago that I was at the SOL to watch us gain a win against Man City. Phil Bardsley scored the only goal in what turned out to be one of many games that season where we kept a clean sheet. Would that we had defenders like Bardsley now, and that we could keep a clean sheet for even 45 minutes. We’ve lost that toughness in defence, we’ve lost our midfield and, Borini aside, we’ve also lost the scoring touch we had a few games ago. Maybe that’s because Sam won’t even give our best and highest scoring forward a start. 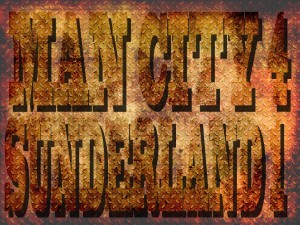 What does Sam himself have to say about this? Find out for yourself as I leak the top-secret, “eyes-only” letter he sends to Colin, and perhaps to a couple of others, after the game:

I have to apologise to you after you made the long journey north and to all of the other Sunderland fans who travelled today.

We all knew it was going to be difficult against Manchester City, but I did expect us to show a little bit more fight and determination.

Losing three goals in the space of nine minutes is something you cannot do; you can’t afford to make the kind of mistakes we made.

Our play out of possession has to improve and that is where our problems lie at the moment.
We can look neat and tidy in possession, create a few chances, but when we lose the ball we are not defending correctly as a team at this moment in time. Too many teams are scoring against us.

It isn’t a slow start, because the lads were doing okay. With the lapses in concentration and the way City scored it looks like a slow start, but it’s individuals at that moment in time not doing their job correctly.

Younes Kaboul is out and we know the key strength of the side is down the middle. John O’Shea was limping at the end and that makes life more difficult.

If we lose John, Wes [Brown] has only just come back from a bit of an injury and of course he hasn’t played that much.

The only way to go forward is to get clean sheets.