Nathalie Randall is Monsieur Salut’s younger daughter, a very decent footballer (for Old Actonians, who play in quite a good women’s league with Premier in its title), a great mum to Maya but a very disloyal child. Despite being frogmarched to Sunderland games from an early age, she supports Liverpool. She has already explained why on these pages and, believe me, it doesn’t bear repeating.

But here, Nathalie looks forward to Saturday’s game at Anfield.

Yes, her pocket money has been stopped before and it doesn’t work …

This weekend brings us Liverpool vs Sunderland again. This fixture has always held massive interest in our household given that my father is an avid Sunderland fan and Liverpool are my team.

I have seen this fixture three times with my dad, maybe more, and countless other times on television. There have been a couple of controversial events, namely the McAllister dive which my dad still hasn’t got over, and the beach ball saga (which I have).

Opposite way round in our family, as mum is disappointed by daughter's decision to support SAFC. https://t.co/F8RfL4Y4dB

But my favourite occasion of watching both teams in action has to be the 1992 FA Cup Final at Wembley.

I was 13 and it was my first proper taste of Wembley (being dragged to see the London Monarchs a bit before that – or was it after? – doesn’t count). I was taken in by the whole atmosphere, no problems with either set of fans and it really felt like a family day out.

My heart did break a little bit when I found out my hero John Barnes was injured and wasn’t in the squad, although we did have an exciting young player called Steve McManaman. I don’t recall much of the Sunderland side but I do remember John Byrne was in fine form. Hadn’t he scored in every previous round in that year’s FA Cup?

The occasion must have got to my dad too as he bought me one of those huge Liverpool flags (which, being at Wembley and now I am a parent myself, I can only imagine was grossly overpriced). According to dad, I did proceed to spend the entire match waving it in his face.

Of the actual game, my memory has not retained much detail. I do, however, remember Michael Thomas’s fantastic volleyed goal in the first half after a marvellous jinking run by McManaman.

In my young mind, it was truly at that point the best goal I had ever seen and I was in awe. Looking back on it now on the TV, while still a great goal, I wouldn’t hold it now in as high esteem as I did then. But back then I was absolutely blown away. My dad had to grin and bear my pure excitement. 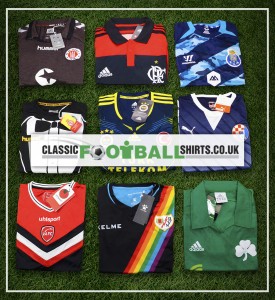 ** Our friends at Classic Football Shirt have a big clearance sale, “a huge range of original footy shirts from all around the world starting at £10”: check out the goodies at
bit.ly/1TGM9Lj

Looking back, my dad must have been hugely disappointed. The chance to win the FA Cup, which hadn’t been done since 1973 for Sunderland, must have been an exciting prospect but it is the sign of a wonderful parent that despite his disappointment, he genuinely appeared happy for me.

Ian Rush wrapped the match up in the second half with a typical poacher’s goal and that was it, the cup won. Up until that point, that was the happiest moment in my young life.

I recall forcing my dad to stay for the lap of honour and I recall Bruce Grobelaar looking at the tier where we were and waving and being convinced in my naivety that he was waving at me.

Other times dad’s taken me to Liverpool-SAFC games include when we queued to stand on the Kop when we beat you 2-1 (he’s says Sunderland were robbed) and a strange friendly that neither of us properly remembers.

He drove us up to Sunderland from London, and back again immediately after the match. He tells me Liverpool won 3-2, so it cannot have been the last game ever played at Roker Park since Sunderland won that one, in 1997, 1-0 according the safc.com. All I remember is making him stop at Little Chef on the way back.

He has, of course, dragged me to lots of other Sunderland games not involving Liverpool over the years. I’ve dragged him, in turn, to Liverpool games at QPR, Wimbledon and elsewhere.

On to this weekend’s game. I fear for us to be honest.

Sunderland seem slightly rejuvenated at the moment with the new signings and I think it is shaping up more into a typical Big Sam team (minus the big striker up front although it remains to be seen what his plans are for N’Doye).

I am a big fan of Defoe’s, always wished Liverpool had bought him, because although he can be frustrating sometimes in his general play, he will ALWAYS get you goals, always. If used in the right way, and he gets the service he can be the difference between relegation and survival.

As for us, we are deeply inconsistent and cannot score so the game can go either way. Unluckily for you, it could be the match that the likes of Coutinho, Sturridge and Skyrtel are all back. I would think we would win if this were to be the case, but without them, we are vulnerable especially at the back and I don’t rate Mignolet much

Prediction: I am going with 1-1

Next Post
Pep Guardiola, Louis van Gaal. These Manchester Men matter, if only a little