With our regular Boro-supporting visitor Smoggie in mind, this is essentially a repeat of the SAFC v MUFC ‘Who are You?’ (see our exchange at https://safc.blog/2016/02/manchester-united-who-are-you-maybe-newcastle-not-safc-for-the-drop/). If you have already read it, feel free to move on. But Smoggie noticed that while Monsieur Salut had conscientiously chopped away at assorted references to ‘s**t’ and ‘p***’, he had overlooked a stray ‘f***ing’. That meant, as it does in the slightly odd world of the web, that prudishness on the part of A N Other stopped the otherwise excellent Q+A reaching much of an audience.

Which would have been shame as we received a great set of replies from Chas Banks*, a committee man with MUDSA, the Manchester United Disabled Supporters’ Association. He’s Old Trafford born, not remotely a Glazers man and even followed the breakaway FC United of Manchester for a year until he found the just couldn’t give up MUFC. His disability is a result of ‘a weird thing called Transverse Myelitis’ which he contracted in 1996 and is tricky to diagnose. In those days, waiting lists to see a neurologist were running at around 22 months. A ‘natural organiser’ with a history of pop music management – see the Teenage Fanclub above and the Pixies below – Chas has plenty to say, most of it spot-on (we’d part company on the cheating question).

Chas had us down for relegation in his initial response but changed his mind a little after watching Newcastle at Everton on the TV.

So here we are again with Chas Banks, and – promoted to greater prominence – the bands he’s been involved with …

Check out the website of our pals at Classic Football Shirts. They’re rather chuffed with their range of Sunderland away tops from recent years. 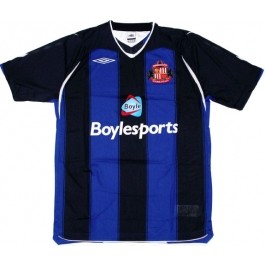 Salut! Sunderland: Hit and miss all season for Manchester United. Is LVG up to task, has he the players to restore former glory and, if no to either, what needs to be done?

Chas: The truth is no one knows about LvG. However, Ed Woodward is massively invested in him & won’t give him up easily. When the club hired him, most of us thought it was a decent call and he did get us back in to the top four in his first season. The football wasn’t that bad at the beginning! 🙂

A lot of players have left the club and some of us thought maybe too early. However, United is no longer a football club in the traditional sense of the word. It is a business with a football club attached to it. That’s why the Glazers are cutting all departments (including the already neglected and under funded academy) by 15 per cent and that’s why they wanted to get the wage bill down by releasing players.

New players have arrived of course and most of them seemed like good buys at the time. Depay was courted by many clubs, Rojo is the left back for Argentina, Darmian is the right back for Italy, Swchweinsteiger was courted by Arsenal. We’re all hoping they will improve and soon!

Still on LVG, is it embarrassing or entirely understandable when an extravagantly rewarded man whinges about media criticism?

Most United fans find his pressers quite amusing. He’s got a ego the size of Wales (which you need if you want to manage United) yet is very prickly. We think he’s worried about his legacy. Mostly though we’re too busy worrying about how s*** we’ve been (apart from last night against Stoke) to work about what he says in press conferences.

I hope I am not alone in having lots of time for Manchester United, a legacy of childhood memories of pre and post-Munich, but do you sense that with Chelsea’s decline, you are again the team to hate?

I doubt it to be honest. Most people are too busy laughing at us. I think City will take on that mantle, which will kill them by the way. All the City fans I’ve ever known are desperate to be loved!

What was your minimum expectation for this season and what do you feel will be achieved?

Do MUFC – and other clubs for that matter – treat disabled supporters well enough?

MUFC do in spades, most don’t. It varies massively. Most of the issues are about basic things like being able to see the game when people stand up and keeping safe. You’d be amazed how many people in wheelchairs get knocked out of their chairs and hurt. Sometimes quite badly.

Think back over your time as a supporter. Highs and lows?

Highs: the 1968 European cup final, winning the league after 26 years, the Treble (including taking 54 wheelchair users to Barca)

Lows: Relegation in 1974, pretty much every game under Dave Sexton, losing the club to the Glazers in 2005 is the biggest low though.

Best players and worst – feel free to mention players you are too young to have seen in person?

How would the heroes of the past – Duncan Edwards through to Best, Law and Charlton – have fared in today’s Premier League?

They’d have been fine and very, very rich. Best would have p***ed on Messi. He was incredible and hard as nails.

Fans of other clubs mock the brand status of MUFC, the “fans” who couldn’t place Manchester on a map. Does that bother you, even a little?

Not really. For years we had the finest support in the country considering how s*** we were. We still have one of the best away supports even now. There’s nothing any of us can do about the “brand” stuff, it’s the same for everyone nowadays. All supporters try to find a way to “insult”, decry, the opposition, it’s just the way it works. We sit in front of the away fans at OT. They all sing the same old boring songs 99 per cent of the time. See you on the motorway, race you back to London etc, etc.

The branding thing is pretty universal these days I’m afraid. If Sunderland suddenly did a Leicester (unlikely with an American owner) rest assured your club would be whored round the world like ours is.

And do you resent City’s claim to be the true Manchester club more than you envy their unlimited funds?

The “true Manchester club” stuff stemmed from absolute desperation. We’d just won the Treble playing exciting attacking football. The team was full of local kids who’d made their way through from the academy to the first team, they were s*** and in the old third division with a numpty like Joe Royal as their manager. What else could they say?

Their lottery win is just one of those things. It’s no good getting upset about it. Most fans realise that if the Glazers weren’t leeching a billion pounds out of the club we could compete with them without a sugar daddy.

Have you been surprised by Sunderland’s year-after-year uselessness?

Nope. That’s what happens to all the clubs with American owners. Think yourself lucky, you could be a Villa fan.

Any other thoughts on the club, the fans, the city and region, Big Sam?

I miss Roker Park! The fans I feel sorry for, they don’t deserve what they’ve been served up over the years. Big Sam is the best thing that could have happened to you. If anyone can keep you up, he’s the man.

Give us this season’s top four and, sparing no feelings, bottom three

If not mentioned where will our teams end up?

I think Newcastle have spent enough to keep them up.

I just watched some of Everton & Newcastle tonight. I now think it will be them who go down, not you!

Diving, other forms of playacting, timewasting, crowding refs etc. Gone so far we may as well stop bothering or still worth trying to stamp out?

Diving has been going on since football was invented. Ditto time wasting, so I don’t think you’ll ever stop that. Especially as coaches tell players to go down in the box if they feel any contact. Crowding round the referee isn’t as bad as it was, but you’ll never stop it completely. It doesn’t really bother me to be honest. Often it’s just a symptom of a desire to win.

One step your club or football authorities should take to improve the lot of ordinary supporters?

The Twenty’s Plenty campaign should be embraced. The clubs get enough money from the TV companies. Tickets only make up a third of United’s income anyway. Plus an honourable mention to different pricing by teams depending on the opposition. As a United fan I always have to pay top whack. The club is rich, the fans aren’t!

I will. After watching your game against City, I’d say probably a score draw.

* Chas Banks on himself: I’m retired now, but I used to manage a pop group called Teenage Fanclub plus did the European management for a band called Pixies. I was born and grew up in Old Trafford and went to my first game on Christmas day 1957. I’ve been to every cup final since my first in 1963. I’ve seen United win the FA Cup nine times; the league 16 times; the second division title once; the European cup three times; the Cup winners cup once; the league cup four times; and the Charity Shield 15 times. That’s not mentioning the finals we’ve lost either! I now live about two miles from the ground and whatever happens in the future, no one can take that away from me!

Next Post
Manchester United Who are You?: ‘maybe Newcastle, not SAFC, for the drop’