Malcolm Dawson writes…….the sad news reaches us that another celebrity has passed away. Agony Aunt Denise Robertson died today after a short illness. Denise was a lovely lady and Sunderland through and through. As we pass on our condolences to her family, we reprint in tribute the piece that Colin Randall first published here back in February 2007 though the interview dated from a few years before that and originally appeared in Wear Down South, the newsletter of the London and SE branch of SAFCSA, after he chatted to Denise about her SAFC affiliation. 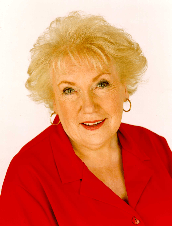 Got a problem? Look no further than the West stand, high above the dug-out. That’s where DENISE ROBERTSON, agony aunt and prolific novelist, sits. She tells of her devotion to city and club.

““Dear Denise, the letter from Lovelorn in Seaburn might have started, back when this was written (namely after two top seven finishes in the Premiership).*

“For years, the love of my life made me feel like an emotional yo-yo. Now, we have a wonderful new home and lots to cheer about. It’s been two years of seventh heaven, and foreign holidays might soon be a reality. I know I should be grateful but find myself wanting more. What can I do?”

After 16 years of answering TV viewers’ problems, Denise Robertson knows better than to brush off any questioner, however frivolous, with a stern “get a grip”.

But she comes close. “Greed is a sin,” she fires back without hesitation. “You already have everything anyone needs to be happy. Be content. The gods have been smiling on us.”

Denise and I first spoke on a Saturday with no match to fret about (well, it was Cup Final day, but that barely counts). She was assembling one of the regular parcels of SAFC memorabilia that she packs off to Paul Davidson, a Sunderland-born, Sunderland-daft nephew in Melbourne. “I send him anything I can lay my hands on,” she says. “Stubs from match tickets, programmes, magazines, team cards I find lying around when I’m invited into corporate boxes at the Stadium of Light.”

Sunderland through and through, Denise was born in Carlyon Street “long enough ago to qualify for a bus pass”. The commotion must have been distracting for the bailiffs who were busy, at the time, repossessing anything of value. Denise’s dad, a shipping broker, had just lost his business and everything with it.

The family moved to Grangetown. Denise was bright, but money was too tight for university to be an option and she began work as a medical secretary at the old Monkwearmouth Hospital. She met a Merchant Navy officer from Shetland and set up home in Seaham, where he was assistant harbour master.

Denise started to write, and won a BBC award for a play, The Soda Water Fountain. Tragically, her husband died of lung cancer soon after it was screened, leaving her with a son and a widow’s pension. More writing followed. She found she could get by if she wrote and sold two short stories a week to women’s magazines. Novels came next; there have been 18, all set in the North East and including two trilogies, notably The Beloved People.

She married again, acquiring four stepsons. Agony aunthood arrived by accident, though her experiences of adversity have proved a useful tool. Widowed for a second time in 1995, she now lives in East Boldon with her third husband, Bryan Thubron.

Denise’s career flourished by stages. From books and newspaper columns, she drifted into broadcasting. After two years with Frank Bough and Selina Scott on BBC Breakfast Time, she moved to BBC’s Open Air, then to Granada’s This Morning. When Richard and Judy depart for Channel 4 (lucky Channel 4!), she will still be there, 13 years on. Someone at This Morning calculates that she has generated half a million phone calls and 90,000 letters.

Always fiercely proud of her origins, Denise’s attachment to football grew slowly. As the boys started going to Roker Park, she found she could work out the result from the sound of the gate and back door at teatime. “A gentle click meant things had gone well. The louder it was, the worse it had been. But if they stormed through the kitchen without a word, I knew it had been a bad, bad day.”

Meeting Bob Wilson and hearing him speak respectfully about SAFC prompted her to see for herself what the fuss was about. Her first game, back in the 1980s, made a big impact. “But while there was bustle, Roker Park was bearable. The SoL was something else. My first visit was in a box, and to emerge into all that noise and colour was like being hit in the face. I wondered whether I could stand the intensity and vigour of the crowd. It frightened me then, but now I relish it.

“My fanship came from what the club meant to Sunderland. As my career took me to London, I realised it was something I could boast about. Through all the bad times, and there have been many, it has been much more than just a game, and I am grateful to Bob Murray for what he has given me in civic pride.”


She remembers sitting up all night knitting scarves for the boys to wear when the FA Cup was brought home in 1973. All that red and white wool? Not quite. The shops had been bled dry of red, and she had to make do with orange. “Terrible stuff,” she admits.

On her own account, Denise is not the game’s greatest authority. “Favourite player? Niall Quinn, but I love them all. Michael Gray for being a Sunderland lad and doing so well. Kevin Phillips, of course. I met him and he was a very nice, unassuming young gentleman. I’d be the first to admit my appreciation is often based more on character and perception than technical skill.”

Denise certainly knows enough to savour the joy of beating the Mags. “After the 2-1 win in November, a video arrived at the studio, special delivery from Robson Green, a huge Newcastle fan. I was expecting his usual clowning. Instead, it showed him saying ‘if you want to know how I feel about the result, Denise….’ He starts to cry and gradually disappears below the camera until, finally, he says ‘satisfied?’.”

Members will have heard the news that one of our Branch Vice-Presidents, Denise Robertson, has sadly passed away after a struggle with pancreatic cancer.

Denise took her Vice Presidency both seriously and generously and her support will be sadly missed. Those who attended our 40th Anniversary celebration at the Emirates may not know Denise, at her own cost, travelled down to London and back to join us on that occasion. I was personally privileged to meet her occasionally since then at Durham County Cricket Ground where she always asked about the Branch and how much she appreciated receiving Wear Down South.

Our condolences go to her husband Brian and all her family, friends, her work colleagues and those who have over the years appreciated the advice she dispensed as the Nation’s favourite Agony Aunt. RIP

1 thought on “RIP Denise Robertson – Sunderland through and through”

Next Post
If this doesn’t inspire the Lads against West Bromwich, nothing will …