There are times when contributors to this site hark back to the music of yesterday, and today is no exception. The transfer window’s  shut (you can insert any other vowel of your choice if you wish) leaving me feeling underwhelmed, and a song from 1971 or thereabouts is in my mind. Not because I like it (I didn’t then and still don’t now). Not because it got to number 1 (it did, but then so did Benny Hill with a song about a milkman). It’s because of the refrain which starts the song and echoes throughout it.

Only, not quite. The song, “Chirpy chirpy cheep cheep” begins, “Where’s your momma gone?”, but my mind is playing it as “where’s the money gone?”

It has gone, and it’s a lot of money, which explains a great deal.

During most of the window it looked as if the club was being more than a touch parsimonious, and even after buying Didier Ndong we weren’t up there with the big spenders.  Yet only a few weeks ago I posted a piece about the Deloitte Money League, which has us at number 25 in their list of the world’s best revenue-generating clubs with €133 millions coming in through the doors in 2014-15.

Even allowing for stadium running costs, new plastic seats and player wages (plus managerial pay-offs) that kind of money should guarantee a reasonable annual top-up for the transfer kitty.

Apparently it doesn’t, so what has happened? I resolved to investigate, with the help of The Transfer League website.

I must begin with a disclaimer. I like the transfer league website but I’m not saying it’s totally correct. In fact, I’d be surprised if it were. These days players move for undisclosed sums and loan fees aren’t publicised.  (Clubs do declare agents’ fees  and the site has a section for them). Then there’s the timescale of payments – transfer fees aren’t usually paid upfront but in installments over the length of a player’s contract, which affects outgoings each year. So I take what I read with a pinch of salt, whatever the source, and I advise that you do the same.

That said, the transfer league site is consistent with what we do know and appears to be as accurate as any other source. It’s well put together, with a wealth of detail, and I’m happy to use it and acknowledge it as a source.

So let’s begin at the Ellis Short takeover.

Roy Keane was the man in charge and he had spent heavily to get us into the premiership and to keep us there. I don’t think anyone will blame him for that but some of his decisions could be questioned. After all, it was he who said of Djibril Cissé “I’d be happy to break the transfer record if Djibril’s doing the business”.  But Keane didn’t stay, and neither did Cissé. The managerial wheel had begun to  spin, creating a vortex that  threw out old players and sucked in new ones. And that had costs for the club.

That wheel may have stopped but the vortex is still spinning. Ten years after promotion we’re more or less where we started: spending to survive rather than building to succeed and, as a consequence of constant turnover, losing in the transfer market. Not since the days of Mick McCarthy has a manager turned a profit. Paolo came close but he wins no medals because of the costs of the clean-up when he went:

Our last half dozen managers have come and gone almost at random, and none have stayed for any great length of time. As a result each new one has found himself with players , many on long contracts, they wanted to move out.

You might think that moving out players would make money for the club. Well, yes, some individuals have been sold for a profit, as was home-grown Jordan Henderson, but apart from 2010-11, when we sold both Kenwyne Jones and Darren Bent, we have never ended up in the black. Mediocre – or just wrong – players have been bought and then sold or released, often at a loss. Some, such as Danny Graham (whose fluke of a goal cost £5 million plus wages) have been loaned out or sidelined until their contract has run out. Consequently the club has spent more than it has recouped every single season since promotion, with the exception of that single one: 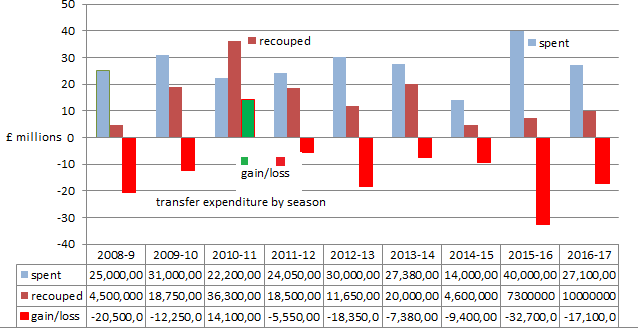 We can simplify that chart to show the gains or losses per season:

Adding the numbers up is telling: Since Ellis short took over we have spent £162 million, with a net loss of £90 million, in order to scrap for safety at the bottom of the premiership.

That might sound a lot but it’s actually a middle of the road sum and you might think it money well spent as it has kept us up.  The point is, however, that the majority of clubs which have spent similar net amounts have achieved much better results.  What’s more, other clubs have done better on less – ESPN reckon Leicester’s squad cost £54 million, although we do have to acknowledge that they spent that over a shorter period of time.

Another way of looking at our transfers is to compare that £90 million loss with our revenue. At today’s exchange rate £90 million is less than the  €133 million detailed above, or even what we generated in 2013-14 (€122 million),  but it is  a lot more than our total revenue for 2012-13, when TV money was a lot less. You could say, with some justification, that our incessant chopping and changing has cost us over a whole year’s income.

When I look at our transfers I’m astounded by our profligacy and the amount of money – over half of our transfer budget – that we’ve wasted. I no longer wonder why Ellis Short wants to rein in our transfer spending, I’m just glad he has bankrolled the club. Anyone who feels critical of him should recognise the unsustainable drain we’ve had on resources and accept it can’t go on.

Currently, however, there’s little sign of change. In the last window players went out cheaply and then David Moyes spent heavily on relative unknowns Djilobodji and Ndong. I’ve no doubt he’ll be spending more in the next window, Anichebe notwithstanding.

That said, Moyes does appear to have assembled a decent squad and does appear capable of finding decent players at resonable prices. I think, I hope, his appointment bodes well for the future. In the meantime, all I’m asking is for us to become middle of the road.

12 thoughts on “Chirpy Chirpy – no. Cheap Cheap – no. But what about Middle of the Road?”