Malcolm Dawson writes…..it’s a long way from Wearside to Bournemouth and those that made the journey for once did not include our own Pete Sixsmith whose ticket was however put to good use by M Salut. David Moyes viewing from the stands, paid his due respects to the Sunderland fans before dashing off his customary post match e-mail in which he acknowledges that for once we had the rub of the green whilst praising his players. 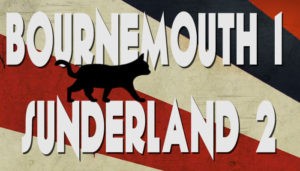 I’m very happy. It’s our first win of the season; we’ll not get carried away, we now need to go out and get number two. I think we got the result today against all of the odds. There was a little bit of luck on our side and we’ve not had that in recent games.

The players worked very, very hard and they did well. Bournemouth will be disappointed they didn’t score from the chances they had but so were we with some of the opportunities we missed.

We had to hang on after going down to 10 men and we played the best part of 30 minutes that way – and it did feel longer, but we kept at it and we got our goal.

Victor [Anichebe] was fantastic today, as was Jermain [Defoe], but ultimately the goalkeeper and the back four did a tremendous job for us.

It’s our first win; let’s not get carried away, we’ve a lot of work to do to climb up the league.

I’m really happy for the supporters, they travel in their numbers and they’ve stuck with us, that result is for them.