Malcolm Dawson writes….as I left Heritage Park on Friday night, having witnessed Bishop Auckland’s 4-0 trouncing of Wembley-bound local rivals West Auckland, Pete Sixsmith said to me: “We could well be safe this time tomorrow if results go our way.” “We can but dream,” I thought, fully expecting Wednesday to be the evening when we could be certain of survival, but I repeated the sage’s words to another group of Sunderland fans who were discussing the significance of the past fortnight on the walk to the car park. I was hopeful that Poyet would have the team organised, that the upsurge of confidence that has come from who knows where since the Tottenham game and the resurgent Wickham could get us a point. But all three? We’d seen what the new manager effect had done to Norwich and Old Trafford is a ground where success (for us) has been notable by its absence since the days of Sir Matt Busby’s team of Stepney, Charlton, Stiles, Best and Crerand. So for our ace reporter, this was one of those performances which reminds him why he sits through so much dross. Sixer looks back on a day to remember, the like of which he hadn’t seen since high jumpers were still using the straddle technique and a change of government in an independent Eastern European country led to Russian interference.

In 1968, as a schoolboy, I stood in the paddock at Old Trafford, dressed in my school blazer, short trousers and school cap, as we won at what was then the home of the English Champions. Little did I realise as goals from Colin Suggett (spotted scouting for Ipswich Town at Spennymoor the other night) and George Mulhall saw us to a win in a game where erstwhile United fan Kenneth Wolstenholme, described us as “being there to make up the numbers” that I would be in my 60s before it happened again.

Forty six years later, with the school uniform ditched for a rather smart linen Harrington jacket and elegant corduroy shirt, I stood in the visitors’ seats and watched an immaculately prepared Sunderland side claim a deserved win to give us every chance of avoiding joining Fulham and Cardiff in the Championship. There were some there who had never witnessed anything other than defeat at the self-styled “Theatre of Dreams”. Four years ago we would have won had it not been for Kieran Richardson’s stupid sending off and an unfortunate og by Ferdinand Minor.

But this victory was a master class in preparation and commitment despite the United fan with a distinctly southern accent claiming on 606 that we had “parked the bus” (he was quickly put in his place by host Darren Fletcher). What our head coach and his staff did was convince the players that there was nothing to worry about and that any team featuring the likes of Carrick, Nani and the dreadful “Chicarito” were there to be taken.

And take them we did. The set up was so right that Ryan Giggs and the rest of the class of 92 should be studying it if they want to know how to organise a team. Four defenders who may lack pace but who can tackle and who can pass; a midfield that gets behind the ball and, as last week, does simple things well and gets forward in support of the forwards; front players who can hold the ball up and play telling balls when needed. We did all of these things and did them so well that it was almost impossible to believe that most of the starting X1 had turned out at WHL at the start of April, a defeat that had me in complete agreement with Gus Poyet that some sort of miracle would be needed.

Well, the miracle arrived in the guise of Connor Wickham, a player who has spent much of the last three years on the periphery of the periphery. His two goals at Eastlands changed our whole outlook and gave us the inner mental strength to beat Chelsea, batter Cardiff and then comfortably win at Old Trafford for the first time since I was at school. Have I mentioned that already?

Fast forward to Boxing Day 2016: Click here to Guess the Score in Manchester United v SAFC and you could win a classy mug. United fans welcome 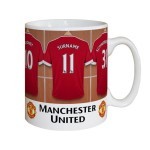 The goal was well taken by Seb Larsson, a player who looked as if he was on his way out but who may yet earn himself another contract after four outstanding games in April and May. He probably would be the first to admit that his season has been underwhelming but his recent form shows us what he is capable of. We may ask why we did not see more of it earlier but let us be thankful for the fact that the Swede has roused himself and has played an important part in the rejuvenation of our club.

Wickham set the goal up, thanks to lazy defending by Darren Fletcher and had another productive game. He was replaced by Jozy Altidore, a perfect player to bring on with 25 minutes left. He showed indications as to why Di Fanti was prompted to bring him to the club; the ball was held up well, he won headers and set up Giaccherini for the shot that hit the post in the 71st minute. Maybe the big man does have a future with us.

All over the field we were better than United, words that I have never written before. I may do so again because on this showing whoever is manager next season has an awful lot of work to do in clearing out players who consistently flatter to deceive and bring in players who will not even have the delights of the Europa League to look forward to.

Our OT old boys must have thoroughly enjoyed the afternoon but must have also wondered about how the club that they left was in such disarray. As Sunderland players, Brown and O’Shea must have taken great comfort from the fact that they will not have that dreaded relegation on their CVs when they come to retire. Both have shown their considerable inner strengths in the last few weeks, and look unbeatable in the middle of the back four – although O’Shea almost contributed to his and Brown’s joint og tally with a sliced clearance early on. That was about the nearest United came to scoring.

By the time you read this, Norwich could have been beaten at Chelsea and we will need one point from the last two games to make staying up an absolute certainty (the Ji case not withstanding). The last four games have been a tribute to the coaching and motivational skills of the management team. They have picked a settled side and have stuck with it, putting their trust in the rapidly improving Santiago Vergini, the experienced Seb Larsson and the young tyro known as Connor Wickham. Not all fans welcomed the inclusion of all three but it shows what we know and what good coaches can get from players if those players are prepared to buy into it.

The whole day was lovely. Good weather, a stop in Bury, where the market is huge and a fine pint of Mild on the East Lancs Railway bar was taken surrounded by excited children awaiting the arrival of Thomas the Tank Engine. Ringo Starr and Michael Angelis have a lot to answer for.

Our seats in the soon to be renamed “Theatre of Mediocrity” were close to the tourist end where the vast array of United fans who travel from all over the world (and Salford) arrive to pay homage to the Red Devils. That most of them were heading back to their Holiday Inns and Travel Lodges after 70 minutes says much about the modern fan. I have never heard a quieter OT crowd or seen as many empty seats. Some didn’t even bother coming back for the second half. Presumably the Superstore was more attractive than the actual match.

The journey back was an absolute pleasure. The coach glowed with pride and contentment as praise was heaped on the players and management by assorted BBC correspondents. Robbie Savage (a much improved pundit) said that, should Liverpool not win the title, Poyet should be manager of the season. Many on the coach agreed with him.

The M62 was at its glorious best as we crossed the Pennines from Lancashire into Yorkshire. The views were magnificent, there was cricket being played on four grounds, including Outlane near Huddersfield, where it must be possible to hit a six all the way to Halifax. Even the Magnum purchased at Hartshead Moor tasted of champagne.

2 thoughts on “Manchester United vs SAFC: recalling a glorious win when Jozy shone too”