Jim Minton makes a welcome return to the pages of Salut! Sunderland with a Sunderland fan’s eye witness appraisal of the Africa Cup of Nations. He has been there with a Chelsea-supporting friend, watched two SAFC players (but not, sadly, Kone) in action and offers these impressions before he heads with heavy heart to the Hawthorns on Saturday …

The African Cup of Nations gets a bit of an unfair press back in the UK. Managers and fans tend only to bemoan the loss of key players to what they perceive as a Mickey Mouse competition involving countries that most of us couldn’t readily locate on a map.

That’s a pity, however, as AFCON is, behind the World Cup and UEFA European Championships the third biggest international competition, with many top quality players spread throughout the 16 teams.

And while pretty much the only stories you read about African countries in the news are that they are dangerous, war torn or poverty stricken, being present at the tournament is a welcome reminder that for the most part the continent is peaceful, friendly and an amazing place to spend time.

Gabon is the host country for AFCON 2017, and me and my mate Mark decided, to the slight puzzlement of some friends, that we fancied a bit of an adventure. So we have spent a week here in Libreville enjoying the sights and sounds of the first week of the tournament.

For the uninitiated, Gabon is on the coast of West Africa and straddles the equator. “Just below the armpit,” one local told us. Which is appropriate, given the amount of sweat the tropical climate has wrung out of me.

Gabon is also, by coincidence, the birthplace of Sunderland’s record signing, Didier Ibrahim Ndong. Like the tournament, Didier himself divides opinion, with some believing we’ve overspent on an average player while others, like me, see a lad with potential, but struggling for consistency in an awful side.

So as well as offering the chance to experience a new culture, see different cities and sample exotic foods, the tournament presented an opportunity to see Ndong in a different context, alongside his Gabonese colleagues, as they played out their opening matches at the Stade Amitie in Libreville.

The stadium was built for the 2012 tournament – which Gabon co-hosted with Equatorial Guinea – and is in very good condition. Unfortunately the same can’t be said for transport access.

As in much of Africa, infrastructure is a big challenge in Gabon: simply, the population and the number of cars have grown far faster in recent years than the government’s ability to build roads. Hence, gridlock. If you think the new West Ham ground is a pain to get to, try sitting in 30 degree heat for 90 minutes in non-moving traffic, being serenaded by lorry loads of horn blasting, dancing, exuberant young men. Like an Eddie Murphy film, it’s fun for a while, and has memorable moments, but in the end you can’t wait to get out of your seat. 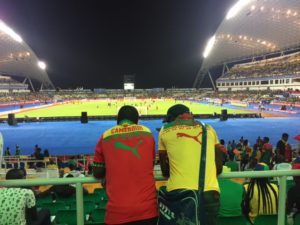 The tournament scheduling gave us the chance to see two days of double-headers within Group A, featuring the hosts Gabon, unfancied Guinea Bissau, Burkina Faso – who’d reached the final in 2013 – and one of the big guns, Cameroon.

Our friendly Gabonese host purchased our tickets locally for 2000 Central African Francs (or about 3 euros) for the first pair of games. We met a lad from Ireland who’d bought his through a travel agent, shelling out an eye watering 80 euros for the pleasure.

On both days, the atmosphere in and around the ground was fantastic – just as exciting as being part of a big crowd at a game in England, but different: although supporters here passionately back their team – through costume, song and dance – it feels celebratory rather than confrontational.

This may partly be explained by the fact that as a relatively rich country, Gabon hosts a large number of workers from other west African nations= So the guy we sat next to was a Cameroon supporter, who like many others in the stadium had built his life in Gabon. But without being starry eyed about it, there did seem to be a camaraderie and spirit of supporting “the game” as well as the team.

This makes it easy as a neutral to enjoy matches, and it is certainly colourful and noisy. Also despite the heavy corporate sponsorship – which may grate on some – the advertising hoardings at every game do carry a message on behalf of the AFCON Foundation which expresses hope for a healthy, educated, empowered youth to make a better future for Africa, which feels a positive and welcome statement.

The four matches we saw were overall pretty good – and the consensus among the fans was that this tournament has already created more on-pitch quality than previous editions managed.

The hosts, Gabon, look the weakest of all the Group A sides. Their talisman and main striker Pierre Emerick Aubameyang has so far kept them in it with a goal in each of their games (one from a penalty he won) but on both occasions they’ve ended up drawing – first to Guinea Bissau, then Burkina Faso – and could have easily lost.

Sunderland’s Ndong has played in both games. Being the only Gabonese in the premier league, he is something of a celebrity here, but chatting to the fans in the bars around the ground their view was that while Gabon generally were “not good enough”, Didier was, “just about better than most”.

In the first game he was tidy, heavily involved and composed throughout; in the second, however, he turned in an error-strewn display – no worse than most of his team mates, but not really much better. Let’s hope he will do himself justice in the last group game versus Cameroon on Sunday.

Cameroon look the strongest side in the group. They drew versus Burkina Faso, shipping a late equaliser after missing some good chances but turned round a one nil deficit to beat Guinea Bissau 2-1 in a tremendous game featuring one of the best goals I’ve seen for some time: Bissau’s Brito Silva “Piqueti” ran virtually the length of the pitch before lashing the ball home to wild applause all around the stadium.

Guinea Bissau look a team that is much better than the sum of its parts – largely Portuguese second division players – but, like Iceland last year, a lot can be achieved with good organisation and team spirit. And Burkina, who have two creditable draws, look good while lacking cutting edge.

Our days between games gave us the chance to watch the rest of the tournament in the comfort of Libreville’s beach bars. The highlight so far has been Zimbabwe surprising – and almost beating – Riyad Mahrez’s Algeria.

The Zimbabweans recovered from going an early goal down to lead 2-1 and had chances to extend their lead before Mahrez struck his second with less than 10 minutes to go.

As a measure of the interest here in the tournament – and perhaps a reality check to the cheerleaders for the Premier League’s global dominance – in a busy bar in Gabon, the locals voted overwhelmingly to keep watching the Afcon game, even though Man United and Liverpool were grunting out a 1-1 draw on the other channel. We voted with them, and we were rewarded with a classic.

The other games haven’t hit those heights, but Wahbi Khazri put in an excellent performance as a second half sub for Tunisia against a strong Senegal; he had a number of efforts on goal, including a trade mark in-swinging corner which looked like it crossed the line (but there is no hawk-eye in Gabon) and made himself busy and productive over a very good 45 minutes. Tunisia failed to take their chances, though, and ended up losing 2-0. 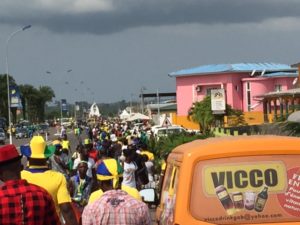 Our trip ended after a week. It had been a great adventure, and the few days had given us a great flavour of what – despite snootiness of the Premier League and its acolytes in the British media – is actually an exciting and good quality tournament, worthy of support and respect from anyone who enjoys football.

For anyone interested, the next African Nations’ will be in Cameroon in Jan-Feb 2019. If you like football, good company, a bit of an adventure and can stand the tropical heat, then why not give it a try. At least you’ll see a tournament where you won’t have to worry about England disappointing; and you never know, a Sunderland player might make himself a global hero. Although he’d probably still have his critics back at home.

1 thought on “From our own correspondent at AFCON: out of Africa with Ndong and Khazri”