John McCormick writes: When Alfie N’Diaye pops up with a goal for your relegation competitors you know the Gods of football can’t be happy with you. What, then, must they feel towards Sam Allardyce?

Not that anyone’s complaining, of course, apart from perhaps a few of the fans who left Selhurst Park early after our own midfield did what it has needed to do since August and not only snuffed out the opposition but also scored a game-changing goal.

And how do the Gods of football feel about Pete Sixsmith?  Was he there watching Kone and Ndong and, of course, Jermaine Defoe? I think not because this report comes courtesy of Bob Chapman

After the encouraging performance the oth 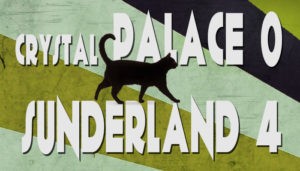 er night against Spurs, I found myself unexpectedly not particularly enthused about a trip to Crystal Palace. I suppose you get used to disappointment with Sunderland and that there is no expectation that you have a divine right to win. Elation followed by depression seems to be the norm for a Sunderland supporter these days. Although we had good recent history and had won the previous two encounters at Selhurst Park, I would have been really pleased to come away with a 0-0.

Originally, 5 of us were going to travel down, however that was down to 4 as we set off for London. We decided that we would drink in London Bridge prior to the game and now that the trains were back to normal, Norwood Junction was only 13 minutes away. The Old Kings Head is a favourite watering hole, but this time we decided to go to The George . It was a disappointment. With the building of The Shard and the redevelopment of Borough Market, the London Bridge area is now very popular and clearly on the tourist trail. The George itself is a fine Tudor period building and well worth a visit. However the beer on offer was disappointing, akin to medieval mead/dishwater, if you get my drift ; so it was back up the road to the Old Kings Head. A much better choice, but with Chelsea v Arsenal on the screens it was much busier than normal. We left just as Hazard scored his wonder goal. If only Januzaj could match that strength I pondered and equally expected that Borini would start instead of him alongside Defoe.

Walking to the ground brought back memories of my first ever visit and why I have no great affection for this club or its ground.

It was in 1969 and only their second home game on finally reaching the top division. As a naive 14 year, I assumed that with our pedigree we would walk all over these precocious newcomers who had spent all their history in the lower divisions. With stars like Calvin Palmer how could we lose, I told my Dad! Needless to say we lost 2-0 and they ended the season one place above us and avoided relegation, unlike us! It was a long drive home and the resentment against this club had set in. Perhaps the biggest ever disappointment at this ground was the 1997 relegation, when a 1-0 defeat to Wimbledon sealed our fate on the final day of the season.

Arriving in the ground, it was a surprise to see Januzaj in for Borini. I thought the only change from Tuesday night would be the introduction of Oviedo for Manquillo. Despite Palace winning the other night I did expect to see Schlupp and Sakho make their debuts. Big Sam’s first mistake I thought?

There is no coincidence that the return of Kone and Ndong to the side has seen an upturn in form. I must admit I thought that the early departure through injury of Kone at Burnley was the last we would see of him in a Sunderland shirt. For him to remain and PVA to depart for £14M has to be excellent business.

Sunderland have usually held their own this season up to and when we concede. Heads drop and we always struggle to raise our game and get back into it. Fortunately after an earlier Defoe effort we took the lead in the 10th minute. Larsson found Kone with a free kick and with Hennessey under pressure the ball fell back to the grounded Kone who volleyed the ball in. With gaining confidence, our midfield trio of Rodwell, Larsson and Ndong were getting the better of their Palace counterparts.

It’s always dangerous to lose a lead just before half time and with those thoughts I decided to stay put for the last few minutes. I’m sure there were many who left at 1-0 to get refreshments or use the facilities only to return when it was 4-0.

Ndong made it 2-0 opening his account with a stunning left foot drive and then 2 minutes later Januzaj fed Defoe to make it 3. Seconds later Defoe got his second with a sweet turn on Tomkins to drill it past thehapless Hennessey.

4-0 up at half time I thought, this must be history for me. I’ve seen a number of wins by this margin away from home over the years; Bradford City comes to mind but not by half time. I remember scoring 6 against Bristol City in the League Cup in 1990, but whether we had 4 before half time I can’t remember. 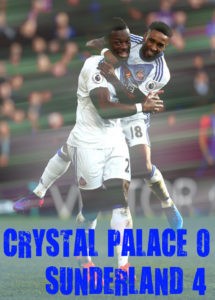 by this amount couldn’t stop me looking at my watch every minute throughout the second half. I don’t know why, because although they had plenty of possession they didn’t pose much of a threat.

As the whistle went I thought “What must PVA and Sam Allardyce be thinking?” As we all know Big Sam saved us last season, but has made plenty of Big Mistakes in his time. Then I thought of Jermaine Defoe. He proved yesterday that Sam made a huge mistake in not picking him for his first England squad. Age does not matter with Jermaine because he is a top professional who looks after himself. It will be interesting if Gareth Southgate continues to ignore him as well. I suspect he will, which will be to our benefit, but disappointing for the best English finisher by a mile.

After the match we made our way back to London Bridge for a celebratory drink, only to find all the usual pubs heaving with people watching the rugby. Instead we headed to the Betjeman Arms at St Pancras and despite still being at the bottom, enjoyed a drink under the historic arches.

“Is this the turning point?” we wondered.

And if you do need a Sixsmith fix you can visit the ESPN website, where he appears to have been subbing for M Salut

5 thoughts on “Sixer’s sub’s Soapboax: Crystal Palace – plenty of possession but not much of a threat”

Next Post
Rob’s one word ratings. Who got a 4?