John McCormick writes: I didn’t see much of last night’s game. I did see Jack Rodwell’s foul and would have had him off at half time to prevent a potential second yellow. But David Moyes apparently didn’t think there was any need to worry; Rodwell stayed on and had a “quietly effective game”, according to Pete Sixsmith.

What else did Pete note?

Find out for yourself as he regales us with not only another fine match report but also a slight diversion down memory lane, past Roker Park and towards 1961, when Spurs used only 17 players, all from the UK, in doing the double.

In the oft lamented olden days of myth and legend, a Spurs team full of fancy dan southerners,as soft as a bag of marshmallows, would step off the bus at a damp and gloomy Roker Park, would take one look at Charlie Hurley and Jimmy McNab and would count the minutes until they could be deposited at their club houses in Chingford and Cheshunt after a cuffing by the uncivilised northern hordes.

Sheer legend of course. Dave Mackay was frightened by nothing and probably made Jimmy Mac think once or twice about clashing with him. Bobby Smith was a less subtle version of Billy Whitehurst (and a marginally better footballer) and even the erudite and cerebral Danny Blanchflower could look after himself. After all, he was fetched up in Belfast – even rougher than Boldon Colliery.

The current Spurs team can also look after itself and I regard them as the best team to watch in the FA Premier League when they are on form. Players like Dembele, Alli and Kane are outstanding, Eriksson can be and Rose and Walker are the best full backs in the division. Unlike some we have had they can attack and defend.

So, a point taken from the Spurs is a point won and almost a cause for celebration; if it’s not that, at least a cause for mild optimism. And if you can’t quite raise any optimism, well, perhaps the grumbling might cease for a while.

The team looked better balanced and was able to stifle Spurs. Which is fine if you want to stop the other team from scoring but not great if you want to push forward and grab a couple of goals. And if we do get into a position where we can make that old onion bag bulge we have to take them.

Fabio Borini had two good chances in the first half. Neither was clear cut but a player who was full of confidence and believed in his ability to score might have put one of them away. Alas, that is not poor Fabio. He tries hard, gets involved but rarely looks like scoring. Perhaps there is a realisation that he is not really a Premier League player and that he may be better off continuing his career at Sampdoria or Sassuolo rather than at Sunderland.

The first one was the culmination of a flowing move (we can produce the odd one) and a good pass by Defoe to play in his strike partner. But he needed far too long to control it and the Spurs defence was able to reorganise and block him.

The second time he got the touch and movement right but his half hit shot caused Worm little trouble in the Spurs goal. After that, he continued to battle away until replaced by George Honeyman in the 72nd minute.

But there was plenty to like in the performance.

It was welcome back to Lamine Kone and Didier Ndong after a three week break in Gabon. Ndong did play for his national side in what must have been a disappointing tournament for the home fans. Kone sat out all Cote d’Ivoire’s games as they failed to live up to their billing as tournament favourites.

Both played well last night. Kone looked like the player we signed last January and, unlike Papy, did not need John O’Shea to hold his hand and wipe his nose throughout the 90 minutes. That allowed the Irishman to focus on what he does and he did it well last night. He read the game well, won his headers and made his interceptions and, when he was turned, he knew that Denayer and Kone would be there to dig him out.

Ndong was busy in midfield and showed that, in a good team, he would be a valuable asset. With us and our non-creative midfield, he has an awful lot resting on his young shoulders. Maybe three weeks in Gabon makes him more appreciative of life on Wearside.

He was almost in a two man midfield as Lee Mason chose to show a yellow card to Jack Rodwell for his assault on Moussa Dembele when it could have very easily been a red. But Rodwell survived and had a quietly effective game sitting deeper and making sure that Eriksson and Alli did not have the open runs that they like so much. He may be getting closer to that elusive first win in the Premier League; hopefully on Saturday.

It wasn’t a great ga 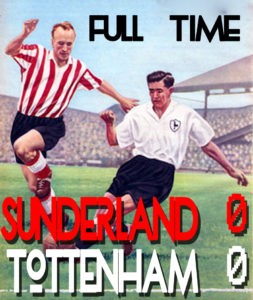 me but we showed that when we are organised, we can compete. This looks like the strongest XI we can turn out, with the possible exception of Oviedo for Manquillo and we will have to go with it and see what happens. The players looked happier and there was no bad tempered Dutchman on the field shouting at them and turning his back on the ball. We may have done a very good piece of business there.

And what about Spurs? They didn’t look like title winners last night and I was a bit disappointed in them. They have an excellent manager, some very good players and they appear to be a sustainable club as their new ground slowly grows. But next season, be it at Wembley or Milton Keynes, may just suck the life out of them and they could well regret draws like this as they battle it out for a Champions League place with the usual suspects. I was impressed with Wanyama – at just over half the price of the totally over rated Sissoko, the Kenyan is a man you can build a team around whereas with Sissoko all you get is the stench of money being burned – and we know plenty about that.

The window closed gently for us with no new forward and no creative midfield player. We have made some good signings in January (Kone, Andy Reid, Marcos Alonso) and some absolute stinkers (Prica, Kyrgiakos, Mbomba) so we may be as well off with Gibson, Oviedo and Lescott and save our pennies for the summer.

And so we go to the club I like least in the whole of the 92 and a reunion with Sam Allardyce (who never said a word about Sunderland when he left for his one game in charge of England) and Patrick Van Aanholt who made it clear that he didn’t want to play for us. They both deserve a club like Crystal Palace; no history, a ground that is not fit for the Premier League and fans who like themselves just a bit (lot!!) too much.

3 thoughts on “Sixer’s Tottenham Soapbox: Plenty to like in a hard fought game”