On a weekend off, if it’s too soon to do a relegation review (which it is), I’d normally take a trip around the Northwest and bring you up to date with the tribulations of clubs such as Blackpool, Bolton, Blackburn and even some who don’t begin with B – Morecambe being the most recent.

And that was my intention until I read earlier today that Green Go Waste won’t be making an appearance on Monday’s TV.

After we drew with Liverpool at New Year there were some very bitter people down here. Their failure to beat us was our fault because we were so dire, or something like that. And this kind of thing went on and on until, on FA Cup 4th round day, I found myself in an encounter with a group of LFC-supporting gobs**tes who were giving it large to a couple of Evertonians and myself before their mighty team demolished Wolves on their way to lifting the trophy.

I can’t describe them any other way, their behaviour was beyond normal banter, to the point of being obnoxious. I haven’t seen or heard them since, of course, given that their cup dreams, indeed their whole season, have disintegrated but the result of the encounter was to make me wish ill of their club. I don’t want Liverpool to win anything this season. I don’t even want them to qualify for Europe and I’ll be delighted if they don’t.

This isn’t usually the case; I’m married into the red side of Liverpool and if we can’t do it (and when can we?) I’d rather Liverpool win any competition than, say, the usual London or Manchester suspects. I’ve rather enjoyed the buzz and lift that has come from Liverpool’s success over the years, and haven’t minded their gloating at all (well, not much). I still wouldn’t go to see them, apart from when they play us, but we did take my sister and her husband to see “Beating Berlusconi” when it was staged to celebrate the 10th anniversary of their 2005 European Cup win and we had a great night. But not now, not this season. Not after the events of 28th January.

Even so, I stand firm with Liverpool FC on one thing – their attitude to the Sun. 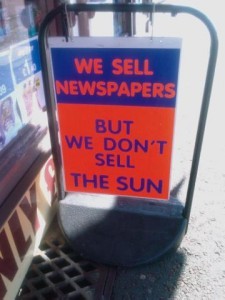 LFC have banned the Sun from its grounds.

It’s not a club thing, however. It’s a city wide movement and it’s not going away. Last September Merseytravel asked news vendors not to sell the Sun and you’ll now be hard-pressed to find it in a station. If you follow the link above you’ll see taxis are being branded (it’s not two,  as per the webpage, it’s now over 50, with the aim of having 96 done by 15 April) as part of a campaign which has, in modern parlance, gone viral. Visitors for our game at Goodison next week are likely to find the shops and pubs they visit shunning the Sun. We just don’t want it in any place in the city, or anywhere else for that matter.

Now, that said, it’s not for me to say how others should behave.  But while I can’t tell anyone what to do, I can tell them how I feel. And I feel really unhappy with Sutton United, who will be wearing special shirts, with a Sun logo, when they play Arsenal on Monday.

Sutton are, by all accounts, a well run club. They have a long and praiseworthy history and are deserving of anyone’s respect. They will be getting, and well merit, gate money, prize money, TV money and everything else that comes from a cup run.

So do they really need to sell their souls?

I’m sorry, Sutton United. As a neutral, I’ve always, always, wanted the underdog to do well in the cup. And I don’t particularly want Arsenal to win again because of… …oh, lots of reasons, mainly based on jealousy and anti-south irrationality.

3 thoughts on “Sutton United – What price integrity? What price your soul?”

Next Post
View from the NW Corner: Sunderland on course for European glory