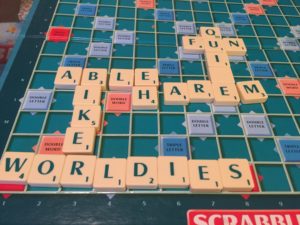 An outstanding Who are You? from Norwich is lined up, as is Guess the Score and the latest edition of Pete Sixsmith’s marvellous new series, The First Time Ever I Saw Your Team.

If you play, how strict are you about the words you allow?

I expected a challenge when I composed worldies last night. Luckily, Mme Salut was too tired to protest formally though she did call me a cheat. Maya, our granddaughter, is only eight and just wanted to know how many points I’d scored. That was the bit I liked: 128, once everything had been totted up (word itself, two triple word scores and 50 extra for using all seven letters).

Worldie, or its variant worldy, is not a word I was even aware of until a few years ago when people started using it to describe great goals or saves. I may have spotted it for the first time on these page in 2012, when a Swansea City supporter and blogger Peter Thomas wrote an excellent report, which we produced, in which he said his team had been beaten by two “worldies”, goals from Stephane Sessegnon and Craig Gardner.

But did that make it a legitimate word? I did make a quick Google check and the results of that cursory search ensured that my word stood.

Having won the game, I looked further. Of the online dictionaries, OED carries no mention of it. Collins defines worldie as North-eastern English for “a very attractive woman; also in sport, a world-class goal, performance, etc” but adds that its approval status is “pending investigation”. I must admit that I was completely unaware of the sexist usage.

Macmillan agrees it is an example of Geordie dialect for “someone or something that is very attractive, excellent etc”. The Urban Dictionary makes no regional reference but suggests two possible uses, the first of which some will find offensive: “that girl’s a worldie! (means she is hot)” and “this brew is a worldie (a top class cup of tea, worthy of a king).

On balance, it seems my matchwinning move was not only a Scrabble worldie/worldy but involved a widely accepted word. You may disagree or have better examples of disputed or disputable entries …