Who will be the top six clubs?

Over 1,200 people took part in the poll. There were 7,000+ votes cast,  from all over the country and further afield. That’s not a massive number but it’s good enough for me to use in picking teams to follow over the coming season (and it appears to be 15 times bigger than ticketgum seem to think is adequate for a survey).

So the chosen clubs, with the exception of Leeds, have some catching up to do. Will they manage it?

When I started this series my (dodgy*) numbers told me that an average of 1.92 points per game would lead to promotion, while 1.57 would lead to a place in the playoffs. That enabled me to come up with a way of tracking the progress of the clubs. Here’s the graph I produced in July, now with a slight tweak in the bottom left corner:

The little bit flashing on and off in the bottom left corner shows how much of the season has gone, and correspondingly how much remains. The Championship truly is a marathon. However, with a weekend empty of league fixtures and a freshly-closed window now’s a good time to take stock.

So here’s an enlargement of that bottom corner (in which I’ve changed the red and blue diagonals to black to avoid clashes with the colours of the club lines): 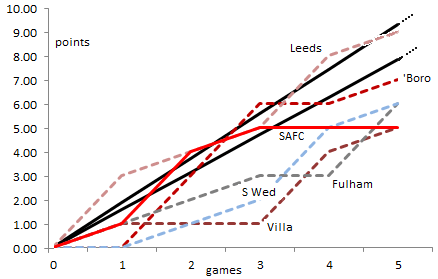 You can see that Leeds have been the most consistent performer – of the six selected clubs. They haven’t lost yet, have been above the promotion line more often than not, and have never been below the play-off marker.

After losing their first game ‘Boro picked up a couple of wins but have tailed off – or are they heading upwards again? However, they are not quite in the playoff zone and my  somewhat pessimistic ‘Boro-supporting neighbour reckons they should have done better from the fixtures they have had. So it’s not all brilliant there.

Sunderland did make it into the promotion zone but then slipped back, so much so that Fulham and Sheffield Wednesday have passed them and Aston Villa, who made a terrible start, have caught them. The comments following Pete’s match reports or score predictions tell me that Sunderland fans have no idea how this is going to go, but pessimism followed last Saturday’s defeat and it has hardly been lifted by transfers since then, although I and other readers, judging from their comments, see more positives than negatives in our goings and comings yesterday. (Pete Sixsmith will be giving his opinion tomorrow and his excellent analysis is a must of a read.)

I’m not the best person to comment on Fulham, Sheffield Wednesday and Aston Villa, other than to say that I’m surprised all three of them opened so poorly. Villa, it has to be said, had tough games piled one on top of the other and Fulham appeared at first glance to have played many of the same opponents. Maybe they’ll both come good. Sheffield Wednesday appear to have done worse against some allegedly weaker clubs although they did beat Fulham. Perhaps they are a bit more hit and miss, but what do I know?

Hopefully Owls fans, along with Villains and Cottagers, will let us know what they think – comments are always welcome.

Cardiff aren’t on the chart, nor are Forest, Wolves, Sheffield Utd or Ipswich. Perhaps they deserve to be, but that graph is complicated enough. Maybe, if they are still in position when I next revisit, I’ll find a way to put them in.

*McCormick’s dodgy numbers. The arithmetic’s correct, it’s just the rest could be a bit wonky

Next Post
Sunderland and the transfer window. How did we do?