Lime Street closed for three weeks on the day we played Preston and I suspect some of the direct trains that might have departed from there were surreptitiously removed from schedules in the months preceding. How else would I have found easy passage from Liverpool to Preston when mooching around in the relegation-threatened PDC days, and even when this season’s fixtures were announced, but nothing when trying to get there this weekend? 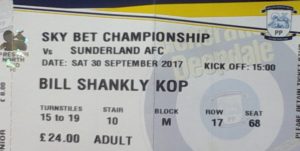 Ed was down, so we made a trip to Parkway to sort out tickets on the Friday, before an early start on the Saturday. Early because there appeared to be only one catchable train on the Ormskirk – Preston route and we couldn’t afford to miss it, and who knew what all the rearrangements in Liverpool would bring?

They brought very little, as it happens, with the result that we caught an earlier train than expected from Parkway, waited no time in the city centre for our connection, and ended up in Ormskirk with almost an hour to wait for the final leg to Preston. Too wet (hoying down) and too cold to take a walk around the town so we waited in the station. There are better ways of passing the time.

Preston provided an enjoyable prelude to the game. Decent, friendly pubs, good beer and (look away Londoners) a round for five people cost about £15, and that’s including a glass of merlot among the pints of real ale.

I was expecting more from Deepdale after  Pete’s piece. The photo I’d added to his post must have been taken with some kind of fish-eye lens because the ground was a lot squarer than I had anticipated. That said, there are a few premiership clubs which could take a lesson from Preston on how to fit in visiting fans. Plenty of space, decent seating, an excellent view of the whole pitch, and all at a decent price. My only grumble was that the only information for us came from an analogue clock. If, like me, you can’t recognise players and can’t read names on shirts some sort of screen giving information is a definite help. You can’t expect anyone to get it from a Tannoy, after all.

So as the teams ran out from the far end of the pitch, to great encouragement from our end, I was wondering who all these faces were, and what the line up would be. I’m still not sure, really, and that doesn’t help a match report, but here goes.

I could recognise Catts and Ndong from the start, and the imposing figure of John O’Shea behind them, and Kone by his absence, if you get what I mean. Billy Jones was in the line-up – he’s becoming familiar, and I picked out Gooch early on because he started to mix things up a bit, as did Vaughan. But what system were we playing? At one point it appeared to be three at the back, with Ndong and Catts dropping deep to support, at other times four across the back with Ndong and Catts still helping out.

Whatever system it was, it worked. John O’Shea belied his years as he held the line, and when the defence needed organising for free kicks and corners Catts did it well. Looking, talking, pointing, organising. There was never a loose player from Preston at any dead ball and we dealt comfortably with any threats that came our way in the whole first half.

Preston, for their part, never quite handled Vaughan, Gooch and (it transpires) Honeyman and McGeady. Vaughan might lack that perfect touch that characterises a top-class finisher but he puts himself about a bit and creates space for others to exploit. With McGeady’s ability to beat players and all of them running and working the ball they can trouble defences, as they did throughout the half. And it was a knockdown from Vaughan that let Gooch play in Honeyman for our first goal. Well worked from a free kick, and a well deserved lead.

The second half began with Preston piling on the pressure in an attempt to get back into a game they had never really been out of, and they didn’t take long to equalise. An attacking spell resulted in a free kick – I think it shouldn’t have been, but it was at the far end – outside the box. It didn’t look too dangerous but an excellent strike of the ball saw it curl around and into the top corner. Should we have saved it? Possibly, but sometimes these goals happen.

The goal gave Preston energy and they won the ball back, played it up field and had it bouncing around on the edge of our box almost straight from the kick-off. And when it came down there was Hugill in a perfect position, with time and space to smack in a shot that gave Steele no chance.

So, within a couple of minutes we’d gone from winning to losing and Preston had the wind in their sails. A recipe for collapse, as against Ipswich?

Not quite. Within minutes we’d equalised. Tenacious play saw McGeady win the ball on the edge of the box, then have the presence of mind to see a gap and curl the ball around the keeper. Cue more leaping and merriment in the away end.

And then we brought on Watmore

Maybe not match fit, maybe not a poacher, but he can run and he did it to great effect. Catts began to look for him, Vaughan began to run off him – I can see a good partnership developing – and Preston struggled to contain him. One of his runs down the left drew the keeper out of the box, arms flapping, to clobber him and also handle the ball. A free kick? A sending off? No, a booking for John O’Shea for pointing out that giving a throw-in was not an adequate response to such a blatant foul.

It wasn’t the only poor decision by the ref. There were a couple of penalty shouts that he turned down. Watmore may have fallen too easily for one of them but the other, when James Vaughan was the meat in a sandwich, was a bit more clear cut.

That makes it sound like the game was one-sided. It wasn’t. Preston continued to press; they even came closest to a winner with a shot that hit the bar, but we had taken that wind from their sails with the equaliser and we were tight enough to hold them in the last half hour. Oviedo came on after Jones took a knock, Williams had a cameo towards the end when he replaced Honeyman. Neither did anything to pep up the game in the way Watmore had but it really didn’t need a lot of pepping up, and they helped us to see it out. Good decisions by our manager

So, good end to end stuff and thoroughly enjoyable to experience. We’re not a finished product, though. Midfield needs more creativity and Ndong needs to make more of his passes count. He runs around to good effect but the end product isn’t always a killer ball. Vaughan works hard and McGeady creates chances but the forwards have more gelling to do. And the defence? OK yesterday with John O’Shea at its heart, but he’s not a long-term solution. Nevertheless, we showed promise and deserved our point – some will say we deserved the win – and I can see us building on it.

And then it was back into Preston and and the Corn Exchange (or is it now the Assembly?) for an enjoyable reunion (the last time was at a bitterly cold Wigan in the days of Titus and Fletcher) before the train.

I think there’s a good chance we’ll be repeating this fixture next year and I’d be happy to come back but I hope the trains are sorted before I do. On the trip back we stopped in the middle of nowhere while the driver and conductor checked the wheels and track after we hit a rabbit. Luckily, our 40-ton train managed to emerge unscathed. I kid you not. The delay meant we missed the connection and had another wait at Ormskirk. Hey-ho, you can’t have everything and I suppose the point will do.