John McCormick writes: It’s a team effort, here at Salut! Pete Sixmith was engaged with a non-League fixture so Bob Chapman stepped in with his seven word summary, which was sent to Malcolm, who used it to finalise the draft I’d prepared.

And now M Salut himself has forwarded Bob’s post-match report. For me, it carries a hint that, while there’s some way to go, we are at least beginning to create chances. That could be because I thought we did something similar at Preston, so I suggest you tuck into this excellent read, bear in mind that not all our players are fully match fit, and decide for yourself.

Who caused our relegation? Was it the incompetent F A, who played us along during pre season, with their appointment of Allardyce? Was it Ellis Short, who despite injecting money into the club, had made numerous poor decisions with regard to its running? Was it David Moyes who gave up before even starting the job? I am sure you can add to this list.

Whatever, we now find ourselves in a desperate position, similar to one we occupied 30 years ago.

At the height of the Peter Reid era, I thought we would never be relegated again from the top division. With the expansion of the ground I felt we would finally get back to the position my father always remembered pre 1958 when we were quite legitimately ranked alongside Arsenal and other such clubs that just don’t get relegated.

They say there is not much difference between the top half of the Championship and the bottom half of the Premiership. With that in mind, if you take out Pickford and Defoe from last year’s side, you have the equivalent of a bottom half Championship side, which is where we find ourselves today. 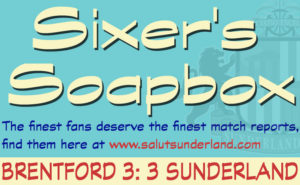 So, waking up on Saturday morning with just a short journey into London, I wasn’t that enthusiastic about the venture. I knew Brentford had a settled side and like to play good passing football. After so many disappointments this season I just felt that they would inevitably come out on top.

London matches follow a similar routine. We meet up for breakfast in the Tavistock in Bedford and then catch the fast train into St Pancras. On a previous visit to Brentford with my brother we caught the wrong train from London Bridge and ended up in Epsom! We missed the first 20 minutes, although in hindsight it was a bonus as we were awful and got dumped out of the Cup by a youthful DJ Campbell. With that in mind we headed to Waterloo which has a direct route to Brentford.

We started off in The Old Fire Station but with prices of £5 a pint we soon moved on. We found a little gem just 100 yards away called The Kings Arms. A nice quiet backstreet pub at the end of a long terrace of 2 ups and 2 downs. We had it to ourselves initially. A nice place to live we all thought until we found out that they sell for £1.3 million each! Still, it was a good choice and much better than trying to squeeze into one or all of the four pubs at each corner of Griffin Park.

Having run out of loft space for storing football programmes I stopped buying them two seasons ago. However, now in the Championship I realise I need to restart my habit as I no longer recognise most opposition players. Our line up was pretty much what I expected, although I thought there might have been a change with the keeper.

After a revitalising liquid lunch early morning feelings of gloom reappeared after only 8 minutes. Cattermole lost possession in the middle of the park and when a shot rebounded off a post Yennaris finished it off. Here we go again I thought! However we soon bounced back. A great through ball by Oviedo found Grabban. Holding off his man he finished in premiership style to get us back on track. There was nothing between the sides and with 5 minutes before half time we took the lead rather fortunately. A corner from Oviedo, in the swirling wind seemed to have come to nothing, only for the keeper Bentley to help it into the net. Rather fortunate I thought, if only we can hold on to half time. Christmas then most definitely seemed to have come early, when we further increased our lead in injury time when Grabbon got his second from the spot after an excellent run by Watmore.

Three points in the bag, I thought, as I fought my way to the toilets. A large Police presence was positioned behind the stand presumably to ensure that any exposed brickwork didn’t get wet! I had almost forgotten those days.

Memories of Palace away reappeared. However, that didn’t last for long as Josefzoon scored directly from a free kick. It was well struck but one which Pickford would have saved. Steele would have also, if he hadn’t have taken a step to his right when the ball was struck.

I know how this is going to end I thought. With Grabban and Watmore both feeling the pace we no longer had an outlet up front and were consequently being pegged back. The inevitable equaliser came in the 78th minute. It was a deflected shot which the keeper had no chance with.

Both sides continued to try to win the match and I thought if there was to be one it would have been Brentford. Fortunately we managed to hang on and I suppose I would have been pleased with a point beforehand. I applauded the team off although many didn’t and I can understand it as we have given up a two goal lead. However, I don’t see the point in booing and calling for the manager’s head at this stage. We have the players to get out of this mess. We are the top scorers away from home, but unfortunately we have the worst defensive record! If the manager can do an Allardyce and sort the back four out we will be ok.

I must admit it felt like a defeat as we walked back to the station. We made our way back to St Pancras and had a pint in the Betjeman Arms before getting the next train home. If we had won no doubt we would stayed out longer. On the train we remarked we hadn’t had a session for a long time and our wives were getting too used to their husbands returning home sober!

All graphics by Jake

Next Post
Sixer’s sevens. Brentford 3 Sunderland 3. Can’t hold on to a lead