Just as Sunderland supporters were given two reasons to smile – the dismissal of Simon Grayson demanded by so many and a sudden leap to the heady heights of third bottom – a quick look at the Championship results and table showed the other sick man of North-eastern football suddenly feeling a lot more perky.

Boro’s 3-1 win at Hull City took them to just outside the playoffs and reminds us of the scale of Sunday’s task with or more likely without a new manager. 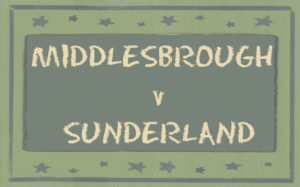 But remember Boro were in the bottom half almost the last time we looked. We may not feel particularly confident about the strength of Sunderland’s squad but it does show how a couple of good results can spark an uptable surge. Oh, and we’re unbeaten in four of the last five games even if winning still looks the sort of thing only others do.

Enough of the gallows humour, fantasy and false hope, you might say. So without further clutching at straws, let’s get the Boro vs SAFC Guess the Score on the road.

Wrinkly Pete’s faith in 3-3 results finally paid off – he’s still kicking himself for not entering it for Brentford – when Paddy McNair salvaged a point against mighty Bolton Wanderers.

A mug awaits him – and whoever is first with the correct scoreline for the Tees-Wear derby. Boro fan are as always welcome to enter and, in line with this season’s new rule for the competition, our Who are You? candidate’s entry is automatically entered.

Andy Falconer, one of several Boro fans in Monsieur Salut’s family (sister moved there when young), has done a grand interview, talking as eloquently as a Smoggie can about the similar pride and passion North-eastern supporters take in their clubs. He fears the worst for us after the Grayson sacking and goes for a 2-1 home win in Sunday. So that outcome is taken.

Have a go. First with the correct result wins a mug of suitable design.

13 thoughts on “Middlesbrough vs Sunderland prize Guess the Score: life after Simon”