Salut Sunderland: You beat us at the Stadium of Light – as most have done – and must have thought you were on course for the top six. Is midtable a big disappointment?

I personally think midtable is a massive progression from last season. I mean we stayed up on goal difference last season so it be a success if we are in midtable.

What is your assessment of the current management structure – Mark Warburton as manager, a Greek shipowner as owner and my part-namesake as chairman. The stuff of a bright future?

I like Warburton as a manager. I think after the last five years with the managerial changes if Warburton gets time to implement what he wants then I think next season we’ll be up there. I think what Marikias is trying to do is good after the last few years.

We’re still getting used to Championship players, including ours. Who is doing the business and who is underachieving for you?

It been quite an interesting one in respect of players. Barrie Makay is the bargain of the summer for me whilst Dowell is starting to shine. I think Murphy, to say we spent two million on him, has shown quality. Ben Osborn is underachieving for us this season.

What would it take – if not already dealt with – to get Forest back as a force in English football?

Stability is needed at Forest and to be built back up again. I mean, last five years with Fawaz our club has been destroyed so for Forest to stick by Warburton and build something special is needed.

If not mentioned above, how are our old boys – Murphy,who  scorer of the winner at our place, Vaughan and Bridcutt – faring?

Murphy has been a good buy for me this season. When we signed him up in the summer, my first opinion was why have we spent £2m on a 34-year-old but he has proved me wrong. Vaughan is another player who struggled at the start with injury and fitness but is proving to be a little Jack Russell. Bridcutt is starting to settle in well now.

Hand on heart, where will our two clubs finish?

I think midtable will be good for both of us to steady ourselves. Don’t get me wrong, if you guys do go down I think it will be a good thing as you can rebuild on a very bad few years.

If you answered the above positively and you at least make the playoffs, what is the potential for expanding or replacing the City Ground – arguably too small for sustained Premier League success – and are any plans afoot?

I think if Forest do go up, even if it not this year, we could replace the main stand and fill the corners in to make it more sustainable.

What about us – did you see our calamity coming?

I did, to be fair. Your guys had really bad few years in terms of transfers and managers which cost you guys massive. I think the players let you down as well but there’s always shining light.

Any other thoughts on Sunderland: the fans, the club, the area, Chris Coleman?

I think the fans that stuck by you are a positive as it has not been nice. The club needs to stabilize, like Forest do, with two years or so. The area seem to be a good one for you guys when I came up. Chris Coleman is a good manager for you if you give him the tools and time to do his job.

Your highs and lows as a Forest fan?

My high as being a Forest fan was getting promoted like we did. I ruled Forest out when we lost to Doncaster and Carlisle but the run we went on was brilliant. Man City away and Hull City games bring back memories. My lows – when we got relegated and the past couple of years with Fawaz.

And the best and worst you’ve seen in Forest colours?

When Forest beat Derby 5 -2, Man City 3 -0 and West Brom 3- 1, as that was the best football I saw under Billy Davies. The worst has to be the Derby day humiliations.

Lots of links but Brian Clough rises above all. What memories – handed down if you’re too young – do you have?

I was too young, lol, but watching I believe in miracles and hearing stories from family members it was a good time.

Your assessment of the standards of play and refereeing in the Championship?

I think the standard of play is quality in the Championship. I think it’s one of the best leagues in the world as it so unpredictable. The standard of refereeing is poor for me but I can go on about this, lol.

The Niasse question: are the authorities at last getting serious about diving and will the new retrospective sanctions eliminate it?

I think it’s been needed for a while pal, as standards dropped with players cheating their way to get penalties. I’m dead funny with penalties and if they should be given or not. Yesterday Sheffield Wednesday had a penalty and I said straight away it was. We should have had one, too; the standard of refereeing is not good. 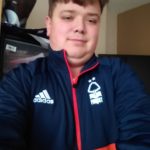 I am a season ticket holder at Forest and the founder of Talk Forest TV with the link down below. I’ve been following them as long as I have been alive and conscious.
https://www.youtube.com/channel/UCJnOYDq5sjDfdJL2Prh1i1A

Next Post
Nottingham Forest vs SAFC Guess the Score: redemption or repeat?