John McCormick writes: on Saturday Ed posted on his facebook page that it had been 378 days since he’d seen us win and then headed off to the SOL. Now you know who to blame.

But you can’t fault his loyalty. Stony broke, he and a mate once hitched down to Bramall Lane for an evening game. I’m not sure exactly when it was, or what the competition was but I think the weather was freezing and they were some of the very few who made the journey.

Pete Sixsmith had already been there, of course, and by an easier route:

The saga of Sixsmith’s Schooldays sails on with a visit to Sheffield on the 5th February 1966. I would have been in Year 4 at that ancient institution known as Bishop Auckland Grammar School and had progressed from the Lower School, once the Boys’ Grammar School and attended for a few months by one Stanley Jefferson who went on to better things in Hollywood as the more slender half of the Laurel and Hardy duo. I like to think of him bringing poorly schoolmates hard-boiled eggs and nuts and dreaming up schemes to give the money to the fish in his Business Studies lessons.

I had switched across the field to the old Girls Grammar School, once presided over by the redoubtable Miss Atherton and which (allegedly) had a sign on the dividing fence stating that “Intercourse is not allowed through this fence.” That would have been a challenge to some of the hormonal creatures on both sides of the great divide.

I was earning a little money by delivering Sunday papers and skimping on my bus fares from Shildon to Bishop Auckland. I must have squirrelled away some Christmas money and targeted this game as a do-able one on the train and so it was that I set off from Darlington Bank Top heading for Sheffield Midland on a chilly Saturday morning.

The main line to Sheffield split south of York and then ran down through Pontefract and into Midland station, passing multiple steel mills, grinders, cutlery manufacturers and filers and gravers. Sheffield in the mid 60s was belting out steel and associated products as if it were the 19th Century. Meadowhall, where now stands a cathedral to commerce was an area of steel manufacturing. The train sneaked between cooling towers, blast furnaces and small workshops before trundling into Midland, a rather splendid station even then and a quite superb one now. It’s a pity our support will not be able to use it on Boxing Day. However, the excellent Sheffield Tap may well be open….

In 1966 it was probably a WH Smiths bookstall and I may have purchased a copy of Reveille or Tit Bits rather than a pint of Thornbridge Jaipur IPA. I walked to the ground (it’s less than a mile), picking my way through the terraced streets and mingling with the locals; no problems with colours in those days as we only wore red and white scarves.

The Sheffield accent is an interesting one and is very different from the Leeds accent that I grew up with. There it was all “you” and “me”, move down to Barnsley or Rotherham and it is “thee” or “thou.” Get into Sheffield and it is “dee” and “dah” – in fact Sheffield folk are known as “dee-dahs” by those from the less enlightened satellite towns; they are called “dingles” by the theoretically more enlightened occupants of South Yorkshire’s major city.

The game was a cracker and I remember it well. Welsh international winger Gil Reece put the Blades ahead after 2minutes only for Langley Park’s finest to level in the ninth. Reece made it 2-1 in the 14th and Gauden countered with a second equaliser after 33. To cap an exciting second half, Monty saved an Alan Woodward penalty in the 41st minute – and that was the end of the scoring.

The Blades team was;

The highlight of the day was the trip back as we caught a Diesel Multi Unit from Sheffield to York. As Sunderland supporters crammed on board the second class carriages, the team came and sat in the first class which was very similar to the first class arrangements on Trans Pennine Expresses i.e. limited and at the front. The older players took their seats behind the driver and rested their weary heads on the anti-macassars while the younger members had to sit with the plebs in the ordinary carriage.

Alan Black, a full back signed from Dumbarton a couple of years earlier sat next to me and chatted all the way back to York. He talked of how he enjoyed living in the North East, what he thought of Jim Baxter and Ian McColl, how he hoped to progress and what it was like playing for Dumbarton. He took my programme into the rest of the team and they signed it, making me Number 1 boy amongst the Sunderland supporters at school on the Monday.

Black only played 6 games for us before moving on to Norwich City where he was a regular for a number of seasons. He played in the 1967 FA Cup ties and won a Second Division Championship medal in 1972. His small act of kindness was greatly appreciated by a 14 year old going through the pangs of adolescence – something which he (the small boy, that is) has never quite shaken off. 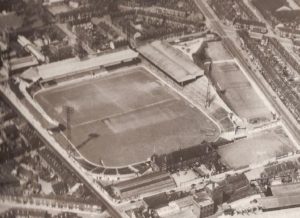 The ground was fascinating in that it shared football and cricket a la Kingsway at Bishop Auckland. Cricket had been played there since the 1850s and for 30 years it was the headquarters of Yorkshire County Cricket Club until they moved to Headingley in 1893.

Along with The Oval, it is the only stadium in England that has hosted international football and Test Match cricket. The single test was an Ashes one in 1902 which saw Australia romp home by 143 runs with the English selectors blaming poor light caused by the smoke emitted from local factories.

The cricketers left in 1973 after a drawn Roses match and the football club took over sole occupancy with the cricketers being banished to Abbeydale Park. It is now an impressive stadium with four modern stands, although the South Stand, built on the site of the old Pavilion, is looking a bit tired.

I have seen some good games there over the years – a wonder goal by Alex Sabella in 1978, a great win by Dennis Smith’s team in the early 90s where Marco scored twice and Paul Bracewell was simply superb and a great win a couple of years after the one written about when Gordon Harris and Colin Suggett gave us two valuable points and pushed the Blades into the relegation zone.

They played well at The Stadium in September but have struggled recently and this will be a good test of our credentials as an improving team. As always, we travel in hope………

The photo of Bramall Lane was found at the excellent http://www.stadiumguide.com/bramalllane/.  If there is any copyright claim, not answered by ‘fair use’ exemptions, on this or the images Pete uses to illustrate his report, please make us aware and we will add credits or remove as requested …

It’s not just Pete and other Sunderland fans who travel in hope:

6 thoughts on “The First Time Ever I Saw Your Ground: Sheffield United.”