Pete Sixsmith’s legendary journey around the years continues with a trip to England’s second city and 1976. That was the year the queen went to Birmingham to open the National Exhibition Centre but she doesn’t post anything on this site (at least, not under her own name) so we won’t be getting her reminiscences.

As if we needed them. Cue the chant…

It would be stretching the imagination to call St Andrews a fine stadium. Even now after extensive rebuilding, it looks slightly shabby and down at heel and I suspect most Blues fans like it like that and see themselves as the downtrodden proletariat compared with their patrician and rather snooty neighbours across the city at Villa Park.

Hemmed in between railway lines and surrounded by terraced houses, it reflects the area that City comes from. Founded as Small Heath Alliance in 1875, they dropped the Alliance, became Small Heath and were the first football club to become a limited company. The Heathens joined the newly formed Second Division of the Football League in 1892, along with Ardwick (who became Manchester City), Darwen, Northwich Victoria and Bootle and promptly won it. However they lost the Test Match to another bunch of Heathens from Manchester (Newton Heath) and had to wait another year before being accepted into the First Division.

At this time they were playing at Muntz Street, just off the Coventry Road and they stayed there until 1906 by which time they had outgrown their original home, so the directors purchased land in Bordesley to build St Andrews. It was erected on the site of former brickworks and took its name from a nearby church. Middlesbrough were the first visitors on Boxing Day 1906 and they played out a goalless draw in front of 32,000 spectators.

I never made it to Muntz Street and I didn’t make it to St Andrews until the 11th December 1976, 70 years after it first saw football. By this time, I was teaching at Ferryhill Comprehensive School, splitting my time between the Upper School along Merrington Road and the Lower School at Broom Cottages. The students who were taking their GCEs and CSEs that year will now be in their late 50s while the fresh faced youngsters starting out at Secondary School will have recently entered their sixth decade. So where does that put me?

We were back in the top division that year after a battle to get out of the second that had taken six years and had encompassed an FA Cup win and our sole sojourn in European football. Promoted as champions in the May, by December we were struggling and had jettisoned a manager and several of the players who had got us up.

The season had started reasonably well with creditable draws at Stoke and at home to Leicester and Arsenal, but the wheels began to come off the bus with successive defeats at Bristol City and Middlesbrough. Bob Stokoe had stuck by the players that had won the Second Division title but after a third consecutive defeat at Maine Road, he brought in Alan Foggon and Jim Holton from Manchester United to bolster the team.

Foggon joined Stan Anderson as the only post war player to play for all three of the Big Teams, although his stay at Sunderland was a bit like the political career of Henry Bolton – short and undistinguished. Jim Holton came with a fearsome reputation and a great song (“Six foot two, eyes of blue, Big Jim Holton’s after you, na,na, na,na, na,na, na, na, na, na).These two were later joined by Bob Lee and Barry Siddall as we slipped to our traditional position in the relegation zone.

It was all too much for Bob Stokoe who resigned after disappointing home defeats to Everton (a game remembered for Joe Bolton dumping George Telfer on the running track at least four times) and Aston Villa where Siddall (complete with John Cleese moustache) made his debut and was beaten by Alex Cropley with fifteen minutes left. Stokoe resigned and the board, showing all the decisiveness and ambition that we have come to expect from the custodians of our great club, appointed first team coach Ian McFarlane as temporary manager.

Things did improve a little. We had our first win of the season at Coventry, drew at Old Trafford and managed to beat Tottenham at home before we slumped again and by the time we went to St Andrews there was a new man installed in the wood panelled managers’ office at Roker Park.

In their wisdom, the board turned to Jimmy Adamson. He had played for and managed Burnley, leaving Turf Moor as they fell out of the top flight as we got back into it. A short stint at Sparta Rotterdam followed before he was given the unenviable task of keeping Sunderland in the First Division. His first game was at Birmingham so off I went in the company of a couple of chums and a green Citroen 2CV6. This was owned by the estimable Jim Reeve, an exiled Norwich City supporter living and teaching in Bishop Auckland who had wisely adopted Sunderland as his North East team.

The 2CV got us there and back with no difficulties but I compare it and the one I bought six months later, with the vehicle I drive now and I wonder how on earth it ever ran. The windows opened up over and were fastened open by a stud; the “air conditioning” was a grille underneath the windscreen, the roof would fold back (although we did not attempt this on a bitterly cold December day) and the fuel consumption was up in the 50 mpg bracket. It could not be described as a comfortable ride. We parked somewhere near the ground and stood behind the goal with the other hardy red and whites in the 24,997 crowd, looking at the huge covered terrace that ran down one side of the ground, dwarfing the rather low main stand.

City won it with goals from Jones in the first half and Francis just after the break. The latter was now an experienced 22 year old, having made his debut at the age of 16 and becoming an overnight goal scoring sensation. In his first season, he scored four goals against Bolton and played a major part in firing The Blues back into the top flight in 1972. He was a player I always liked and he had an excellent career, going on to play for Nottingham Forest, Manchester City, Sampdoria, Atalanta, Glasgow Rangers, QPR and Sheffield Wednesday. He was, of course, the first £1m footballer when he moved to Forest in the days when clubs – even erstwhile European Champions – had to think very carefully before they broke any transfer records.

City were comfortably better than us on the day and it took Adamson another eight games before he got his first points and his first league goal from a Sunderland team. By this time, he had jettisoned the likes of Foggon, Malone, Holton, Train and Hughes, signed a couple of his former Burnley players in Mick Docherty and Colin Waldron and flung in Shaun Elliott, Gary Rowell and Kevin Arnott, in a desperate attempt to keep us up. It almost worked but the wretched figure of Jimmy Hill loomed over us on that final Thursday night at Goodison Park. 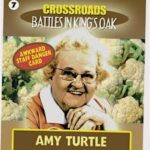 The Trevor Francis video was found at https://www.youtube.com/watch?v=m6J3Lk3dP0U, posted by Birmingham City FC

The Amy Turtle video was found at  https://www.youtube.com/watch?v=3qqCRaHGMmA, posted by CrossroadsFanClub

2 thoughts on “The First Time Ever I Saw Your Ground: Birmingham City and St Andrews”

Next Post
Birmingham City vs SAFC Guess the Score: two in a row?