John McCormick writes: every footballer and fan should be honoured to visit a club like Bolton Wanderers but I’ve never been there. I’ll be remedying that on Tuesday, however, so if my former OU colleague Brian (a diehard Wanderer who will surely relish the magic and nostalgia of Pete Sixmith‘s prose) fancies a pre match pint it would be great if he got in touch via the comments at the bottom …

We have two for this one as I saw us play Bolton at both Burnden Park and at their sponsored stadium at Middlebrook. Both first timers saw us win so a repeat performance this time would be more than welcome. 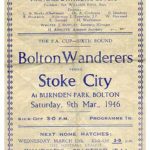 My first visit to Burnden Park was in 1970 and the stadium had seen better days. Built in 1895, it was one of the biggest in the country and was used for representative games as well as being borrowed by the Rugby League for finals and internationals. It was handy for the town as well, being a twenty minute walk along the Manchester Road and in its heyday, you can imagine flat capped Boltonians walking to the match, ciggies in hand full of Magees Beer, hoping to see Nat Lofthouse or Doug Holden scoring while Tommy Banks and Eddie Hopkinson kept them out at the other end.

When I first went there, those days were long gone and The Trotters were heading for Division Three. We were coasting along in the middle of Division Two, blooding young players and looking forward to better times under Alan Brown. The Easter Friday and Saturday had been good for us; a 1-0 home win over Orient thanks to a blockbuster from Dick Malone and a solid 2-2 draw at Ayresome Park where Billy Hughes and Dave Watson had put us ahead only for Joe Laidlaw and John Hickton to level before half time.

I borrowed the family car for this one, a Vauxhall Viva, purchased from Consett on the day that Dave Watson made his debut the previous December. 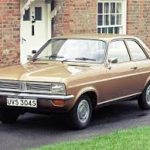 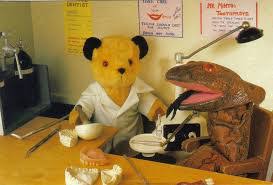 It was a decent vehicle and I drove some old school chums to Bolton via the town of Ramsbottom. We liked the sound of the place and it was also the name of the lugubrious Yorkshire snake in Harry Corbett’s Sooty programmes.

We had seen the Sooty Show at the Sunderland Empire and were disappointed that Ramsbottom did not feature more amongst the antics with hammers, ink and shaving foam.

The crowd that day was a paltry 5,937 as Wanderers were stuck at the bottom of the table and eventually went down to Division Three with near neighbours Blackburn Rovers. We stood in the paddock underneath the one time splendid Main Stand and stared at the well-known advert for The Pack Horse Restaurant in Nelson Square (it’s now a Pizza place).

It was Maurice Hepworth’s debut and the Hexham born full back played his final game at Sheffield Wednesday six days later. He suffered life threatening injuries when he was kicked in the stomach during a reserve game and never played for Sunderland again. A short loan spell at Darlington followed before he went off to South Africa and he is there to this day. 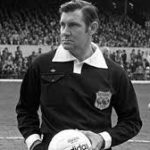 Incidentally, the referee was Jack Taylor, probably England’s premier referee of that period who went on to be the man in the middle in Munich when the Federal Republic of Germany beat The Netherlands in the 1974 World Cup Final.

He had a butchers shop in Wolverhampton so he had presumably spent the morning making sausages and rolling brisket for his customers. Can’t imagine Andre Marriner doing that – although a pound of sausages would probably be a better referee.

Dennis Tueart put us ahead in the 36th minute only for us to continue our habit of losing the lead quickly when Roger Hunt levelled three minutes later. But we coasted it in the second half and a double strike from John Lathan in the 53rd and 65th minute wrapped up the points for us.

Lathan was a real home grown product and never let us down. He scored in his second appearance against Southampton and was destined to be an understudy to Dave Watson and then Vic Halom. Best known for a hat trick against Portsmouth (a game played on a Wednesday afternoon due to the Heath government falling out with the power workers) and a scintillating pair at Derby in a League Cup tie in October 1973, he moved on to Mansfield as part of the deal that brought Dennis Longhorn to Roker, followed by stints at Carlisle, Barnsley, Portsmouth and a hero’s return to The Stags.

Twenty seven years later, an older and sadder Sixer, I paid my first visit to the brand new Reebok Stadium, situated in the charming retail park at Middlebrook, closer to Horwich than it was to Bolton.

Horwich was a former industrial town, famed for its weaving and general industries but it became a mirror image of Shildon when the Lancashire and Yorkshire Railway moved their locomotive works from Miles Platting in Manchester in 1899. The building of steam and diesel locos continued until the late 50s when it was reduced to repairing locomotives and wagons. The axe fell at the same time as it did at Shildon, with the Conservative government closing both sites in 1983. The local football club, Horwich RMI struggled on before decamping west to Leigh and becoming Leigh RMI. They spent a couple of years in the Conference before disappearing in the early 2000s.

This ground is an interesting one. It is clearly visible from the adjacent M60 and has a distinctive style. The stands are curved and are joined up and the floodlights seem to hang in the air. When we arrived there on a Sunday in early November, they had settled well after promotion and were pushing for a promotion place. 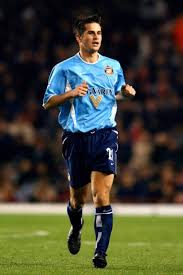 Paul Thirlwell made his debut in this game and looked neat and tidy. Having Kevin Ball alongside you is a great way to start your senior career. He is now the assistant manager at Harrogate Town who are putting real pressure on Salford City at the top of National League North.

For John Mullin, it was almost the end of his Sunderland career – he was to play one more game, two days later at the mundane Gretsy Road, home of Crewe Alexandra. He was an inspired signing by Peter Reid who always did well in his first team appearances and is best remembered for a stunning goal at Portman Road in August of 1998.

Bolton, managed by former Sunderland hero Colin Todd had a distinctly Scandinavian look about them; 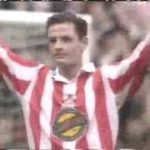 It was a doddle. Johnston put us ahead in the 27th minute, Quinn doubled the lead in the 34th and Micky Bridges wrapped it up with seven minutes left. I drove home that day convinced that we were on the threshold of genuine success and for three years we were until the Reid bubble burst and we slid back into The Championship (or whatever it was called then).

We only lost three games after that one as we stormed the league and won it with 105 points. Look at the players in that team and compare them with those we have had for the last three or four years. That indicates how far we have fallen.

I am writing this before the Brentford game so it is to be hoped that we have taken three points from the Bees. We will need to do the same against Bolton, now without leading scorer Gary Madine, but making a better fist of getting out of the bottom three than we are.

The Nat Lofthouse tribute was found at https://www.youtube.com/watch?v=Y-HucPWE7Bs, posted by FATV in 2011. If there is any copyright claim, not answered by ‘fair use’ exemptions, on the images used to illustrate this report, please make us aware and we will add credits or remove as requested

JMc writes once more: I’ve now read Pete’s Brentford report. Perhaps instead of going to the Macron, I should be spending 90 minutes watching this:

(the embankment scene can be found at https://www.youtube.com/watch?v=Ckpk-OLwm0k. Video published by Kenneth Barhorst  on 30 Mar 2017)

6 thoughts on “The First Time Ever I Saw Your Ground: Bolton Wanderers, Burnden Park and the Macron”

Next Post
A View from the Avenue: have the miracles run out?