John McCormick writes: I’d really have to think hard about whether or not I’ve seen us play ‘Boro at Roker. Away, yes – I’ve been to Ayresome Park – but I have no recollection of any game against them at home. I wouldn’t have been at the 1961 game Pete describes below, being only 10 at the time (my SAFC career began about the time Cloughie’s ended and I never saw him)  and for much of the sixties I think we were were in different divisions.

Even so, this series by Pete Sixsmith is beginning to make me think my memory is seriously deficient.

I blame the drink. I’m clearly not getting enough

This will be the earliest episode in this interminable sequence with regard to watching Sunderland, because it was Sunderland v Middlesbrough at Roker Park on the 11th November 1961 that was my first sight of the lads in red and white stripes. Little was I to know the misery and angst that was to come for the majority of the next 56 years….

My family had moved from Leeds in the January of 1959 when my father’s job with the Regent Oil Company (now Texaco) brought him here. We settled in Shildon as there was a house available in the same street as the man who owned the Regent garage in the town (Freddie Davison for any Shildon readers) and they bought it for the then huge sum of £3,500 with help from the Halifax Building Society. As rugby league diehards, football never appeared on our radar but as the nearest rugby league was at Clarence Street, York and even then rugby union struck me as an incredibly dull and pompous game, I gravitated towards football. 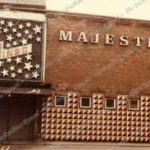 I went to a few games at Shildon and, through a burgeoning friendship with Colin, sold programmes at the corner of Dean Street and Primitive Street. I also went to Darlington in the company of our local corner shop proprietor, Mr Corner (honest) and (very) occasionally with my dad.

As well as looking after the welfare of numerous Regent retailers (George Hardwick was one of them) my father was a very good pianist and had always supplemented his income in dance bands, trios and whatever came along. Looking for gigs in South Durham, he was quickly picked up by Frank Abbott, who was the band leader at the Majestic in Darlington. As well as catering for the terpsichorean pleasures of Darlo’s young ladies and gentlemen, they also accompanied various stars of the day like Rory Storm and The Hurricanes (drummer one Richard Starkey – I wonder what happened to him) and Bert Weedon, of Play The Guitar In A Day fame.

Frank Abbott was a Boro fan and he talked my dad into going with him to the game at Roker on that fateful day. I was allowed to go, already having an affinity with Sunderland as Colin was an avowed supporter and had even been a couple of times. Plus, the Regent regional office was at Hudson Dock in the then town and I had often been commanded to walk up to the post box to drop copious envelopes into the gaping red slit. And even at that age, I couldn’t stand the Mags.

So off I went in the back seat of what I think was a Ford Zodiac, on my first visit to an almost top level football match. I remember nothing of the journey or where we parked or which pub I stood outside of drinking pop but I do remember walking into the Roker End, up those steps and onto the terracing and having to take the proverbial sharp intake of breath as I looked at an almost full Roker, the pitch green and the Main Stand looking wonderful with its Archibald Leitch trellises. I was hooked and from that moment on, Sunderland was the team for me and all the others (with the exception of Shildon) were of no significance whatsoever.

Harry Hooper was a pacy little winger from Pittington who had had a good career with West Ham United, Wolves and Birmingham City. He scored goals and, on his day, he could torture full backs. I met him at a do in the mid 90s when someone had got most of the 1963-64 promotion side back together. I knew he was a player but couldn’t recognise him so I asked him who he was I’m Harry Hooper he said and he seemed delighted when I said that I remember him scoring the winner against Portsmouth in 1962.

Middlesbrough pulled one back in the 57th minute through their inside right, Arthur Kaye but he managed to get himself sent off ten minutes later and we held on for an important win which kept us in third place in the table.

There were some good players on show for the 48,248 in attendance. Hurley and Fogarty were Irish internationals, Herd played for Scotland and three of the visitors ended up with England caps – McNeil, Peacock and Holliday. Hard to imagine a mid-table second tier club doing that now. (And let’s not forget that Brian Clough was capped twice in 1959 – JMc)

We would have listened to Sports Report on the way home and chuckled as Chelsea remained at the bottom of the first division despite beating Bolton 1-0 while Liverpool were beaten by Luton to give those chasing them (us) some hope. We got home for our teas and probably settled down to watch television, although it was more than likely that my dad went to tickle the ivories at The Majestic. Had we stuck to the BBC (just two channels in those days!) we could have feasted on these programmes;

Dixon of Dock Green with Jack Warner in the title role, looking 30 years past retirement age and Peter Byrne (touring until quite recently in various courtroom dramas where he could remain seated for the duration of the performance) as Andy Crawford. Coral Atkins appeared as Lily Taylor, a good time girl if ever I heard of one.

The Festival of Remembrance from the Royal Albert Hall narrated by Richard Dimbleby.

We could ask ourselves is that fare any worse than the tosh that is served up on Saturday nights now. The football is certainly no improvement, that’s for sure.

West Ham v  Cardiff found at https://youtu.be/7P-1f7gU8UY, posted by British Pathé , Apr 2014. If there is any copyright claim, not answered by ‘fair use’ exemptions, on the images used to illustrate this report, please make us aware and we will add credits or remove as requested.

2 thoughts on “The First Time Ever I Saw Your Team: Middlesbrough FC”